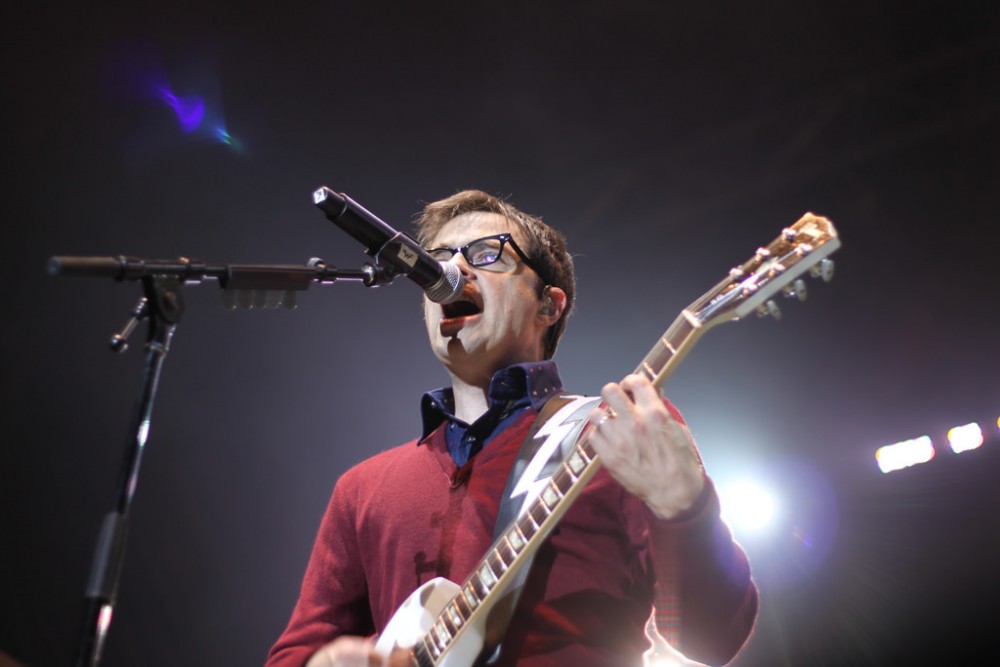 I will start by saying that the folks over at brand.LIVE pulled together one hell of a festival. Going in I was expecting a decent time, but by the end I was infatuated with every aspect of the experience. This was the sleeper hit of the summer; a sentiment shared by the majority in attendance. Every band gave stellar performances, that were inspiring and passionate. The weather was perfect, providing an epic backdrop to the entire weekend. LIVE at Squamish was a truly memorable experience.

Arriving on day one, we were greeted by the sun kissed mountains and smiling, eager faces. Our plan of attack was simple; two days of intense musical interaction. We proceeded to our first act, those Toronto based pop-rockers known as Sweet Thing. Their set was energetic, and fueled the crowd into a dancing fit. Owen Carrier, lead vocals, is definitely the meat in this sandwich. He brought a charismatic, substance to the entire conglomerate. By the end of this Canadian quintets presentation, many were ready to rock the day away.

Through out the entire weekend, slam poet Shane Koyczan kept fans revved up with his unique style. His poem were personal and powerful. Delivered with a ferocity and passion that left goosebumps spread across the crowd. In particular his piece titles This Is My Voice, had many in tears and in general had those in attendance extremely emotional. He is a master at what he does. He could be seen walking around the field, during the day. Getting high fives and hand shakes from those who spotted him. He is a modest man, and we all tip our hat his way by the end of the weekend.

Next up to the docket was the Emily Haines and James Shaw acoustic set. Wow was this such a vulnerable performance. Emily sat at her black baby grand as James strummed away on his guitar, atop a bar stool. The vocals were tender and delicate, a real intimate feeling spread throughout. The audience was quite for the entire performance. That is up until they picked things up, and brought some beats. By the end the entire congregation of music lovers was swaying and chanting along. It was a great set.

We then worked or way back to catch Hey Ocean!. I have no real prior experience with this group, but I was blown away. Ashleigh Ball, the lead singer, is a blonde bombshell that had many staring in lust. But this is no trophy singer, she is powerful. Her voice is full of soul and the rest of the band play so well of of her. These guys really grabbed my attention and had me eager to hear everything they have released (which I acquired once I returned home). It was a short lull between the next act, as we sought out Kyprios. His stage presence is captivating. He darts to and fro with a frantic energy. He was a great addition to the lineup, adding a needed breakup in the indie rock sound of the day.

The two main acts of the night, were what really set this festival apart. Starting with John Butler Trio. They played such a intense and memorable set that it was not only my favorite of the weekend; I can quite honestly say this was my favorite festival performance ever. The trio had this depth that I for one cannot feel on their recorded material. I tried and tried to find an album that showed the spark they displayed, but I was unable to. They pulled out all their stops and proved they are a force to be reckoned with. John Butler laid into this 10 minute guitar jam solo that left most of us weak in the knees. Even as I write this I am still getting goosebumps just thinking about it. JBT is a band that you need to see live.

This leads up into Girl Talk. You have heard the hype, we all had, but could he live up to it. The short answer is – yes. He blew this place apart. His mixes are done in such away that they are widely palatable. You don’t have to be digitally obsessed to absorb and enjoy his tracks. The stage was a complete zoo of activity. When the first note rang through the speakers, two figures emerged with toilet paper guns and started coating the crowd with rolls and rolls of paper goodness. Then came the three dozen dancers. Not professional dancers just average people up on stage having the time of their lives. It was an amazing experience. Girl Talk had the entire field fired up and in chaos. That was pretty much day one, we came we saw, we were flabbergasted.

The beginning of day two was no different, much more of the same. From one stage to the other, we experienced many delicious tracks being dished out by world class performers. Many of which were Canadian made. To start our day off we witnessed a laid-back set from Brasstronaut. Not many bands these days have trumpeters and other such wind instruments, but these guys tie it together so well. After the hectic party of the night prior, this jazzy indie-pop was perfect. They were a joy to photograph as well, because they stayed still for a good period of time.

From there it was on to local group The Belle Game. These guys are great. Anyone out there that has seen them can tell you they have a big road in their future. They play with a that very captivating orchestral sound. And we all know how well that does for Canadian bands (ie Arcade Fire, Hey Rosetta!). Their set was organic and very entertaining. It was an immediate jump to The Dudes. They brought their Calgarian attitudes to the stage and got the energy picked back up a little. They even took time to shotgun a beer. How can you not love a band that takes the time to do that.

One of the biggest shows of the day, or at least the one that had the masses tweeting with anticipation was Panda Watch. This was a vessel from which emerged the members of Said The Whale. For whatever the reason, they could not play the festival as Said The Whale, or chose not to. Instead they came out in panda masks and played the set as Panda Watch. After the end of the first song the tore off their masks and confirmed the rumors. From then on in it was a taste of their new material. The reception was spectacular, so was their set. These guys know how to have fun.

Here on in it was all main stage action for us. Let’s start with the performance by Black Mountain. As always they were calm, cool and ready to rock. Their psychedelic rock had the crowd eager to light up with enthusiasm. Near the end of their set, there was a little hiccup when a stage hand actually walked on stage, between the crowd and the band and told them they had one last song to play. It was strange to see. Must have been an issue with communication. Regardless it did not hinder their set, and the show finished up without a hitch.

Next up Metric came out for their set, ready to pounce. They played with a great energy. I kept wondering where Emily found this fuel from. She is such a petite woman, but has the power of a bull. Her vocals were right on the ball. Her front-woman persona had her strutting in front of the 30 something photographers at her feet. Turning and posing, giving the media what they wanted. The crowd below screamed with delight, and sang along to every song. This must have been the sixth time I have seen Metric play, and I must say this was their best performance. It was solid and I was ecstatic to bear witness..

Finally, we have the big dog of the show, Weezer. If you have not been to a Weezer show then you sir/madam are missing out. They play amazing live. Rivers is such a ham on stage. At one point he kicked up his soccer ball and started doing tricks. The pinnacle of their entire performance were two cover songs they played. One was Pumped Up Kicks by Foster the People and the other was Paranoid Android by Radiohead. These two songs sent electricity through the crowd. Rivers and crew brought their A game and rocked into the darkness. You would have been hard-pressed to hear an unimpressed comment uttered from the lips of those in attendance.

So that my friends is a brief summary into the festival. It was amazing, the bands were killer, the sun was shining and the crowds were pleasant. The only two complaints I have are about the merchandise. One, they need to have a poster for this event. This is a staple for festivals, something everyone wants when they spend their weekend rocking out. Second, they need to have a greater selection on their merchandise. From what I saw there were a couple t-shirts, hoodies and some buttons, that is not nearly enough. People that go to these type of events have many to spend. If you don’t give them an outlet, they will go home with money in their pocket. Which is what I did. But this is a tiny, minor bump in this nearly perfect weekend. To those at brand.LIVE, thank you so much for the amazing weekend. We can not wait until next year.

One last thing, we did our first Live Reporting of this event, which went really well. You can check it out here at Live from LIVE at Squamish.