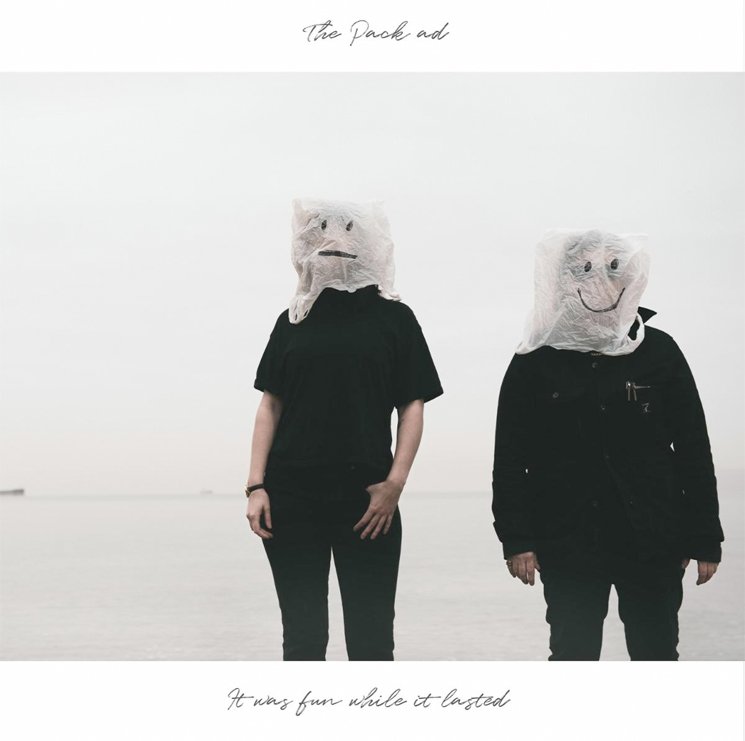 ‘It was fun while it lasted’ is a masterpiece.

The Pack a.d., one of the galaxy’s most bafflingly underappreciated rock bands, may have just released their very last album (their eighth in 13 years) and it currently shines blindingly bright as the bands white dwarf in their awe-inspiring body of work.

It is sad that, for all The Pack a.d. has put into everything they love, most of the world has taken for granted the hardest-working duo to come out of Canada. Their 2017 masterstroke, ‘Dollhouse’, could have easily served as a parting gift—it is required listening and should be issued to any Vancouverite that does not yet own a copy. Three years later, it is bittersweet how the lyrics to that album’s closing waltz, ‘I Tried’ (“I’m not givin’ up, just givin’ in”), have foreshadowed album opener and powerful lead single, ‘Give Up’ (“Say you give up, I give in”)—with crushing honesty as brutal as the deafening distortion during the chorus, it’s beautiful… and it hurts (is this gem seeing rotation on local rock radio, yet?)With heavy hearts, unabashedly baring their souls on ‘Give Up’ as well as tours to support the new album on the horizon, Becky Black (Guitars/Vocals) & Maya Miller (Drums/Vocals) have never taken their music, nor their fans, for granted. Like a couple of badass rock ‘n’ roll minstrels wandering through our ever-present dystopia, The Pack a.d. may only perceivably be ahead of their time because of how far behind things have been allowed to get (with an ancient music industry somewhat lounging all-too-comfortably in the dark ages.)We are overjoyed that they have decided to come back fighting (again) in typical Pack a.d. fashion with ‘It was fun while it lasted’.

Recorded and mixed by Jesse Gander at Raincity Recorders in Vancouver, save for one of a dyad of instrumental road tales, ‘Check Engine Light’, which was recorded by Jim Diamond in Detroit (both of whom have had been working with the legendary Pack since their sophomoric album, ‘Funeral Mixtape’ and ‘we kill computers’), IWFWIL retains all the chemistry of Becky’s trademark howl and unmistakably raw guitar sound as well as Maya‘s door-slam and thunder-crash while continuing to dig even deeper into the sonic depths tunneled from their previous collaborations together. These musicians have this down to an art. There is no question that one of the many reasons that this album demands to be listened to with headphones (or on the road) is thanks in no small part to Gander, with whom appears to be something of a sorcerer behind the mixing boards.

You’d think they had planned it. Despite the fact that the title of the album (along with some of the eerily apt track names: ‘It’s Okay’, ‘Change Kills’) and the cover photo itself may lead some to conjure up feelings of the very purgatory the world is going through right now, these choices were actually agreed upon well before our current situation. Need further convincing that The Pack a.d. are clairvoyant? Try listening to penultimate (for now) album ‘Dollhouse’ whilst trying to figure out the new norm. These artists deserve their due dignity for keeping relevant at the same time as maintaining their creative integrity.

The biggest surprises may come from the more vulnerable moments on the album, which commit to tape some of the finest, most dynamic vocal performances from Becky Black, singing some of the most thoughtful, introspective lyrics from our all-time beloved pair of introverts… but don’t be fooled: Becky’s mind is impenetrable, even going so far as to caution any would-be mind reader to “stay out of my head” over-and-over again as we segue into ‘Reprogram’, the bands simmering follow-up single from IWFWIL. (We do discover later on in the track ‘No Good’, my personal favourite from IWFWIL, that Becky does eventually suspect someone of actually getting into her head.) Let’s not forget about Maya Miller’s too oft-underpraised harmonies, only more evident than ever on IWFWIL, as her voice is one of the key overlooked elements to what has given The Pack a.d. their inimitable sound throughout their entire canon of song… that, and the tambourines (and sometimes shakers… drummers get no respect.) We have another achingly disarming closing waltz, the chillingly delicate ‘The Gap’, which hears the band sounding startlingly… unplugged.

It is difficult to call ‘It was fun while it lasted’ The Pack a.d.’s best album, as Becky & Maya have brought their absolute best to each and every unique title in their catalogue, but it’s true… they may have actually saved their best for last and it is hard to imagine a more succinct denouement as this (I am proud to say that IWFWIL is the single best album I have ever had the anxiety to review.)

Fear not!—THE PACK A.D. ARE NOT BREAKING UP.I would even go so far as to reckon that Becky and Maya are closer than ever.Rest assured, with a recording career simply put into carbon-freeze, The Pack a.d. are very much alive… and in perfect hibernation.This writer can even attest to, first-hand and with absolute certainty, that The Pack a.d. have unequivocally had an indelibly positive influence on future generations of musicians (as I have personally looked square in the eyes of some of the kids these days that are now picking up a guitar or getting behind the drums and learning how to play them as a direct result of having Becky & Maya as contemporary role models.) The Pack a.d. may feel left over but their team will always be played oh so loudly in MMXX and beyond!

Only time will tell, but if this indefinite bookend truly represents the final chapter in The Pack a.d.’s library, then it was indeed fun while it lasted… and we will always feel like a new beginning was waiting just around the corner (with our ears forever anticipating to be rehaunted by the sound of Becky & Maya’s ghostly footsteps returning to the studio.)