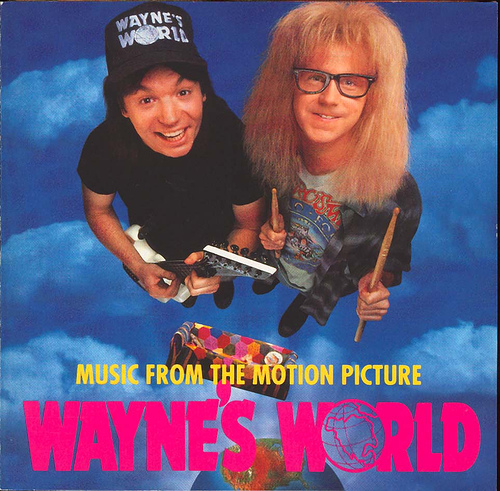 The year was 1992, and I was a fresh-faced 11 year old just starting to get into music.

My first foray into music ownership was the purchase of the Wayne’s World soundtrack. I bought it with an HMV fist certificate I got for my birthday.

That birthday I was given a CD player from my parents.

So for the next month or so, I listened to a barrage of Queen’s Bohemian Rhapsody and Sweet’s Ballroom Blitz. My life was changed.

I remember having a conversation with some older members of my family, and telling them how cool all these songs were.

They all reacted with similar responses, something along the lines of – “You know that music is from before you were born, I used to have that on vinyl”.

After I had them explain to me what vinyl was, I was intrigued. I suddenly wanted to find some and see what it sounded like.

Now that I was a man with my own music collection, of one CD, I wanted to see if it was really better than previous technologies.

I started keeping an eye out at garage sales.

After a few weeks I remember I walked into a garage sale with my dad, and there was a box of vinyl sitting on a table.

I went over, I picked it up, and I went over and bought the whole thing for the $2 sticker price.

Over the next few weeks, my dad helped my dig out his old record player and I listened to every record over and over.

From Led Zeppelin to Aerosmith to The Beatles, I found all this glorious music. It was an amazing moment in my life.

I became obsessed with The Beatles in particular.

One day my grandma came over to the house and heard my listening to the White Album in my room.

She came in and we talked about the band for a few hours. She told me how she loved them when she was a young woman. It was one of those memorable moments in life that sticks with you.

Listening to her talk about the band, made me feel like my love for the band was some how justified.

In our chat she told me how much she loved Paul McCartney in particular.

I knew that Christmas was only a few months away so I thought I would gift her the White Album.

Then I talked to my dad, and he told me my grandma didn`t have a record player.

So I never ended up giving it to her.

Years later I was reminiscing and I recalled how excited I was to gift her this album.

The thing is now my grandma only listens to stuff on CD. I went only and decided I would find her a McCartney album and send it to her for Christmas.

In the end of all my searching I ordered her The Art Of McCartney CD and she loved it!

In retrospect I thought about how everything had kind of come full circle.

With music I started with the CD medium, and then went to vinyl. Because of that I was able to learn about the history of music, and start from the ground up.

For my grandma, she started with vinyl and then later in life she was able to use CDs as a way of holding on to great musical memories.

I love music, and I love my grandma.

Without both I would be a far different person.