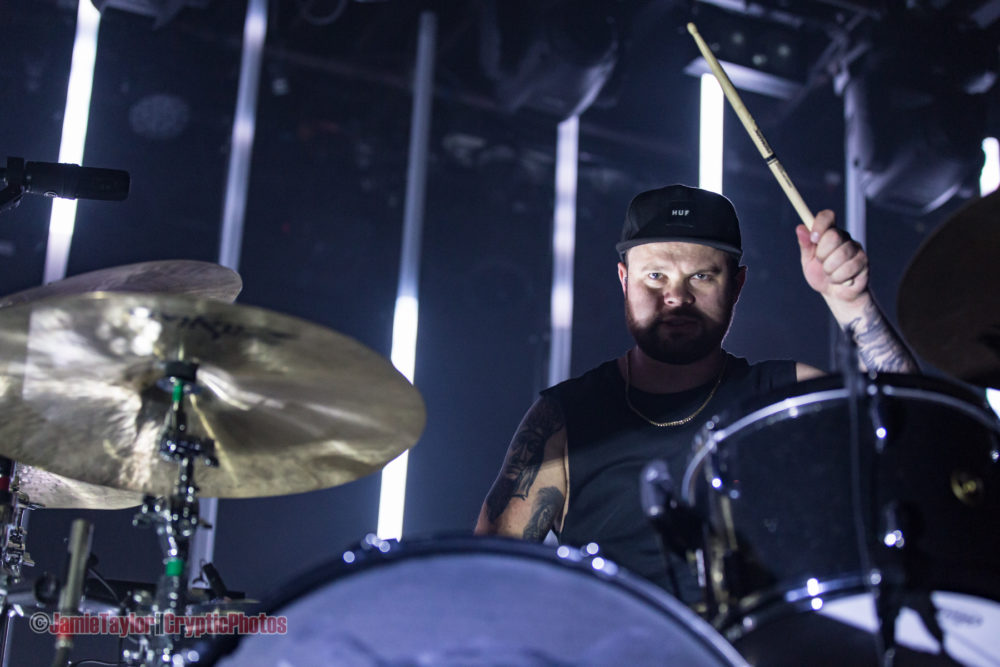 A Chat with Ben Thatcher of Royal Blood

English rock duo Royal Blood have been tearing things up over the last 4 years with their personalized brand of explosive rock.

We originally spoke with both members back in 2015, which you can read here – A Chat With Mike + Ben of Royal Blood.

Since that original chat, the boys have dropped their sophomore album, 2017’s How Did We Get So Dark?. The ten-song compilation shows growth in their song writing over their debut eponymous release from 2014.

This time around we were able to steal a few minutes with Ben Thatcher, the man behind the drums.

CA: Your second album, How Did We Get So Dark?, has been out for two months now. How did it feel to get that second album out there?

BT: It was good. I mean…you know, we toured on an album of ten songs for three years. So, to have more songs that you can put into a set and even just having that time out of tour to be in the same place at one time to record…and again it is two different things, recording and performing. So, it was nice to just kind of stop that for a while and be a bit more creative and get some new songs put together.

CA: I think you guys started putting out some of the songs that were on the album maybe like a year before.

BT: I mean, we played the song “Hook, Line & Sinker”…was done quite early but recorded quite late, on the process of it. It’s funny because the songs that you may hear off the record like “How Did We Get So Dark?” and “Hook, Line & Sinker”, those big key songs I guess, were almost not going to go on the record.

BT: Yeah, they were like the two that we were like, “well, I reckon we are two songs out, shall we record those songs and see how we get on with them?”. So, yeah, it was a nice surprise to have there.

CA: It’s interesting how that can all come together. You just go and say, “oh let’s try this one”, and that ends up as the single and the title track of the album.

BT: Yeah, first song on the record. That’s it.

CA: I read that when it debuted, it was the number one album on the UK Albums Chart. That must have been a pretty good feeling.

BT: It was insane.

BT: I mean our first one, obviously went to number one, which was totally unexpected, and so in the back of your head you’re like, “okay, where is this one gonna go. What’s gonna happen here.” We got told, actually, that it was number one, as we’re walking up on the main stage at Glastonbury. Next to Brad Pit and Bradley Cooper and it’s a bit surreal.

CA: One of those moments you will remember forever, kind of thing?

CA: In comparing the two albums, what do you think the biggest change overall is?

CA: Very cool, so just natural growth. You guys have toured all over the planet. It seems that you guys almost never take a break. What are your favourite places to play? Either like cities, or venue, or festivals, or whatnot.

BT: Yeah, I mean, we just did Lollapalooza, which is a festival I really love playing. I always go, actually, even when I’m not playing. Because I think it’s just one of those weekend festivals where; one, you don’t have to camp anywhere, two, if the weather does get bad you have a shower and there’s great food there, and there is always a great line up, I find, or, we can go out on the lake whenever you want.

CA: You’re just right in the center of everything.

CA: That sounds beautiful. I watched recently that you guys did an interview there, with, I can’t remember who it was, and it looked like you guys were having a blast.

CA: That’s one of the few festivals around the world, like you said, that’s always a great lineup and it just looks like a good placement. Totally central.

BT: I mean, like Glastonbury is always great and Rock Werchter in Belgium is a festival that we’ve played like four times in the last three years, so it’s one of our favourites.

CA: You guys have done a couple of AMA’s (Ask Me Anything’s) over on Reddit. Where you guys answer some questions and stuff. I know you did one recently.

BT: [laughter] Yeah! How did it go down? I don’t really remember, was it alright?

CA: Yeah, I mean I just kind of picked up the bones afterwards and tried to pick up some information. In the process of that, I found that there is actually a subreddit dedicated to you guys. Which is just all about you guys.

CA: So, we popped in their to just ask them some questions to pass along to you.

CA: First one off the top, which drummers do you look up to and draw inspiration from?

BT: John Theodore [of Queens Of The Stone Age], Chad Smith, John Bonham, and I would even go to things like, even though I’m not too into the music, but like Travis Barker and people like that who have…for me growing up, they were just there and they were really good and on top of the game.

CA: Travis Barker is a beast, none of those guys are shabby at all. [laughter]

CA: Do you work on your beard every day? Or, do you just trim it whenever it gets too shaggy?

CA: So, the opposite of what I do? [Interviewer caresses his large unruly beard]

BT: Yeah, exactly. I did…I did grow it quite big at one stage and I didn’t think it was too shaggy, but then I went short.

CA: It feels nicer when it’s trimmed down.

CA: I’m just too lazy. This is just laziness. [Interviewer yanks on his own beard] [laughter]

CA: What was the first album you remember buying?

BT: The first one I remember buying myself was Aqua – Aquarium, if you remember the song “Barbie Girl”?

BT: Yeah, I was a pop kid. I have three older sisters growing up and an older brother who…he was into better music but…I’m not saying that Aqua isn’t good actually because I loved it at the time. Yeah, Europop.

CA: It was on the radio all the time, so it’s dear to me heart. [laughter]

CA: So, last couple of questions here, these are about your favourite music, what lesser-known or maybe under-the-radar artist do you think more people should be checking out? It doesn’t have to be music, could be anything.

CA: Or anybody you’re just listening to or into.

BT: I’m so schizophrenic with what I listen to. I listen to a lot of old stuff that I never heard before, and also…but, what am I listening to? The new Arcade Fire album I’m enjoying at the moment.

BT: The Killers new stuff is quite good.

CA: It seems like it’s gone back to their old sound quite a bit.

BT: Yeah, It’s a little bit…everything’s going a bit disco at the moment, we’re finding. Which is cool but I…The Lemon Twigs are newish kind of band that are very entertaining to watch and very musical in what they do.

CA: That’s perfect. Last question, what artist is your guilty pleasure? Maybe an artist that you love to listen to, turn it up when you’re by yourself but maybe don’t really want anybody else to know.

BT: Again, I don’t have any guilty pleasures. I just said Aqua to you. I mean, I love everything. I love really horrible 90s pop music.

CA: Spice Girls, they were on the radio.

BT: I love the Spice Girls, I love Disney songs, everything.

CA: I have two little girls and Disney songs are a plethora across my world. Well, that is all I have for you.

BT: Amazing. Thank you, very much.

CA: Thank you, very much.

Thank you to Ben for his time.

Hopefully, we can catch up with Royal Blood again when they open for Guns N Roses in Vancouver in about 2 weeks.