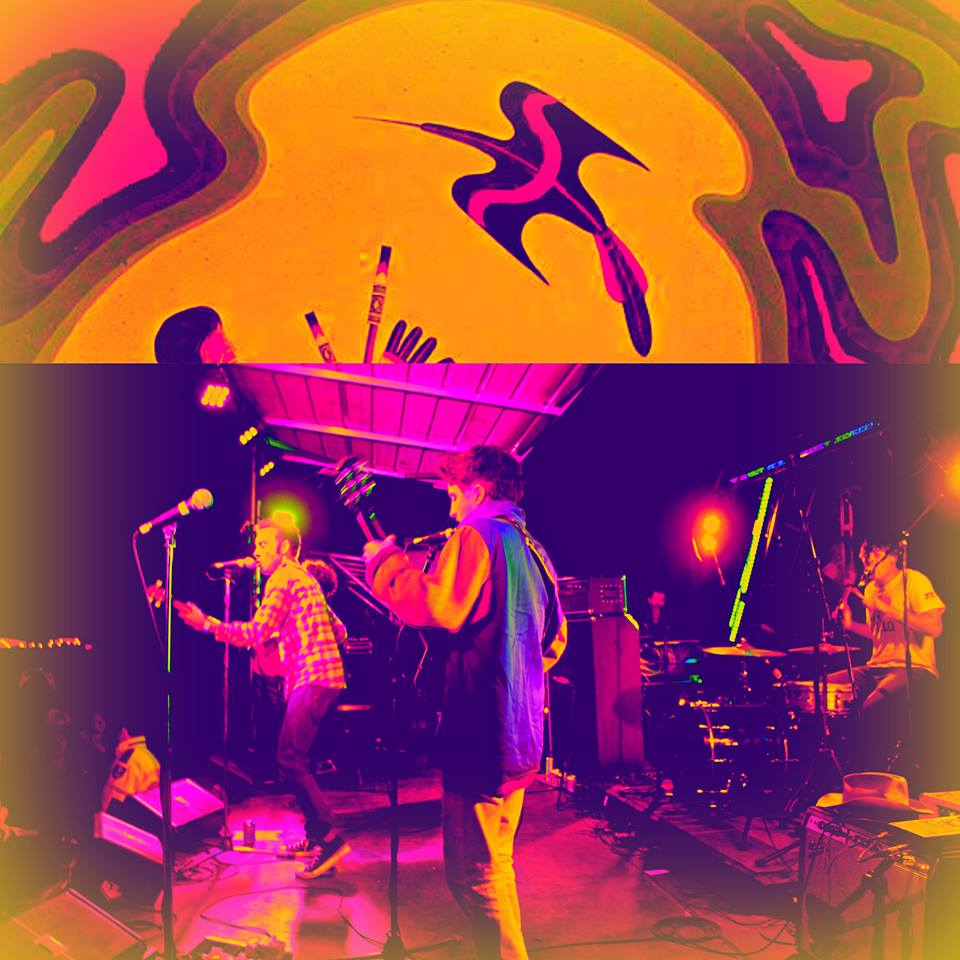 An  interview with Cole Alexander of  Black Lips to talk about punk and pop influences, the Confederate flag controversy and how to eat sea urchins.

David Lacroix:  Why do the names of Black Lips albums feature so much natural imagery?

Cole Alexander: i guess we were always trying to be into punk rock with more of a hippy vibe. It’s subtle but there, probably. Like a softer, psychedelic punk type thing.  We are a punk rock band but we’re not like Ghhh-ghhh-ghhh, trying to blow people’s ears away or anything, it’s more 60’s style.

DL: You and your bandmates have been self described as Flower Punks.  Are there any artists you would share that label with?

Cole: I’ve heard other bands ascribe it to themselves, like King Khan, like he’s done that with the Shrines. There are definitely other bands out there but i’m drawing a bit of a blank.

DL:  Who are some of the punk artists who have influenced you the most?

Cole: We definitely always went to the roots of punk, we were always trying to find 60’s band. There’s this band called the Swamprats from Pittsburg and a band called Los Psychos from Peru. A lot of those bands didn’t have a lot of output but the little output that they had, we were super into it. They were 60’s bands doing punk rock. The roots always sound more pure or rudimentary.

DL: The Black Lip’s last couple of records have included many catchy pop songs. What artists most influenced you in terms of pop elements?

Cole: I like David Bowie and Iggy Pop, they’ve had some success in the mainstream world working in studios and not just recording in the garage.  I liked, basically the most fucked up [artists] like Nirvana and the Butt-hole Surfers, they were able to touch the mainstream a little bit but still be fucked up and weird.

DL: Describe your experience at Levitation Vancouver. Were there any artists that grabbed your attention?

Cole: I saw Mystic Braves, they are my friends from Los Angeles. They were really good. Black Mountain was good. And then I saw Dead Moon, who are my heroes so I had to see them. They are my favourite of all, of everything.

DL: The West Coast has a lot of amazing seafood. What’s the weirdest thing you’ve eaten out of the ocean?

Cole: I’ve eaten whale, once when I was in Norway. I’m actually a big fan of seafood, Sea Urchin is actually one of my favourite foods. Raw oysters are one of my favourite foods. As far as weird food from the ocean….[thinking]  oh  that wasn’t from the ocean… in Japan I ate this sashimi from horse neck. It wasn’t a sea creature really, although a horse will get in the water….

DL: I hear Sea Urchins are a lot of work for the payoff.

Cole: I’ve seen a guy clean one out. A lot of the times, they’ve already been processed for the sushi restaurants but i’ve seen a guy take one out by himself. It took him about 15 minutes to get all the crap out. One time i was in Greece and I saw all these kids on the rocks just smashing them on the rocks and  just sucking them out but i think you get a lot of bitter stuff too if you do it like that.  It’s a quicker way but you might get some crappy bitterness.

DL: Your last record, Underneath the Rainbow, continues a focus on pop sensibilities and cleaner production started on Arabia Mountain. Would you consider returning to work with producer Mark Ronson?

Cole: Yeah we wanted to work with him on the last record [Underneath the Rainbow] cause we were happy with the way [Arabia Mountain] worked out but he’s pretty busy, he does all this mainstream stuff so it didn’t really work out working with him again. I might take it back in a more raw direction a little bit but we’ve learned things working with producers about making things danceable. With Mark, we turned the drums up a little cause a lot of the time people wouldn’t dance to our music in a club. There are things I’ve learned from him that will be useful when I go back to the lo-fi thing, just incorporate some small pop elements but still keep it raw. We would work with Mark Ronson again, we work with a producer when it’s right.

DL: The Black Lips have done some killer covers. How important are cover songs for bands?

Cole: A lot of times its good cause maybe people aren’t familiar with their sound. A lot of the covers we’ve done aren’t very familiar but then they become familiar with it. That’s good.

DL: In recent years, there has been a bloom of specialized psychedelic music festivals such as Levitation, Austin Psych Fest and Levitation Vancouver. What’s your impression of those festivals?

Cole: They are awesome, I love them. I just get to hang out with my friends, it’s perfect, it’s relaxed.  Those are some of the better festivals i’ve seen.

DL: What are some of your favourite music festivals?
Cole: I like Primavera Sound Festival in Barcellona, Spain.  Also I like Psych Fest and Burger Fest.

DL: Growing up in Atlanta, Georgia, were you ever aware of any Canadian musicians?
Cole:  Growing up, I didn’t really pay attention to music until I was older. There was probably stuff i heard from Canada without realizing it. I didn’t really think about where stuff was from. But when i got older i got into the roots of punk bands like Simply Saucer, and there was this band called Figures of Light that were early 70’s Canadian proto-punk. The Painted Ship from Vancouver I really like. I just got into Canadian Country like  Stompin’ Tom Connor.

DL: What was it like to play in Quebec?  Did you see the Rolling Stones play outside Quebec City?

Cole: We played a big festival but were weren’t playing the same day as them. Quebec Blues festival or something but hardly any of the bands weren’t really blues. I give you that the Stones have a lot of R&B influences, I saw them in Atlanta when they played.

DL: The Quebecois have a huge cultural influence upon the rest of Canada. Do you notice a difference playing in Quebec versus other parts of the country?

Cole: I kind of like their vibe, it seems cool. Montreal is one of my favourite places to play, it feels like i’m home but it’s more exotic or something. We do really well in France, I like that influence. Toronto is cool too but we pretty much just play there and Vancouver and Montreal. We have played other places.

DL: Coming from Georgia, what do you think of the recent controversy over the Confederate flag?

Cole:  Personally, if someone has a confederate flag, I don’t give a fuck. People can do what they want. I don’t think it should be on the court house or the state monuments. I had relatives in the Confederacy and they died. They lost, losers don’t get to have their say. In spite, they would try to keep onto their state rights and put up the Rebel flag up to taunt people.  I don’t think it has any business being on any institution that tax payers are funding at all.  When i was growing up, I’d see bikers and black kids wearing rebel flags ironically. People just didn’t give a fuck. It’s kind of a symbol of rebellion. You could see it as a symbol of pure racism, that’s what it’s kind of taken on but I don’t think that’s what it always meant to people who wore that symbol. To me its a sign of rebellion; the confederates did their bad things but with the United States, all of our founding fathers had slaves and we’ve done horrible things across the world, nobodies getting on that. People are making it a battle but there are more important battles to be had. I see bikers with the flag, some people say all bikers are racist too but I don’t care, it doesn’t bother me on a personal level. We lost the war, we aren’t in power, why is that flag on the courthouse?

DL: Do you have any song compositions off the last few records that you are particularly proud of?

Cole: “Noc-a-Homa” and “Do the Vibrate.” Overall i was really proud of Arabia Mountain.

DL: What’s the importance of pop music nowadays? How important is pop music for you compared to punk rock?

Cole:  I always liked elements of pop but i hate most pop, like 90% of it is crap. Every once in a while something okay comes along, like Gnarles Barkley, Amy Winehouse or Dangermouse but for the most part i hate pop. If it has some element that is raw or weird about it, i liked a lot of the 90’s trip hop. I liked Portishead growing up. I don’t like pop but I like it’s elements, danceability and catchiness.

DL: What’s it like as an artist in modern times with labels and self-promotion? What advice would you give to up and coming musicians?

Cole: Yeah I would say promote yourself well. A lot of bands I see are really good but they don’t promote themselves so nobody cares. There’s some bands who only care about promoting themselves and not about the music, it’s a fine line. Just try to do it yourself in the beginning. Record yourself, put it out yourself, put on your own shows. Market yourself well and everything will fall into place but I wouldn’t rely on too many people in the beginning. Some bands are like “we gotta get a record deal now and management.” I would just start out by yourself in the beginning. Once you get a buzz it will all fall into place.