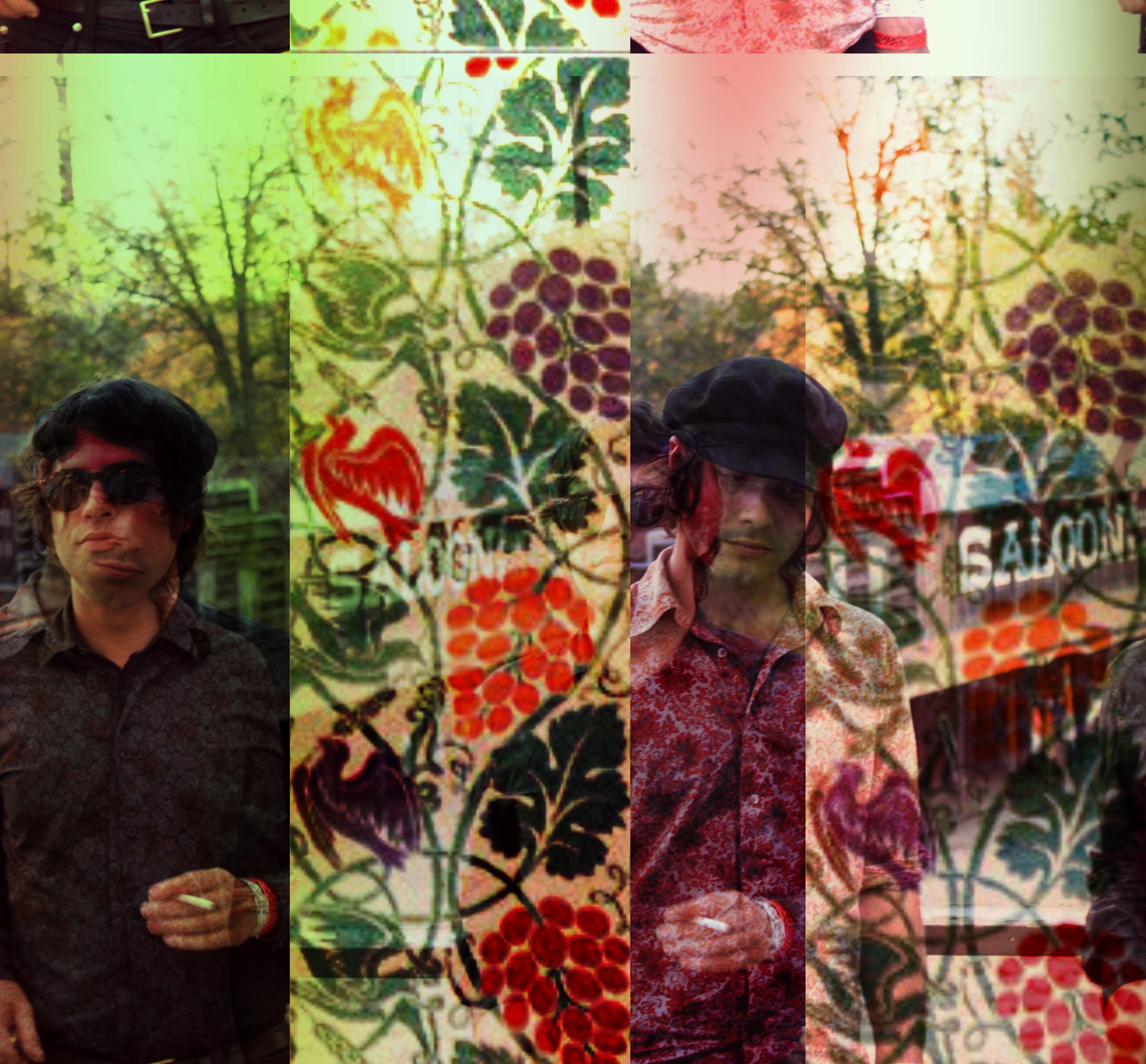 Last fall at Vertigofest, A Love That’s Sound met up with San Francisco psych rockers the Cellar Doors. Bristling with energy and vivid, vicious reverberations, guitar tones. Far from mellow, the Cellar Doors pack a solid psychedelic punch. Drawing from ’70s punk and late ’80s era psych, the band stands out its intense volumes and driving intensity. Listening to the Cellar Doors is like falling into a clear, cold river – goddamn refreshing.

David Lacroix: Tell us a little bit about how the Cellar Doors got started.

Sean Fitzsimmons: Well, we have known each other for about 15 years, so since high-school with Jason, who plays bass and is not here right now. We started playing together in a shitty band in high-school. We kind of went off and did separate things, we started playing together again, started playing with Jason and it started to click really quickly. I think it was only six months, were living in southern California at the time, we had a few songs, we decided to take it seriously and move to San Francisco.

DL: What is it like being in a psych band in San Fransisco? Does that city have more pressure given its colourful past in psychedelic music?

Sean Fitzsimmons: Yeah, there’s a lot of history to it. The thing is that the psych label, so much can be under that umbrella these days. It can be debatable at the same time. I just found a lot of …. the city was like a muse to me, moving there. That’s kind of what we were, in Southern California, in San Diego, we all grew up there and just wanted to go somewhere new and get some inspiration. That city, it’s definitely changed over the years but there’s something about it, definitely. It affects our sound.

DL: Who are some artists who have inspired the musical tone of the Cellar Doors?

Sean Fitzsimmons: There’s a lot. The Velvet Underground is still a very focal point for me. I branch off from that but there’s so much. Our sound goes from the ‘60s to stuff like the Stone Roses. When we initially started playing it was a little bit too polar opposite, we needed some middle ground to bring it together. I think over the years we’ve kind of found a way to do that. It’s always just jumping around, it is mood based, the inspiration. It’s not really tied to any decade or specific sound in particular. It’s trying to blend, in some way.

Mickey Rogulj: We got really into the same kind of music too. Great bands like Television and Personalities, something I’ve been listening to since I was a kid. When I showed it to Sean and Jason, it was like “fuck, this is awesome, what is this?”

Mickey Rogulj: I like it, its really easy to navigate the songs and structures. It comes together very quickly.

DL: Mickey, How did you get into playing with the group Seventeen Evergreen?

Mickey Rogulj: I’ve known Caleb [Pate] for not that long, but I ran into him at a bar, the Make-out Room in San Francisco. He was like “hey,  we are doing this festival and we are thinking about doing something with a live drummer again. You came to mind.” So I went to a couple of rehearsals, it felt weird, it’s the first time I’ve played in another band in a long time that wasn’t with the Cellar Doors. It was really fun.

DL: Mickey, Who are some of your favourite drummers in terms of style? You were very energetic on  the cymbals and high-hat during last night’s set.

Mickey Rogulj: That’s such a loaded question for me because there are so many little pieces of artists that I feel influence me. Lately, Billy Ficca from the band Television, speaking of cymbals and high-hats. He was a jazz drummer, and then he came into that band. I never played jazz, I started playing Ramones songs when I was 10 years old. Getting into the intricacies of what he plays on everything really influenced a lot of basic little things here and there. My philosophy is “play simple, add stuff here and there to kind of make it interesting.” But shit man, Ringo Starr is pretty amazing, Charlie Watts. Stylistically, Keith Moon is amazing. It’s little bits here and there from a lot of different drummers.

DL: The Cellar Doors have a very energetic onstage presence; there’s a real casualnesses with hints of humour. Is that intentional?

Sean Fitzsimmons: Yeah, maybe sometimes. I think that we are just real comfortable playing together, there’s just a natural sense to it. The live performance is something that has to have some energy.

Mickey Rogulj: I think its a reflection as us as friends. It’s kind of the same way that we hang out.

Sean Fitzsimmons: We used to be a little bit more stiff, years ago. We used to just be standing there, playing. And now it’s just….

Mickey Rogulj: I don’t remember that.

Sean Fitzsimmons: Well, you were sitting down… playing drums…

Mickey Rogulj: Yeah, well I do sit down.

DL: Do you think that music should be serious?

Sean Fitzsimmons: Nothing should be taken seriously.

Mickey Rogulj: To  a certain degree, I guess.

Sean Fitzsimmons: We take it seriously.

Mickey Rogulj: Nah, it’s a big joke to us. [Laughs]. Everything should be fun, if you are passionate about something. A lot of people refer to being in a band as a job. In a lot of ways it is, but when I’m at a job I don’t usually think, “ah fuck, I love this sooooo much.”

Sean Fitzsimmons: Just that we have the ability to do this, it’s amazing. We are having a great time playing and creating music. Yeah!

DL:  What are your recording plans?

Sean Fitzsimmons: We have a single out, two songs, “Frost” and “Prism.” It’s the first record for us so it’s really cool. We got the test pressing and just back home and put it on. It was just amazing. We released an EP a few years ago, we wanted to put it out on vinyl but didn’t have the funds to do it. It’s really exciting we are about to finish our full length.

Mickey Rogulj: We are working with an amazing producers, Jeremy Black. He has really really opened up our sound, the way that we look at our songs. He’s crafted something pretty special that we would have never thought to do.

Sean Fitzsimmons: He brings in elements that have really expanded the sound in a really cool way. We’ve worked with people before, on that EP, we recorded that at my father’s studio and mixed it ourselves. Before that, we’d have people offering to mix, and we’d get something back and be like “ehhhh.” I was so fixated; we knew what we wanted to do so we just did it ourselves. It was a little bit of butting heads with people. I appreciate that they wanted to work with us, but with Jeremy there was none of that. Initially, he would just go off on his thing with it; there was a bit where we had to tie him back in, “this is kind of what we wanted to do as well.” It’s an awesome relationship.

Mickey Rogulj: Yeah he listens to us and we listen to him. it’s a relationship of mutual respect. We got introduced to him by our manager Fred Barnes who has been nothing short of an incredible guy. Pretty fuckin’ amazing.

DL:  Any comment on the current climate of alternative and psychedelic music on the west coast?

Sean Fitzsimmons: There’s a lot of great music happening right now.
Mickey Rogulj: The Electric Magpie are great. One of my favourite San Francisco bands is Pow. They are a really unique synth punk thing. They do it so well. There’s a lot of great music out there. Festivals like Vertigofest, Desert Stars Festival and Austin Psych Fest are bringing all of these like-minded people together. The music isn’t necessarily the same over all but it’s a mutual understanding.
Sean Fitzsimmons: It’s all good music. So many of our friends have been playing it’s a lot of fun.

DL: Have you toured the east coast?

Sean Fitzsimmons: The last time we did a proper tour was a few years ago. We’ve been waiting to put out a release to do that. That’s kind of what held us back. Now we are finally getting something out and are just excited to hit the road.

Mickey Rogulj: Speaking of overseas bands, Toy. That band has blown my mind. They are incredible guys, every time I am in London, they are incredible hosts. Toy is really special. They played the Acid tests. Pretty amazing….

Sean Fitzsimmons: Yeah, they put on a great party. It’s cool, the acid test has brought a lot of people from LA up to San Francisco. And so it’s been blending a little bit more than I think it was for a bit. San Fransisco itself has changed a lot. A lot of people have moved and this and that. But it’s cool getting to know so many of these amazing musicians and friends from LA who are doing all of these incredible things. We are always doing different stuff but we can all appreciate what it is.

Preorder the Cellar Doors‘ single “Frost/Prism” at cellardoors.bandcamp.com. A full length record is in the works.

Special thanks to the Cellar Doors, Desert Stars Festival and Vertigofest.