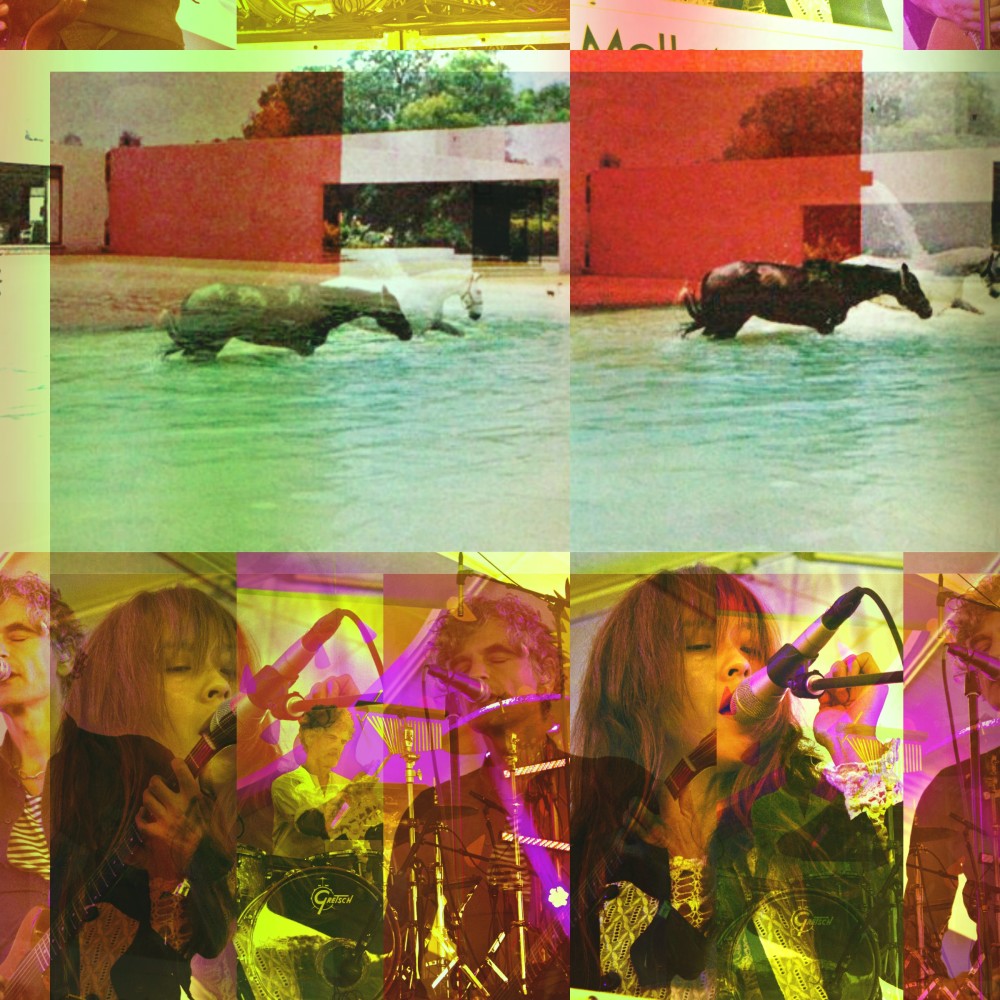 Make Art Timeless. An Interview with Kazu Makino & Simone Pace of Blonde Redhead. Formed in New York City in 1993, Blonde Redhead are an enduring Art-rock trio whose style has ranged from punk rock, pop and minimalism.

DL: On your latest record, Barragán, there is a decided minimalist approach. What influenced you to take the record in that direction?

Kazu Makino: I think that’s mostly what our producer, Drew Brown, had a natural tendency towards and we embraced that I suppose. Our tendency is to layer, many many layers. So it was a good exercise for us.

DL: Do you consider Barragán to be more layered or complicated than your previous albums?

Kazu Makino: Complicated in a way that it wasn’t very simple at the beginning. We made it simple but the process of making it minimal was a quite complicated process.

DL: You have mentioned the importance of Adrien Butcher, Blonde Redhead’s manager, in the making of the last record.

Kazu Makino: Yeah, she made it happen. She got the deal. She really helped us keep it together, we couldn’t complete it without her. She had a major impact on it.

DL:  One of your songs on the new album, “Defeatist Anthem (Harry And I),” alludes to to the 23 era b-side  “We Are A Real Team (Harry & I).” What is the connection between those songs?

Kazu Makino:  It’s just that both of them are about him. That’s why I ended up having the same title but it’s about a continuing relationship I have with Harry.

DL: And who is Harry?

DL: Speaking of horses, wasn’t Misery is A Butterfly recorded after you had an equestrian injury?

Kazu Makino: We were actually working on the album and then I had an accident so we had to pause it. As I was bed ridden, we realized that we actually weren’t ready, cause we were about to go in and record it. After the accident, we realized that the music wasn’t ready to be recorded so we went much, much further in, so that was kind of a blessing in disguise, I suppose. We might have had a really bad record. (laughs)

DL: What was the biggest change on that album? Were there any particular songs that were totally reworked at the last minute?

Kazu Makino: Actually, all of them went much further than before but I think “Misery” in particular, it changed quite a bit. And “Doll Is Mine” became a lot more harmonically profound.

DL: What’s the climate like in the artist/bohemian art scene in New York? Has it changed very much since you started releasing music?

DL:, blonde Redhead have made significant shifts between records but there are some stylistic and tonal similarities between records, for example A Melody of Certain Damaged Lemons and Barragán. Is that an intentional choice or more of a coincidence?

Simone Pace: Barragán Fits. The record was made in such a nature way in regards to the equipment we chose. Everything was analogue, everything was very old that we used. We were trying to do a timeless record and maybe that’s why the older songs play well with it. We’ve been playing older songs because it’s a nice transition from then to now.

DL:  Is the album named in reference to Luis Barragán, the celebrated minimalist architect?

Kazu Makino: I happened to visit his house, the house where we lived and died during the time we were just about to complete the album. It made a huge impression on me. I’m not actually saying that our music is the same line, that would be very obnoxious of me, but i love his name. I loved the way his name sounded. To me, it sounded very authoritative and powerful. I wanted something like that, almost like a brand.

DL: Do you consider Blonde Redhead to be an experimental or psychedelic band in anyway ?

Kazu Makino: No, but the fact that we’ve been playing for so many years, being is such different situations, i think we can be very pliable in that way. We did the desert festival and there was actually a sandstorm. We played in a sandstorm! we had scarves everywhere except for our eyes. Our music was so fresh, it was new material, it sounded like we were improvising and I think that people really loved that. I think we are quite pliable, flexible and adjustable in some ways.

Kazu Makino: your question before “are you revisiting the old”? It’s more like that’s what happens, our reaction to new material happens quite immediately from what we’ve been doing. It’s not that we are thinking about 10 years ago, we get quite burnt out from doing something and we want to do the very opposite of what we have been doing. With Bargain the way we do it, it is so natural that it is hard to get burnt out.

DL: Do you have any works in progress at the moment? Do you any new, set ideas or demos?

Kazu Makino: Not quite yet.

Simone Pace: We have a remix album that will be coming out.

Kazu Makino: I think it will be coming out this winter. it’s really good because many of our friends worked on songs from Barragán and they gave such a new light to it, some people at least, that we almost want to learn the songs that way. That’s been really, really absorbing.

DL: Are there any particular contemporary artists who have impressed you?

Kazu Makino: He’s not new but Connan Mockasin did one of our remixes and it was really impressive. Same with Chris Bear, the drummer for Grizzly Bear, he did a remix.

Kazu Makino: Deerhoof is unbelievable! Greg Saunier, I just jumped into him in Berlin. He was orchestrating a chamber group to play one of the Deerhoof songs but it sounded completely minimal and classical. It was beautiful. When I saw that, I really hoped that we would have an opportunity to work together and then he did a song for our remix album. Anything he would do, I would be so curious to see.

DL: How about music from Canada?

Kazu Makino: Suuns! Do you know them?

Kazu Makino: I love them. We asked them to do the remixes but we didn’t like it as much as Suuns‘ music. They weren’t really able to express who they are through our songs. I wanted to push them but we didn’t have time, but I really love their music.