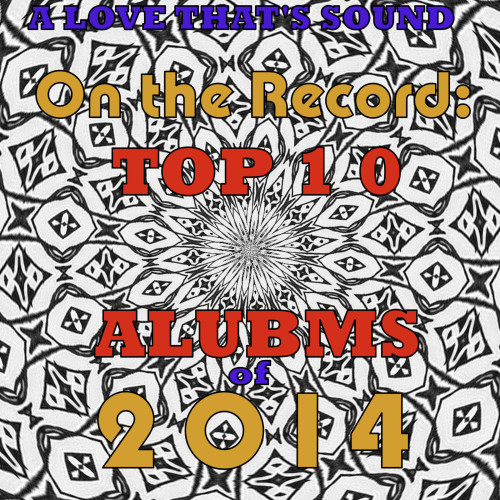 As the 2014 calender draws to a close, A Love That’s Sound would like to share 10 of its favourite ambitious, imaginative and well executed musical albums expressed during the last year. Here, without further adieu, in alphabetical order, are ALTS’ 10 Top Albums of 2014:

#2. the Black Lips – Underneath the Rainbow

The Black Lips’ last record Arabia Mountain consisted of a sometimes disjointed set of cheeky, catchy as hell garage songs. Never sounding overproduced, the Black Lip’s more professional studio work has buttressed their sensible arrangements without deflating their flower punk outlook. The Black Lips hit bull’s eyes with infectious rolling pop bullets like “Smiling” and “Dog Years” while showing deepening complexions on the ponderous rockers “Justice After All” and “Boys in the Woods.”

Four years following the glittering sprawl of Penny Sparkle, Blonde Redhead resurrect many techniques used on past albums on Barragáin. Dusting off old techniques from a Melody of Certain Damaged Lemons era recoridngs, Blonde Redhead offer one of the most sparse, calculated and intriguing records major label releases ever cut to wax. Subtle synthesized sonic textures, plucked guitar and Kazu Mako’s sweet, squeaky fragile voice culminate a particularly fine set of minimalist art rock. Released only due to the persistent encouragement of their band manager, Blonde Redhead forged forward with one more record just as they were ready to call it quits. Dreamy, innovative and concise, Barragáin is a fitting hallmark of Blonde Redhead’s spectacular career.

The strongest Brian Jonestown collection since Bravery, Repetition and Noise, bandleader Anton Newcombe and his Berlin based colleagues’ provide a variety of succulent cuts that often match or improve upon BJM’s best work. “What You Isn’t” dangles a melodic hook over a figure-eight progression with hypnotic effect. More developed song crafting makes this record an improved cousin of 2011’s overtly cinematic Aufheben. Revelations is an agreeable execution of a vast spectrum of BJM experiments without skimping out on quality song writing. The Brian Jonestown Massacre may have made better records in the past but Revelations is a playful, ambitious statement and a stirring return to form.

A spastic collection of massive orchestrated chaos, And Star Power runs through bizarre combinations of highly blown psychedelia. Like a stormy sky opening up for an occasional break of sun, And Star Power is a tumultuous collection of meandering music, often shifting suddenly from bombastic arrangements to quiet, soulful moments of vulnerability. Energetically embodying a psychedelic mindset, Foxygen are full of sassy tricks and homage to classic elements of soul. Singer Sam France is ambitious, both with a large dynamic vocal range and a willingness to experiment. Dramatic, sombre Jim Morrison-inspired vocals on “Cosmic Vibrations” rise to sweet falsetto with fantastic lines like “if you want me / you can have me but I’m all used up.” Ever challenging but oh-so-catchy, And Star Power is full of nourishment that can only be appreciated upon repeated listens.

Newcomers hailing from Kettering England, Temples embody a neo-psychedelic style in a stream of colourful, well constructed songs. Sun Structures finds an enticing balance of textured keyboards, clever song craft and saturation of psychedelic clichés. Bright, chiming guitar melodies are paired with sharp, snappy drums, pondering bass and Moody Blues inspired vocal harmonies. Combining the sonic brightness of Tame Impala and the baroque pop sensibilities of The Zombies, Temples’ have cut their teeth with an unusually impressive album debut; look no further than ‘Shelter Song” or “Colours in the Dark.”

Dripping with lush atmosphere, The War on Drugs’ most recent Lost in the Dream matches and exceeds the feeling and arrangements of their previous efforts. Gently sloped melodies float atop, snappy beats on clear, extended arrangements like “Under the Pressure” and “An Ocean in Between the Waves.” Comprising of over an hour of music, Lost in the Dream’s warm textures and river-like flow are notable in their slow burning crests; gradual sonic landscapes and cohesive, inspired atmospheres culminate into a drifting standout, a memorable modern classic.

A 2014 Record Store Day original release, Austin Texas based neo-psychedelic masterminds the Black Angels supply a return to form. Clear Lake Forest, a seven song collection that not only recaptures the haunting charm of analogue recording absent on Indigo Meadow but also shows the band at their most abstract. The Black Angels break new ground, such as on the slow wonky burner “Linda’s Gone.” The Black Angels retain their signature, snappy song structures on “An Occurrence at 4507 South Third Street” and “the Flop.” Continuing their brazen output, the Black Angels continue to be masters of abstraction.