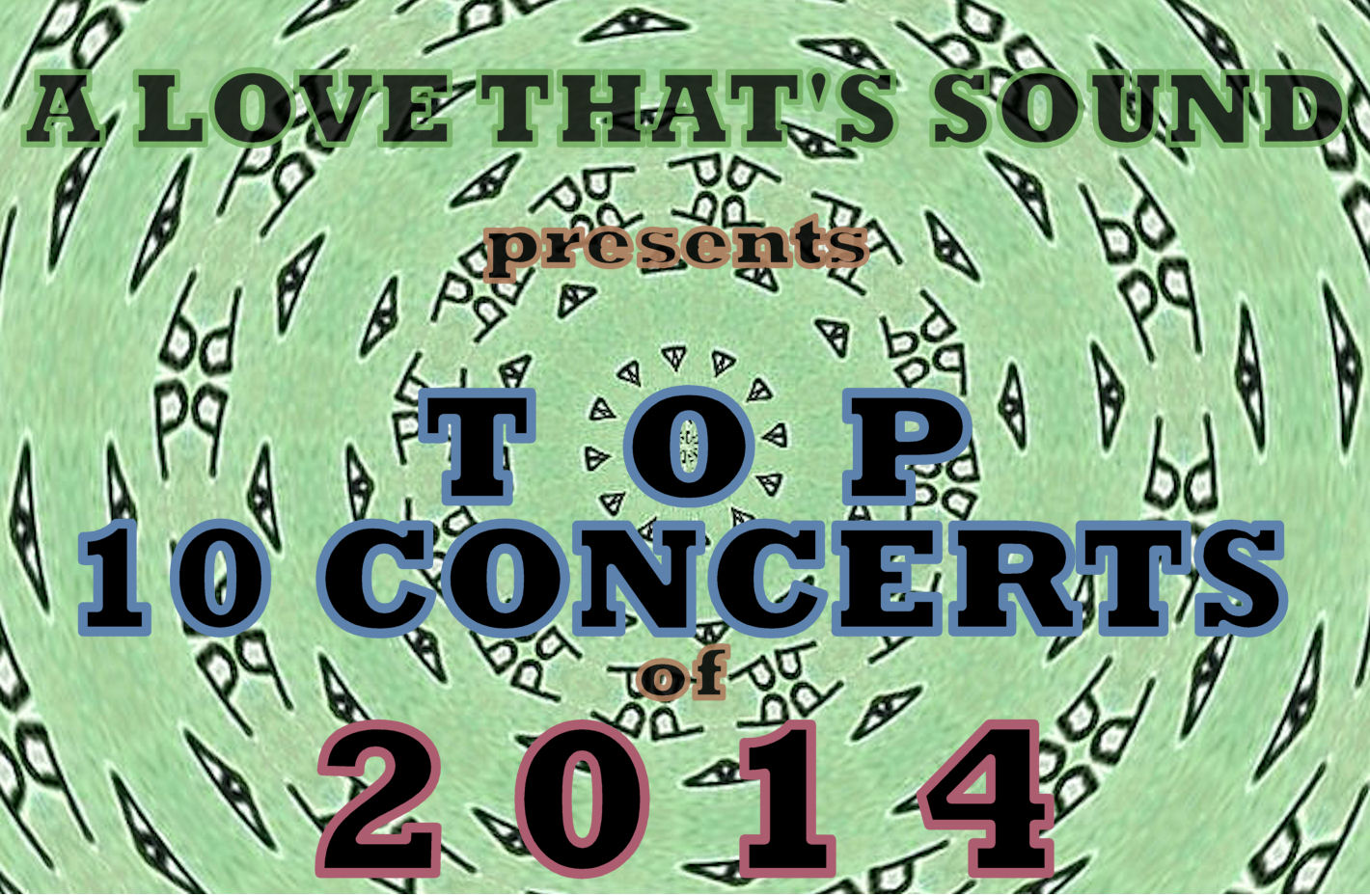 A Love That’s A Sound has 10 favourite and compelling concert experiences to share from 2014. While there were plenty of excellent performances in this past year, the following 10 are particularly noteworthy. Make sure not to miss these amazing musicians the next time they spin around town!

Kawabata Makoto’s Acid Mother’s Temple exemplify unfettered psychedelic adventure. Extending single compositions over the better part of an hour, Acid Mother’s Temples have been known to play “Pink Lady Lemonade” for the entirety of a set. On Vancouver’s last visit, Makoto shredded upon a black telecaster singed black by fire supported by AMT’s formidable rhythm section, not to mention the spacey-electronic tweaks of long-haired psych wizard Higashi Hiroshi. The culmination of the band’s musical effects ought to be the soundtrack to an musician’s whose ambitious thundering 30-minute pieces went well over the heads of most of the audience. Don’t expect the ordinary at an Acid Mother’s Temple show; those guys are out of this world and as psychedelic as they come.

A showcase for vivid, off kilter and perplexing acts, Austin, Texas is the perfect setting for a show case of psychedelic and alternative music. Beyond Austin’s unmatched zeal for producing world class music festivals, Psych Fest takes place on a ranch, complete with an amphitheatre next to the picturesque Colorado river. With onsite camping, delicious eats and shopping curated by hip local boutiques, record stores & renowned Austin food-trucks, Austin Psych Fest isn’t your everyday festival. Curated in part by neo-psych pioneers the Black Angels, Austin Psych Fest has changed the name of the upcoming 2015 festival to Levitation in order to distinguish itself from the increasingly frequent “psych fest” moniker used around the globe. Austin Psych Fest’s 2014 lineup included Loop, the War on Drugs, Acid Mothers Temples, the Brian Jonestown Massacre, the Pink Mountaintops, the Zombies, Elephant Stone, Night Beats, Fantasmes, Brownout and many, more mind-blowing artists from all around the world. With an intimate sized crowd, stunning scenery and top notch psychedelic artists of all varieties, Austin Psych Fest is almost too good to be true. With round trip airfare from Vancouver to Austin ringing in around $350, a quick sojourn down to Texas is comparable to the cost of a Sasquatch or Pemberton outing.

#3. the Black Lips @ the Rickshaw Theatre, Vancouver BC.

Cranking out raunchy rock cuts with a playful carelessness, the Black Lips make infectious pop songs look easy. Renowned as a crazy bunch of southern boys, the four piece have called themselves flower punks in an effort to describe their trippy, jangled version of cheeky surf rock. Rambunctious but always in time, the Black Lips ripped through plenty of prime material off Underneath the Rainbow as well as fan favourites like “Family Tree” & “Modern Art” from the most excellent Arabia Mountain. And yes, Cole Alexander spat a loogie 6 feet in the air before again catching it in his mouth onstage; they do that sort of thing.

Somehow, Blonde Redhead have managed to outdo themselves again. Recent releases 23 and Penny Sparkle perfectly embedded a vision of artistic, refined electro pop that exemplify a balance of artistic merit, groundbreaking studio work and top-notch songwriting. When performed, the songs of Barragán spring to life and illuminating many subtle sonic touches that warrant comparison to the work of Depeche Mode and Radiohead. Blonde Redhead may have flirted with the mainstream with the formidable formula of 23 but have instead choose to push the limits of minimalism within the constructs of a glittering, personal set of songs.

When brooding Australian poet Nick Cave walks out onto a stage, one could almost cut the excitement with a knife. Within two songs, can be seen Mr. Cave standing stoically within in the rows of the audience in a sea of adorning hands. Supported by the stellar talents of the Bad Seeds, led by bandleader Warren Ellis, the audience could be more enthusiastic as Nick Cave’s sweat trickled down his dark hair at the end of the second song. With a spacious, tenured, folk rock group like the Bad Seeds, Cave strides with an invincible confidence in his backing musicians. During the 2014 tour, the audience was treated to sombre supporting set courtesy of Mark Lanegan. Consisting of stripped down alternative blues numbers, Lanegan’s performance of familiar classics like “Mack the Knife,” or dust vocals on “St. Louis Eulogy” could hardly be more perfect.

A modest sized, indoor festival with big ambitious, Nootka Sound festival brought some of the most promising psychedelic acts to a single bill at the rickshaw theatre. The Allah-Lahs, together PANGEA and Jacco Gardner all performed high calibre garage or tempered psychedelia. Of most worthy mention however, was the Entrance Band, a fiery three piece with flirting, swirling blues jams that affect the listener’s mindset as much as their ears. Existing in an entirely different musical universe, the Entrance Band is a musical anomaly and is nothing short of mind-blowing

The electro-industrial duo of Nivek Ogre and cEvin Key played two packed performances at the Commodore Ballroom, each featuring heavy doses from their most excellent recent release Weapon. Master veterans of theatrical horror, Skinny Puppy have set the standard for gruesome shocking stage shows employing a range of tactics including simulating knife attacks, brandishing radioaotive looking liquids onstage and spitting blood. While certainly not a pretty sight, Skinny Puppy’s performance is well deserving of its reputation.

#9. Slint @ the Rickshaw Theatre, Vancouver BC.

Louisville Math rockers Slint played their opus landmark Spiderland in its entirety alongside other fan favourites like “Pat” and “Rhoda.” The stark blackness of a barely lit stage served to be a perfect environment for Slint’s minimalism on “Don Amon” as well as the magnificently savage epic “Good Morning Captain.” Few bands have written write work of comparable, desolate beauty and even fewer can perform music with such immaculate precision. Playing to the respectful pleasure of an ecstatic audience in disbelief of seeing one of the most classic minimalist bands ever recorded, Slint’s shadowy performance was applauded with reverence.

Stephen Malkmus & the Jicks @ the Rickshaw Theatre, Vancouver BC.

#10. Affection for Stephen Malkmus has most certainly swelled in recent years; Pavement fans may often be found occupying a majority of floor space at a Stephen Malkmus show. For those not familiar with his side work, there are 6 LPs chalk full of swirling guitar licks and bizarre lyrics that arguably surpass Pavement’s best work. What is most exciting about a Jicks show is the band’s particularly limber sense of humour and meandering choice of cuts. Choosing from a vast catalogue of formidable quality songs, the band still rips off covers of songs anywhere from the James Gang’s “Funk 49” to “Fly By Night” by Rush. On his most recent Vancouver visit, Malkmus treated the crowd to favourites like “Senator,” “Stick Figures in Love” and the sweet, loving distortion of “Out of Reaches.” Playing with tenacity and humour, the Jicks switch up their set every night and are one of the few bands worth following around on tour.

Of course, there were many many fantastic concerts in 2014 not mentioned here. What was your favourite concert of 2014?