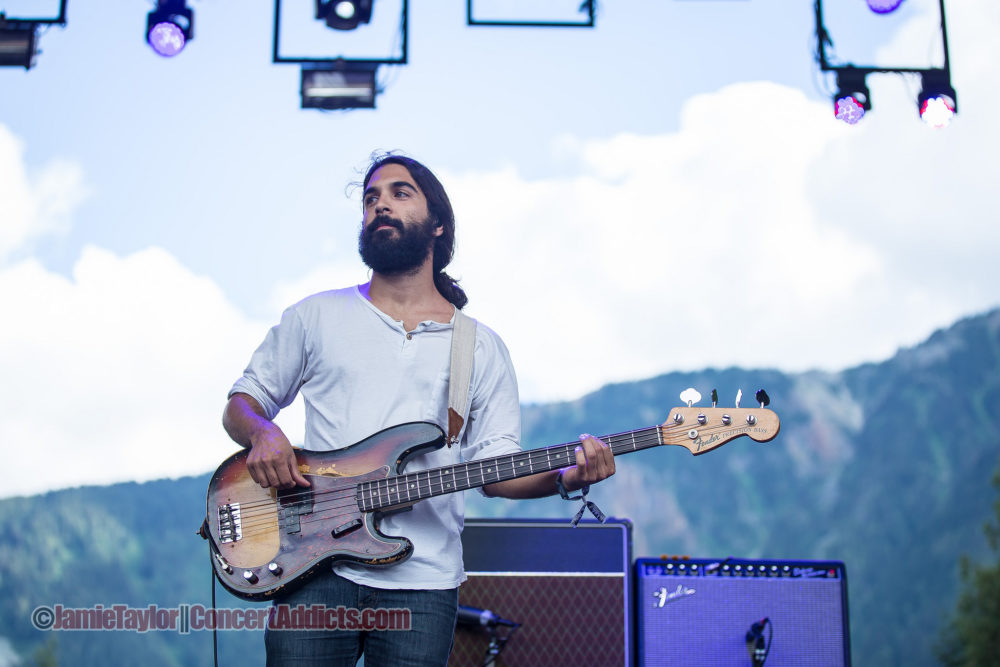 American rock band Young The Giant have been putting out enticing, powerful music for a little over six years now.

In that time they have released three full-length albums; 2010’s Young the Giant, 2013’s Mind over Matter, and 2016’s Home of the Strange. Each compilation has shown growth over the last, as the group has evolved into an explosive indie powerhouse with mind-blowing live shows.

Over the years I have seen them live a number of times.

I have been completely infatuated with everything they have done since the first time I played their self-titled debut. Songs like Garands and My Body would get stuck in my head for weeks on end.

While the band was in town I was lucky enough to steal a few minutes with bassist Payam Doostzadeh.

Your 3rd studio album “Home Of The Strange” has been available since mid-August. Have there been any standouts on from that album that have become favourites to perform live.

PD: The reception has been surprisingly good. Most of our fans…you know…we released the record one month prior to the tour starting, and even in those first few weeks’ people really new every single word. It wasn’t just a couple people up front, it was like half the crowd singing along with all the new material. I think they connected to the new material, quicker than records we had released in the past. I know for Mind Over Matter it took a second for people to get it, but with this record it just happened.

Is there any stand out song, so far, that you consider your favorite to perform live?

PD: Well, the audience reaction to Silvertongue has been really, really good, but overall the songs have all been really well received.

You just played a two-night stint at the Commodore Ballroom in Vancouver. How was the crowd?

PD: Yeah, it was a good show. You know, every show is a little different. Some are slightly more reserved, and some go crazy and start crowd surfing the whole time. It just really varies. We had a good time last night. We just came off from playing some really awesome shows in Southern California and Northern California at the Greek Theater and the Fox Theater, and everyone kind of just went nuts with us. They gave us their all and everything. I mean every show and every town and every city is unique. Here was a great show.

You have opened for many bands, and had many bands open for you.

PD: Well it’s a bit of an unfair question. Last year we brought out our friends who were our roommates. They are an L.A. based band called Wilding, and we toured with them last fall. They opened for us, and we dida really nice run. That was…probably ‘cause they’re our friends, right?… That was really fun. They are actually…I think they got signed to Warner…they’rerecording a full-length record with Joe Chiccarelli actually, who did our first record. So that’s kinda cool to see your friends kinda take a similar path to you did.

I have seen you perform live a few times, and am always blown away by the level of energy you can start your shows with. Do you have any pre-show rituals that help you get to that place for every show?

PD: Umm, I dunno, I think it might just come naturally. You know…before the show we’re always just like hanging out, and listening to music, and stuff, and then we usually do a huddle, then that’s it.

A few years ago, I was in the pit photographing Empire Of The Sun at Pemberton Music Festival, I looked over and saw a few members of Young The Giant standing side stage watching the show. It made me wonder, have you ever played a festival where you were really excited to see some of the other acts on the bill. Maybe even more excited than the fact you booked the festival.

PD: All the time. I was actually at Pemberton taking pictures in the photo pit of that show. We were able to meet Chance the Rapper and he hung out with us, that was pretty cool. I got a couple portraits of him just hanging out with the band. And other bands, I mean there’s obviously the big bands that we get to play with at festivals. I mean, just recently, LCD Soundsystem, Radiohead, Paul McCartney, you know the big headliners. And also the smaller bands we get to see, there’s always bands like Andrew Bird and Feist and Little Dragon, kind of like artists’ favorite bands that may not be that popular, but we love watching them. It’s great, festivals are awesome. Tons of friends, tons of bands to see, usually pretty good food, and just kinda hang out the whole day.

So you said you were taking pictures, are you kind of a photographer also then?

PD: I mean, yeah, on the side. I am trying to get more into it professionally. It is something I enjoy. I’m trying to do more of it.

Nice, do you specifically shoot Canon or Nikon or?

PD: I am a Fuji shooter. I’m all about the new XP2, it’s really nice, it’s compact, the lenses are great. I shoot a little film too, but it’s just kinda harder to do on the road and stuff. You kinda just have to wait until you get back home to, but that’s just more for fun. But, yeah, it’s remarkable what they are doing now with these cameras.

Do you have any standout festival stories? Maybe some strange encounters or something like that?

PD: Yeah, so at Bonnaroo in…I dunno, like two years ago….I think two years ago, when Radiohead headlined, for the Kings Of Limbs tour…maybe it was three years ago. Our bus was parked outside the main stage area, and you could climb on top of our bus and like watch the set, and we wanted to go closer to the front of the audience. So we all held hands, maybe like twenty of us in the group, and we started at the back of the crowd and made it all the way to this front of house area, which is like this VIP area. And we got in, and we’re watching Radiohead from the best seats in the house, and there’s a porta-potty there and an open bar, which was like the cherry on the top. So you didn’t have to like leave the area to go pee. So I was in the porta-potty and I’m peeing and I can see through the slits in the porta-potty, Radiohead, and they start playing Karma Police. And it’s one of my highlights of just like… really having to pee, and like watching Radiohead just from this porta-potty and still having this incredible spot to listen and watch. That’s one of my stories, I guess.

One thing we ask everyone we talk to; are there any lesser-known or under-appreciated artists that you like or draw inspiration from that you think people should check out? This doesn’t have to be musicians, it could be painters, writers, designers, etc.

PD: Oh man, umm.. I don’t know if it’s a lesser known band but Little Dragon has always been one of my favorites. I’m really inspired by them lyrically, melodically, rhythmically, they’re just really, really, really killing it. Another artist, that’s like a producer who works with a lot of people now, his names Kaytranada. He’s getting…I know he’s like really buzzy now…I was listening to his stuff from before he kinda like blew up. It’s great…it’s good to see these people that are really talented kinda get their attention that I …I hope that they deserve. As far as that, I mean, I definitely listen to a lot of really random world music. So you’re talking artists that aren’t necessarily alive today. A lot of African inspired jazz

We work with an organization called Music Heals, and they help bring music therapy to those that can benefit from it. One thing they ask people to do in an effort to spread their name is to finish this sentence – “Music Makes Me….”

I would like to thank Payam for his time.

I wish the band nothing by luck in the future, and hope I can sit down with some of them again in the near future.

Other Young The Giant tour dates: