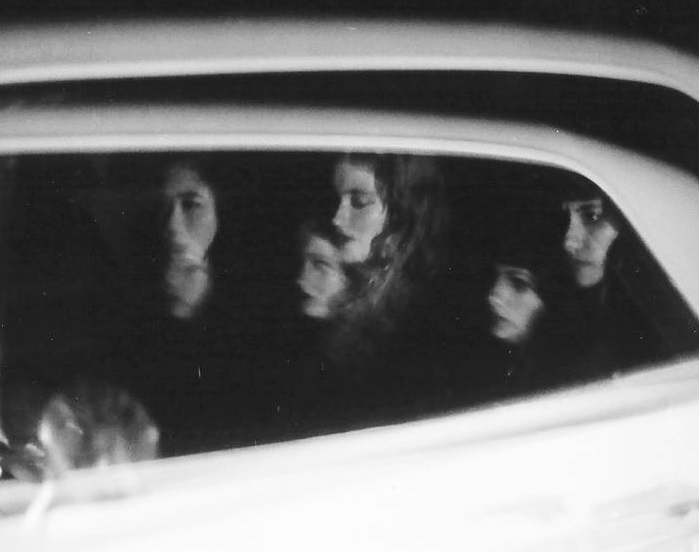 L.A. Witch are a three-piece out of Los Angeles that unleash a sort of punk-influenced grit-rock with psych tones and cavernous echoes that are overflowing with badassness.

The three-piece has been touring steadily for a few years now, and a currently on the road opening for Alison Mosshart and Jamie Hince, better known as The Kills.

We thought it was a good time to track them down and have a quick Q&A session.

You are currently out on tour with The Kills, how has that been going?

Ellie English: So far we have only played one show with them at The Mayan in down town L.A. It was really fun and so cool to see them live, They are great performers.

Sade Sanchez: Our tour begins 4/18 through 06/04. The kills were such an huge influence growing up so its such a dream to get to tour with them. I was blown away by keep on your mean side. It was so minimal, but it was so raw and fucking hard. I had it constantly on replay. I remember making a mix for an x boyfriend with a bunch of their songs. I had never actually gotten to see them but watched a ton of videos. The show at The Mayan was my first time seeing them. I kept thinking how lucky i am to get to see this epic performance over and over for the next few weeks. They’re amazing.

You pressed your Drive Your Car single on vinyl, black and alternatively on smoke-colored. How important has vinyl been in your life, and your exploration of music?

Ellie English: Vinyl reminds me of looking through my parents record collection and discovering a lot of cool bands. My mom has almost every Beatles album. She’s really into the British Invasion so that’s where I discovered Herman’s Hermits and The Kinks. My dad is really into funk, R&B classic rock so that’s where I discovered bands like Stuff, Tower of Power and Led Zeppelin.

Sade Sanchez: Ill be honest. I didn’t grow up around vinyl. My parents didn’t come with much when the first came to California and vinyl kinda died out so my parents were buying cassette tapes. You’d pop one of those in and listen till its stopped and started playing the b side. Then came cds and they also had a shit ton of those. But with those, you can skip tracks and just replay the shit out of ur favorite ones. Now you got spotify and i tunes and you can listen to whatever you want, whenever. I didnt start my record collection until i was about 18. Everything i have for the most part is original pressing because i didnt want it to be so easy for whatever reason. I own a lot of my favorite albums which became my favorite albums because of the vinyl format. I listened all the way through over and over. Thats what so special about it. You let it flow as the artist intended.

Your music really pulls from a variety of styles, from psych to 60s garage to punk, which artists have inspired you the most in your creation of music?

Sade Sanchez: Theres so many to list. Roy Orbison, Lee Hazlewood, The Cramps, BJM, The Gun Club, JAMC, Black Sabbath, Johnny Thunders, MBV, Nirvana, Cocteau Twins, The VU, The Wipers, The Smiths and so on…

What was the first album you ever bought?

Irita Pai: Walk on the Wild Side – Best of Lou Reed cassette tape at a thrift store.

Sade Sanchez: I dont remember. But i remember the first song i learned to play which was Purple Haze. haha.

I am always interested in what artists do during their down time on the road, what do you do when you get a break while trekking/waiting between shows?

Ellie English: In the car we’re usually answering emails, watching movies or listening to music. Sometimes we play games like ‘would you rather’. We do as much sight seeing as we can and we’re all into photography.

Irita Pai: We just watched Predator and Predator 2. Moving on to the Aliens movies next!

Sade Sanchez: I love to DJ. I try to make playlists before we go on the road. Usually stuff i just discovered and wanna explore. We get cracked out on Yerba Mate and talk about ideas for the band. We try to sight see as much as possible. Before shows, we warm up and i like to hide somewhere if i get too nervous. Just so i can calm myself down. I gotta tell myself all this shit so i can get the balls to go on stage. haha.

You are currently a three piece, does that formula feel like it will be the permanent setup of the band or do you feel like it could grow as you expand musically?

Irita Pai: I would be open to expanding the lineup if it was the right person, and it felt appropriate, organic. I believe music always has the potential to evolve and become more complex and interesting, just as people evolve.

Sade Sanchez: I always think about bringing someone else in. I wanna be able to experiment with another guitar or synth or something. I think it might give me some freedom to do more too. But I like the idea of a 3 piece. Idk. If the right person comes through, without a doubt, well bring them in.

As an all-female band, do you feel the industry treats you differently in how it perceives or handles your music simply because of your gender?

Irita Pai: I think some times people have certain expectations when they hear about an all-female band, especially in Los Angeles. There’s a lot of sunshine and garage pop going on here, which is totally rad but not necessarily something we identify with.

Last question for you. You are stranded on a desert island and can chose one album, one favorite food item, and one personal item to bring with you, what are they and why?

Irita Pai: Definitely have to bring things you will never get tired of. So Paranoid by Sabbath, pizza and some dank greens.

Sade Sanchez: shit. I cant choose one album. But food wise… id bring a block of cheese so i can eat it with the fruit on the island. and a guitar so i can play for the rest of my island life.

Well after that nice little over-email questionnaire, we are hoping we can follow it up with an in-person when they are closer to our home base in Vancouver, BC.

These musician have been making solid tunes for some time, and if you haven’t heard them you need to check them out. Start your investigation with Get Lost, which definitely highlights their inspirations from Brian Jonestown Massacre.


Below is a full listing of their current dates:

* dates with The Kills