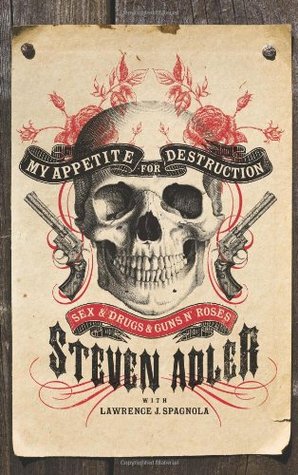 Concert Addicts: So I just wanted to start by talking about your tour. It’s pretty in-depth and widespread, so you must be excited?

Steven Adler: Ya I’m very excited, it starts tomorrow night at the Brixton. We basically have about forty-five shows, all over the US. Very excited, we love being on the road, the band love to perform, cause you know, that’s what a band does. And, you know, we put on an arena show in a club or a theatre, it’s a really exciting show. Plus we’re adding a couple new GNR tunes that we haven’t done before. Plus Axl, Slash and even Duff don’t even do these songs.

Steven Adler: Ya, you know, it’s very exciting. Everyone can check out AdlersAppetiteOnline.com . Check out the show, check out when we are heading to your town. So we have these new GNR tunes, and we got our three singles Stardog, Alive and Fading (Adler’s Appetite on iTunes)we will be playing in the set too. And anyone who is interested can check it out online, on iTunes and Youtube.

Concert Addicts: That’s awesome, we see you have a date coming in Vancouver, not until August, but we’re excited to check that out. It’s going to be a nuts show.

Steven Adler: Oh ya! Oh, I’m sorry, I thought this was for the US, I didn’t know you were in Canada, I love Canada.

Concert Addicts: Ya we’re up in Vancouver on the west coast.

Steven Adler: I’m very excited about doing those shows, you know we’re be playing with some old good friends of mine, the guys from Warrant. We got a few shows up there, we’re very excited. We’ve never played up there. Adler’s Appetite has never performed in Canada.

Concert Addicts: I know were are very excited too.

Steven Adler: I was up there for a book signing quite a few months back, and that was just great. I really got a lotta love. It’s a beautiful, beautiful country. A beautiful place, and beautiful people. America should be so fucking cool.

Concert Addicts: Thank you so much. We are excited, I think the closest that I have seen you guys come up here was you guys were in Bellingham, which is just over the border. That was last year.

Steven Adler: Ya this year is a new year and a new time, a new stage show and we added a new guitar player Lonnie Paul. He has just brought so much to the band. The band is more powerful than ever.

Concert Addicts: I have been checking you guys out, watching some of you live footage. It just blows me away how powerful you guys sound live.

Steven Adler: Thank you brother, it feels good to hear that. ‘Cause now I know for sure I’ve achieved my goal, I’m going to pass that on to the other guys.

Concert Addicts: Especially with your book out. I see you are releasing the book in paperback in a couple weeks.

Steven Adler: Yes, May 17th, it’s coming out in paperback. You know doing that book, it was such a powerful, wonderful experience in my life. I got the opportunity, to. Well, once I face the facts and took responsibility for everything that happened in my life. It was really easy and good to put together, and once I got a very truthful and very honest. And like I say I take full responsibility for everything that’s happened in my life. For 20 years of my life, I blamed the guys, you know Slash, Duff, Izzy and Axle for what happened to me. And once I was able to get together with Slash again and apologize to him for blaming him for all the downfalls in my life. I was, like, reborn.

Steven Adler: Ya, and the book came out last summer and I was on tour at the time. And my book is very easy to read. So I was reading it, and it’s funny when I’m reading it, I get so excited because I can’t wait to see what the hell I’m going to do next.

Steven Adler: And, I already know!

Concert Addicts: And it was a New York Times bestseller.

Steven Adler: It’s like getting a new gold record, it’s really great. But what I was trying to say about the book, is, once it came out I got to read it. And I got home and built a big fire at my fireplace and I threw the book in there.

Concert Addicts: And that was it?

Steven Adler: I wanted to leave my past behind, live in the now and believe in the future. I can’t change anything that’s happened in the past and I can’t relive it. I’m just thankful that I came out of it okay.

Concert Addicts: It’s amazing the books touched on a lot of things, you seem like a new man. I guess it takes a huge weight off your shoulders to get that out of your system.

Steven Adler: Ya, you know, apologizing to the guys. That was the biggest thing, that, I mean. After I apologized to Slash, then I woke up the next morning and my muscles hurt so bad. Like when you work out with weights too much. You know that feeling?

Steven Adler: It was all the hatred and anger and denial that I was holding into my body for twenty years, I let it free. The truth will set you free my brother.

Concert Addicts: Here Here! Ya, that’s fucking amazing. I mean I’m glad you got that book out there. It’s doing so well. We’re excited for the release of it, May 17th the paperback comes out. Just with the public battles, you’ve had with your struggles with your demons, is there anything you might want to say, to motivate anyone else out there, that’s had or having a similar situation in their life?

Steven Adler: Well, if someone has somebody in their life that they love and care about and that is addicted to drugs or alcohol. Then I have to say the best thing that happened to me was that I was videotaped, high. And I got the videotape a couple days later. Cause you know if you’ve ever done drugs, or drink and have blackouts, your friends will tell you, you did this, that and can’t believe this shit. Then cause you videotape them, let me tell you when I saw myself on heroin on video, I was crushed.

Concert Addicts: I could imagine

Steven Adler: It was brutal to see. Cause you know if you do drugs, people do drugs. Well let me just say, I did drugs because it made me feel more comfortable, made me feel like I was bigger, like I was better and stronger. And then I saw myself on videotape, and I was like – Holy Shit! Imma ugly son of a bitch!

Concert Addicts: We could relate to that.

Steven Adler: It was a big eye-opener. And also just believe in yourself. All I can say is I have been down a shitty ass road you can’t imagine, and came out of it. You know in my book, I burned the candle with superstars and survived to share my story. Okay and I’m thankful for that. You know the books about all the warts and the scars and the tattoos my life in rock n roll. And I wouldn’t change if for nothing, now that, I mean I would change the drugs because I wasted twenty years hating people, who weren’t even thinking about me.

Concert Addicts: It sounds like you gotten to a place where you’ve let things go. And it sounds like your happy and ready to rock and kick some ass on stage. We’re all excited to see that. I’m really glad you took the time out of your busy schedule to give us few moments to give us some of your words. It’s really inspiring to hear you talk about the
drugs, and I think a lot of people out there will get a lot from your story. We want to thank you up here.

Steven Adler: Dude, you rule brother. Thank you much for your time, I appreciate it.