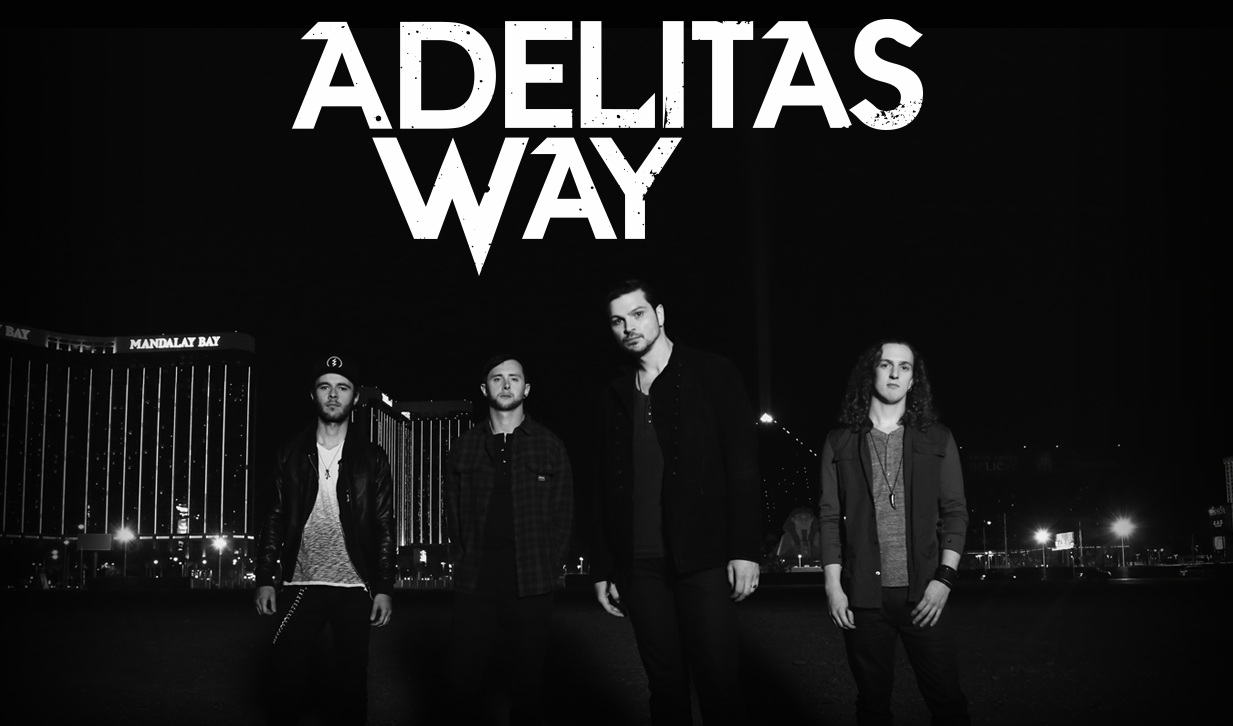 We were able to steal a few minutes away from Rick DeJesus, the frontman for Vegas rockers Adelitas Way. He was one of the nicest people you could ever hope to talk to. Here is what he had to say:

Concert Addicts: Since you guys originated from Vegas, do you think that helped you on the road, being that it’s a show town?

Rick DeJesus: You know what I think, I think you find yourself on the road as far as who you are as a performer. Any band that’s been a local band or any band that… you could play a hundred shows locally and you still won’t be what you’re gonna become once you get out on the road.

Rick DeJesus: Touring is important and touring really defines you as an artist.

Rick DeJesus: Even as musicians, when you’re out and you are sacrificing everything you are sacrificing to be on the road. It’s a tough gig. You make sure that your shows are exceptional every night, you don’t accept anything but spectacular performances day in and day out. I think being out on the road you really push yourself. You know, cause you are driving 10 hours. And no one is driving 10 hours for a venue and spending $700 in gas getting there, and then suck.

Concert Addicts: I agree with that. That’s really interesting. I mean I never really looked at it that way with growing on the road. I guess on the road, you guys are stuck in a tin can? You guys tour by bus, right?

Rick DeJesus: We go both. We go by bus, whatever makes sense. Its all economics, the music business has changed. Its changed so dramatically, like people don’t understand. No one wants to pay for music any more. So essentially you’re making these albums and there almost like commercials to get people to come out to your shows to buy t-shirts and shit. I think for me, we tour whatever makes the most financial sense. The reason we have been able to do this for the last 8 years is that it’s a living. It’s a living for us. If for 8 years we were on a bus for each and every show while we on the road it’d be a constant loss. So sometimes we’ll jump in a 15 passenger van and we’ll do a 6 week run.

Concert Addicts: That’s nuts. That makes sense, with the decline of the average music sales its exactly as you said. Bands are making these albums and thats whats drawing into their shows. But then you get to see great bands live more often, so it’s a win, but its definitely, I’m sure more taxing on you and on your life and everything.

Rick DeJesus: It really is. When I was young in my career, we toured non-stop and nowadays we choose our tours wisely.

Concert Addicts: I see that you guys have one more announced date, and that’s at the Rock Fest in Wisconsin. Do you guys have anything else on the horizon possibly? Any other festival dates, or possible plans for tours?

Rick DeJesus: Ya, I think people are going to see things popup. You know first things first were gonna go finish the full length album. In April and May we’re gonna finish the record, and then we want to headline in June and July. So everyone can expect to see us do a headlining tour in the summertime, we’re looking to go out strong.

Concert Addicts: That’s awesome, I hope you guys have some West Coast dates. I’m up here in Vancouver, BC, Canada. I’ve only had the pleasure of seeing you guys once. You opened for The Pretty Reckless at the Vogue Theatre here.

Rick DeJesus: Oh yeah, that’s a beautiful theatre and we love Vancouver. Every time I come to Vancouver I have the time of my life.

Concert Addicts: We’ll gladly take you up here any time that you want. That show, it actually got me on to you guys after I saw you open. I’ve been listening to you pretty steadily since then. You guys put on an amazing show.

Rick DeJesus: I appreciate that, that means a lot. That’s what we hope to do every time we go out. We go out and the people like you that have never heard us before. We come to Canada, and we try to just be ourselves and do what we do, live. Make people feel like – “Whoa! Who the hell was that?” You know?

Concert Addicts: And that’s exactly what happened. I had heard you guys a little before, and then I saw you live and it just blew me away. Honestly, I thought that you outshined the headliner that night.

Concert Addicts: It’s refreshing to hear that. Like you were saying before, you travel 10 hours you don’t want to , after being on the road so long, put on a bad show. Its refreshing to hear that because it almost feels like some bands just do that now, and that old school rock’n roll style of its-all-about-the-music has kind of gone out the window.

Rick DeJesus: We are one of the last ones left. We are all about the music. Everything we do is based on our love to play together and to play music. Another way that I look at things is that, sometimes the day is tough. Sometimes we get to see a lot of great things, but being on the stage every single time we play that’s the moment of truth for me. That’s the moment that makes it worth it. That’s the moment where I let anything that pissed me off in the world go.

Concert Addicts: It’s a good place to do it. It really communicates well across on that stage seeing you guys up there. You know when I went down there were a lot of other people in the industry that came down just to see you perform. Like people I don’t usually see out, that were out there just to check out Adelitas Way.

Rick DeJesus: That’s great. Speaking to the 2015 headlining tour we’re gonna do in June, we really want to come back to all of Canada. You know we want to make sure we hit Vancouver and Toronto and Edmonton and Montreal, and some of the other places we have only been able to play a couple of timesm like Quebec. We want to make sure that we come back and play all of Canada any time we do headlining shows.

Concert Addicts: That’s pretty awesome. Like I said, we will gladly take you up here. You were talking about the new album, I know you guys released that 5 song EP – Deserve This, only last week.

Rick DeJesus: It was supposed to come out today (March 17th 2015) but we released it a week early. In an industry where records are either not coming out or getting pushed back or getting delayed, we wanted to reward fans for once. Instead of them always scared their favourite CDs gonna come out a month later then they thought. We wanted to surprise everyone and drop it a week earlier then anyone anticipated. Kind of like – Boom! And the reaction from that was really awesome.

Concert Addicts: I saw it hitting all over the social streams. Everyone is talking about it. That got me interested, you were just talking about finishing up this new album. I see that it was unofficially called “Alive”, but I guess that won’t be official until its dropped. Do you know if that is going to be the official title?

Rick DeJesus: No, that’s not going to be the title.

Concert Addicts: So that just a working title, or someone just found that somewhere?

Rick DeJesus: For me, that’s people doing a lot of guessing. I don’t name records until they’re completed. It could be the last song that inspires me to change it. At the end of the day I really never name an album, or doing anything like that, until I hear everything.

Concert Addicts: That makes sense, it’s like naming a child before it is born.

Rick DeJesus: Exactly! And I never do that either.

Concert Addicts: So how far along are you in the album? Is I just down to just polishing it out? Or do you have a few songs to work through?

Rick DeJesus: We’re working through songs. We’re still working through them because we have a high expectation of ourselves as artists. We want to make sure that everything we put out is something that people love and that we love. A lot of bands and a lot of songwriters that try to write a song in one day or thirty minutes or an hour. We don’t do it that way. We spend weeks on these songs; jamming, sweating, bleeding, work and pain and pride and arguing. People don’t realize the blood, sweat and tears that goes into making records.

Concert Addicts: That’s how it should be. From my side looking at it, those are the great albums. And you guys are always putting out great music, so we are definitely looking forward to hearing that.

Rick DeJesus: Thank you, so much.

Concert Addicts: I think that’s all the points I wanted to touch on. I think you mentioned that you are looking forward to a headlining tour in June, is there anything else you wanted to touch on? I mean you’ve got a tour possibly coming, and then you have the album release coming out, is there anything else you wanted us to talk on? I mean that is already lot of stuff anyway.

Rick DeJesus: You know the number one thing I always want to touch on is that first I want to thank the fans for everything they did. Nowadays we are in the streaming business where you can just go listen to an album for free. You can go on Spotify, its rare that people are going on iTunes or going to the store and buying records. Where we have to connect the artist and the fans, is buy a ticket to a show man. Buy a ticket and a t-shirt, and if you do those things your favourite bands will be around forever. We don’t mind putting our music on Spotify. The one thing we just want to see from that is just if more people are listening, we would love those people to just check us out and come experience a live show.

Concert Addicts: I’ve said this a few times through our talk, its refreshing to hear that. It feels like these days some of the bands out there aren’t feeling the rock n roll and thinking about the fans.

Rick DeJesus: That’s what separates us from them, and that’s why we are still hill and other bands come and go.

Concert Addicts: Well that’s all I have. If you make it up to Vancouver I’d like to just buy you a beer and shake your hand, because this has been a tremendously humbling experience, and you’ve made it very easy as you are easy to talk to.

Rick DeJesus: I appreciate that, and I look forward to that beer.

Concert Addicts: Thank you for all of your time.

If you want to find out more about Adelitas Way, you can check them out at their website – adelitaswaymusic.com