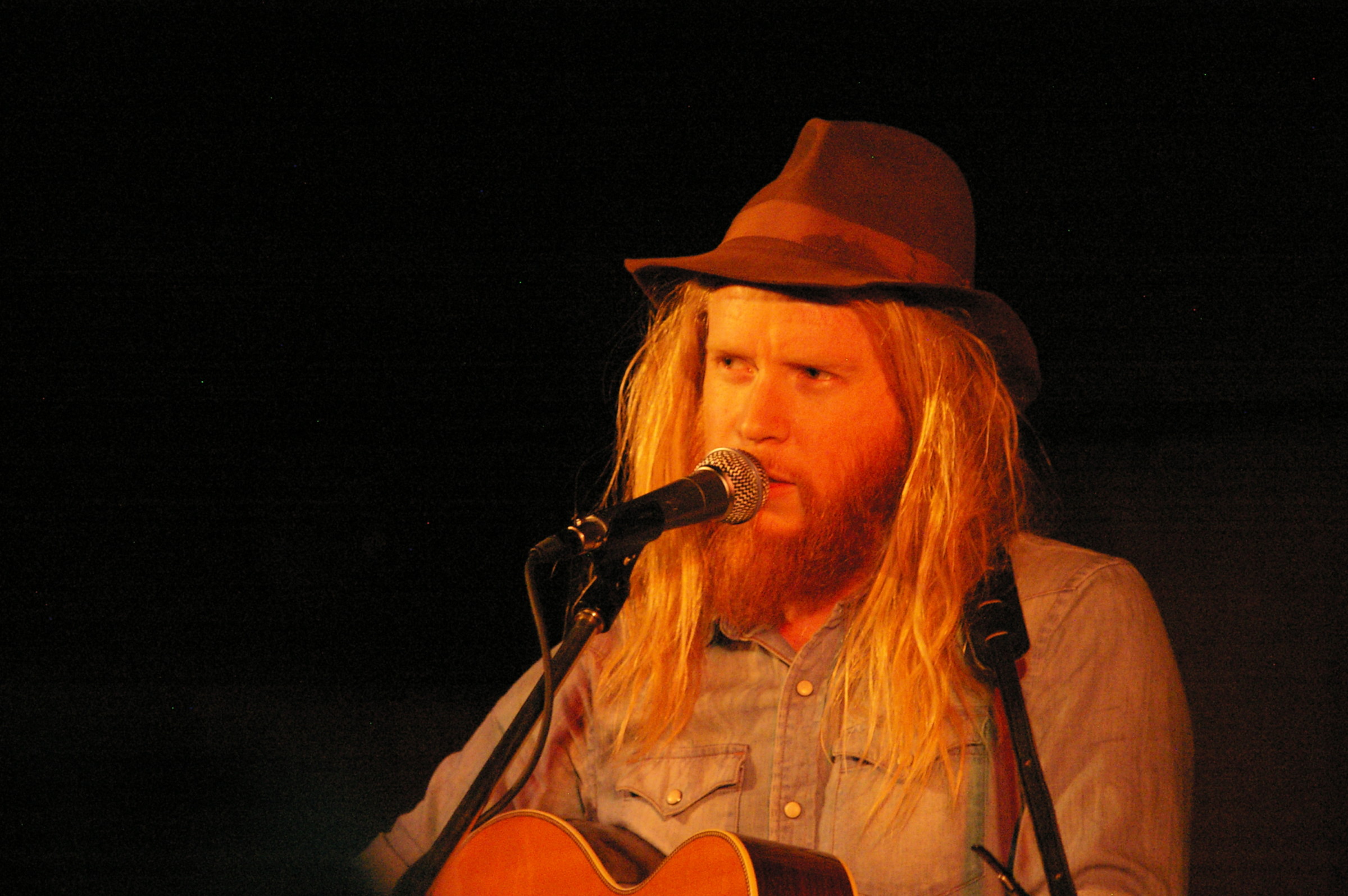 I had the incredible opportunity to catch up with Stu Larsen on the phone while he was staying in Seattle and just days away from arriving in Vancouver to perform at The Media Club. I know we were all really looking forward to having him return to play for us. Stu graciously agreed to talk to me after arriving on a plane from Japan and being awake for nearly 32 hours! We had a good, long chat. He told me about writing, travel, the artists that he loves, and following whatever is in front of him.

When and why did you start playing (originally)?
“My mother forced me to do it [chuckles] I was a really shy kid, so she suggested I learn guitar. Slowly, over a couple of years I started to enjoy it, and it all kind of went from there. I started playing these little shows and leaving my hometown to travel all over Australia and taking opportunities that would come along. It’s been a pretty amazing journey.”

Did your mother push you to pursue music simply in order to socialize you and get you more confident, or was she musical as well?
“Yes Mum was and still is, very musical. She was in a folk group in the seventies, I believe it was. She still plays piano and flute and a few other things. When I started learning, she gave me her original guitar that she’d had for about thirty years or so, so I learned on hers. She’s very musical. My father couldn’t really sing in tune, so it definitely came from my mother.”

Have you ever played anything other than guitar, or has it always strictly been guitar?
“I tried to learn the piano. My mum tried to teach me, but it didn’t really go anywhere. I wanted to learn, but I couldn’t get my head around it. The guitar just made more sense to me, so I stuck to guitar.”

What would be your fondest musical memories?
“There’s been so much that’s happened over the last 3 or 4 years. I think playing with Natsuki (Kurai) who is coming up on this tour. Playing with him at a festival in Australia in 2011 was a very, very, very special experience and still something I remember so clearly. He came and played about 4 songs with me and there were about 5000 people in the crowd. It was just an amazing half hour where everything just seemed to be perfect. He’s one of the most amazing harmonic players I have ever seen. Playing with him anytime is a really special thing.”

There’s a lot of travel/location themes in your songs (“San Francisco,” “Ferry to Dublin,” plus mentions of Australia, London, Belfast) Does moving around inspire most of your writing?
“It does. I think whatever is in front of me inspires it. Over the last 5 years I’ve been on the road non-stop so there’s lots of places that I fall in love with, and every now and then it inspires a song or a city name sneaks into a song.”

It seems that being on the road is almost the key to your creativity and your writing process.
“Definitely. I’m a little nervous about what to write about when I do eventually stop moving around. I don’t know what inspiration will come. Surely something will be there, but I’ve been traveling for so long now and all my songs are inspired by the travel.”

With “San Francisco” as the first track off of your album (Vagabond), would you consider that to be one of your favorite cities?
“It is, but the song was written more about the unknown journey itself to San Francisco. I fell in love with the coast of California initially on the way to San Francisco. I always try and make time to go across the Golden Gate Bridge and up the hill on the other side to look at the city. There’s something really special about that.”

Is there one particular song that you’ve written that you hold near and dear to your heart? (If you had to choose?)
“I think San Francisco. I wrote it at a pivotal point. I love the line that says, ‘I won’t know where I’m going till I get there.’ I’ve never really had a five-year plan or an end goal. I just want to keep following whatever is in front of me. I just love the journey and the adventure.”

How do you keep track of your ideas, do you carry around a notebook?
“I do carry one around with the best of intentions [laughing] but there’s absolutely nothing in it. When I have ideas, I generally play around with it for a while and then record it onto my phone, so I have the melody and the cords. When I take some time out, I go back through my phone and re-discover all these little song ideas. Some of them I have completely forgotten about and don’t know where they’ve come from!”

You’ve been touring all over the world. Do you have a favorite city or country you enjoy performing in the most?
“That’s a tough question. This last year, pretty much every show has been of such high quality. I think that comes from going to these cities several times over and the crowds are more familiar with what I’m doing so the vibe just keeps getting better. Canada is a really special place. People always told me I would love playing for Canadian crowds. There seems to be a deep appreciation for the singer-songwriter style there. There’s also a lot of heritage with Neil Young and Joni Mitchell and those types of artists.”

When I saw you in Vancouver last year, you seemed quite comfortable on stage. Do you ever get nervous before you perform?
“Yes, every show there’s nerves. I think it’s a good thing, because it’s not overpowering nerves. The first time I had to sing in front of a lot of people was the end of Grade 12 in Australia on the last day of school, and I got up and sang in front of everyone. There were about 1000 people there, and I had these nerves that overpowered me to the point where I wasn’t sure if I could go on stage. When I got on and started playing, everything was just cool and I said “I can do this. I know I can do this.” That’s the only time it’s been overpowering. Now I get a little bit nervous, but it’s more about the unknown; what the vibe of the crowd is going to be like and if people are going to have a good time, but once you get on stage, everything feels good.”

This is definitely a cliché question but, do you have a dream duet, dead or alive?
“Oh, dream duet, dream duet…[thinking] the people that instantly come to mind are artists that I wouldn’t dare do a duet with because they’re way too special. Ray Charles comes to mind, but I’d more like to be in the same room as him and soak up his vibe and hear him sing face-to-face, if he were still alive. That would be the most amazing person to hear. I think it would be cool to maybe do a duet Ray LaMontagne.”

Have you ever met Ray before?
“I haven’t, but I discovered his music by chance just after ‘Trouble’ had come out. He was in Australia as a replacement for Howie Day and was playing with Ben Lee and Missy Higgins on an Australian tour. I was so thankful I went.”

Can you discuss how you came to be signed with Nettwerk (Music Group)?
“The connection came about through Mike Rosenberg (Passenger). He had been signed with them for a year or two, and obviously I met all the folk along the way that he worked with as I was tour managing him, so we got to know each other, (Nettwerk and myself) that when it came time to release something, it just made sense. They’re amazing people and really, really cool to work with. They seem to understand what I’m about, and they really get their artists and work with them in certain ways that is suitable to those artists.”

Is there another album in the works?
“Yes and no. I’m slowly writing. There is the planning of a new album, but I have no idea when that will be, but I’ve got a few song ideas. I need to take some time out to write and finish writing and see what happens from there, but I’d love to have something out next year.”

Do you have any openers on this tour or any plans to do more touring with Passenger?
“Natsuki Kurai and I will be playing together, and there’s a guy called Matt Sanders doing the whole tour with us. He’s a really cool musician and has become a good friend, so we decided to bring him along. I think it’s really cool to have a friend and someone you know on the road. I want people to follow his music and help get him in front of crowds. It’s like a good endorsement. Mike (Passenger) and I are going to do some shows together in the summer in Europe, and hopefully more down the road, but we’ll just wait and see. It’s going to be a good tour!”

(And Stu and Natsuki did a wonderful job at The Media Club!)