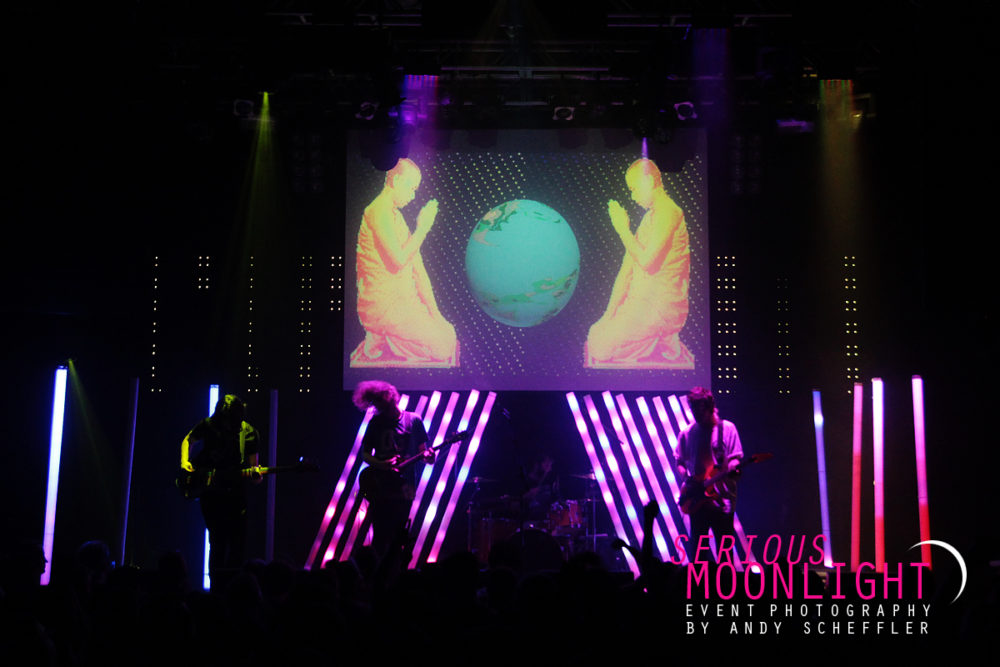 I got to Venue just moments after Anamanaguchi had hit the stage. This band plays live instruments over chiptune music, with a focus on vintage video game sounds, though stylistic influences range beyond that. It is a heck of an event to behold, and the fans of this band go absolutely apeshit over it. While I wouldn’t go so far as to classify myself as a gamer, I dig games and enjoy partaking in some of the culture, but the folks here are face deep in it for sure, and I was actually surprised at the intensity of the crowd. It was a challenge to get near the front for photos, but managed to squish my way to the side of the stage where guitarist and songwriter Ary Warnaar was standing, a grin on his face. They incited full-bore moshpits at times during the song, and these people looked absolutely thrilled. The stage set-up was hugely mesmerizing, with a pattern of light tubes poking up that could turn just about any colour, and of course, a screen hanging above that showed 8-bit graphics from video games or 8-bit-graphic-ified comics, abstract geometrics, and other imagery. As certain songs struck up, I witnessed people in the crowd just yell their approval. Having finally managed to get to the back of the room again, I contemplated reaching the other side, but felt it might be impossible, The second level of Venue was closed off this night, and I asked the security personnel if there would be any way to get up there for a few minutes. They said it was all locked, but did offer to get me onto the ‘plateau,’ an elevated area that connects the four booths in the middle of the dance floor together. That was great – I felt like lord of all strutting up on that thing, higher than everyone else, and it did give a great view of the whole symmetrical stage set up.