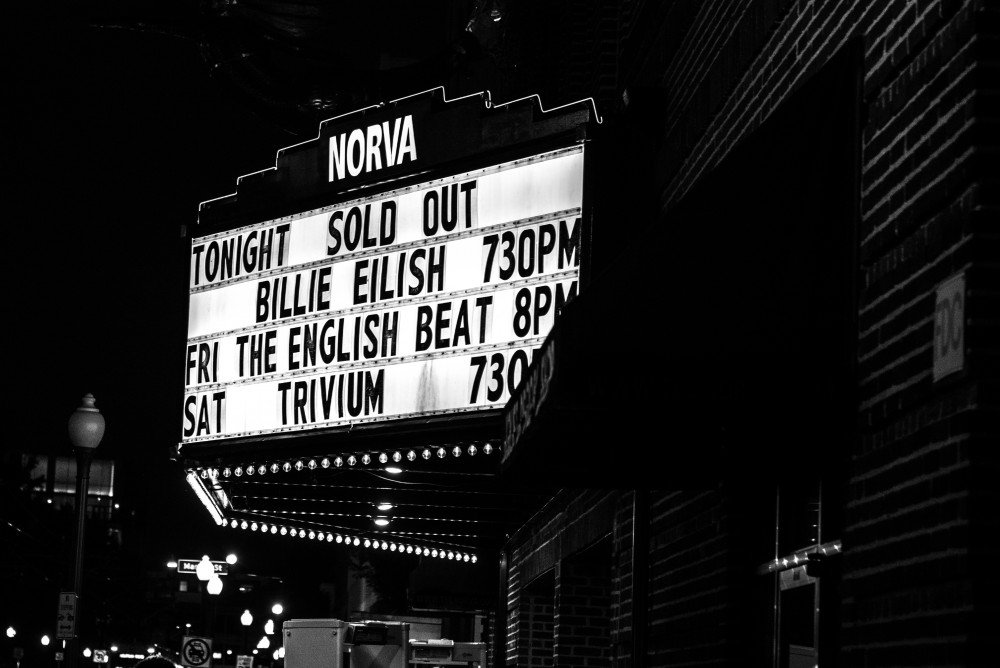 Very few words can accurately describe the enigma that is Billie Eilish.  The blue-haired siren’s powerful yet delicate voice doesn’t betray her young age of only sixteen, the heaviness of her lyrics revealing an artist who’s mature beyond her years.  Eilish’s flitting between biting aggression and vulnerability is part of what makes her so special in today’s music industry-the emotion in her voice is tangible even on the record.  This uniqueness was what drew me to the Norva to capture her headlining set. Rather than a quick 30-40 minute performance, a headlining set offered an opportunity to fully immerse in Billie’s headspace and properly experience her emotions- from loss to love and cynicism.

After a brief performance by Billie’s brother FINNEAS, a ravenous and restless crowd buzzed in anticipation of Billie taking the stage.  The audience for Billie was noticeably younger than I was accustomed to, maybe on account of Billie’s own age attracting an early teenage fanbase.  As the trance-inducing intro to Bellyache hit, the entire crowd burst at the seams in reply.  How Eilish managed to turn a song about murdering her friends into a catchy, almost sweet tune is beyond me. But, as with most of her material, there was a lingering haunting, melancholic edge to her voice.

That edge was never so apparent as on the next track, idontwannabeyouanymore- a song laden with hurt that comes from a person first, not an artist.  The drawn-out “I Don’t Wanna Be You… Anymore” of the chorus sent chills through the audience. As Billie herself has said, “(She’s) never said anything (she’s) ever meant more than that”- and the gravity of her statement is truly felt.

From irresistibly danceable (watch &burn) to crushingly emotional (six feet under), Eilish proceeded to take the sold-out NorVa crowd on a journey through her mind.  Punctuated by a ukulele cover of Drake’s “Hotline Bling”, the unpredictability of which emotion would be expressed next was mesmerizing.  An unreleased track, “when the party’s over”, was captivating, a simple ukulele arrangement, allowing Billie’s voice to shine through even more.  As a definitive left-hook to the crowd, she followed the tenderness with the arrogant, in-your-face song “you should see me in a crown”.  The bass drops shook the room, and the intensity reached new levels to match the fittingly cocky attitude of the track.

As Eilish slinked off stage to the final “goodbye” of My Boy, the indignant screams of the crowd mixed with “Billie! Billie!” chants didn’t cease until the intro of “Hostage” broke the cacophony.  Stripped down and honest, this song to me was the epitome of Eilish’s artistry.  Darkness blended effortlessly with longing and love, giving doubts about motive just by her delivery.  The penultimate track, Copycat, proceeded to shatter that tension, shaking the floor and getting the crowd moving in a very Slipknot-esque way a la Spit It Out.  The entire audience got low and silent during the buildup to the final chorus, then expended every ounce of energy left bouncing to the outro.

All in all, Billie is here to stay.  Her performance is unforgettable, and you’d be foolish to miss the next time the little blue-haired muse finds her way to your city.