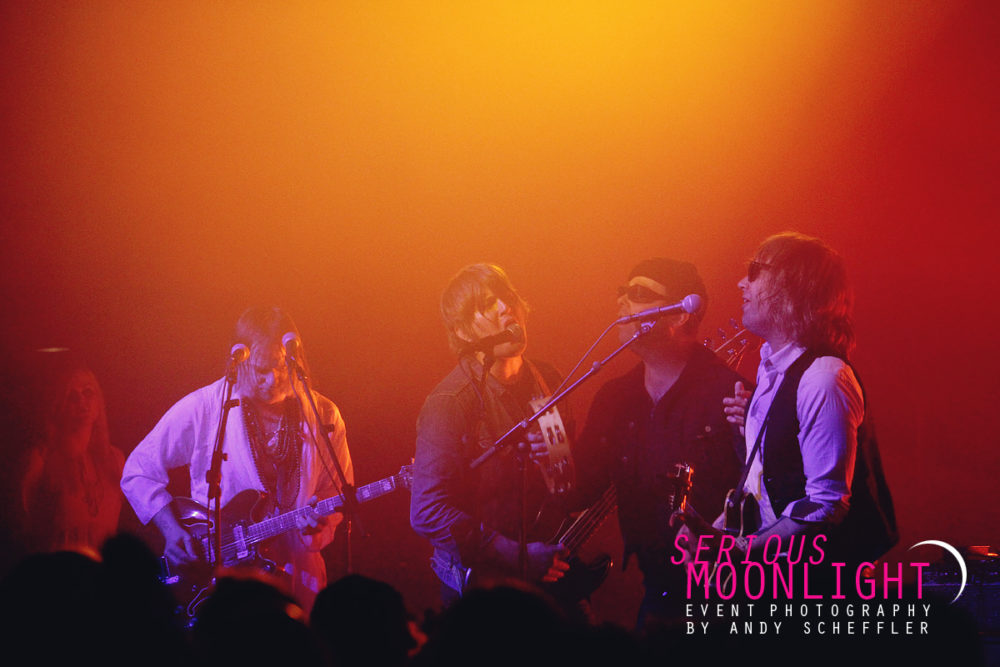 These guys… doing a sort of ‘A Night With’ type of show, the Brian Jonestown Massacre played nearly a three and a half hour set of their brand of lose-yourself psychedelic rock. I have seen them before a few times, and of course they are pretty notorious and documented for singer Anton Newcombe’s quirky behaviour and take-no-shit attitude on stage. Virtually none of this was in play tonight. The show was fairly uneventful on that front, and notably (thankfully) absent were the usual small but vocal group of dingbats who seem to come out just to see if they can piss him off. Instead, the audience reveled, danced, sang, and even moshed (a little surprising, not gonna lie). Aside from one well-deserved finger-wag about not throwing beer glasses at the stage (leading to Newcombe urging the audience to be vigilantes if the security team in the house wasn’t going to do anything about such shenanigans, and something about how it’s dangerous in case your girlfriend gets hit in the head with a pint glass), and some almost-disguised admonishments of things the band apparently messed up (I think there was a shapeshifting reptilian controlling the tempo on that one.. and something about how different it would be if you weren’t paying attention while driving… “Oh, I’m really enjoying driving around and OOPS, I hit a tree.”). His chatter between songs can go off on some tangents that are vaguely related to whatever spurred them on to begin with, but it’s hard to know quite how he made the leaps sometimes. At one point there was a monologue going on about drunk Italians and European statues, then he talked about taking Anton Corbijn-style photos of their mandolin player on this night, Cristoph Certik, who was indeed a tall and striking fellow. Otherwise, I was mesmerized by Newcombe’s incredible puffy white muttonchop sideburns, and by Joel Gion’s somewhat snooty-faced, utterly into-it tambourine playing. The guy was amazing, and of course it’s not a good psych song without a jangling, ever-present tambourine sizzling across the backdrop. He was amazing. So, pretty even keel show. Everyone’s clothes stayed on, no one got kicked in the head, heck, we were even thanked in a humbled way for being in the room. The music was sensational, as always. Big sounds that hit you full in the chest, and a mellow chill out vibe. Lots of girls on shoulders (until security got them down), a few crowd surfers (one guy managed to hang on to his beer while doing so), and plenty of pleased people. I did notice the room was visibly emptying after two hours, but the majority of the room was there til the end, and when the band left the stage, the audience remained, cheering their heads off, until Certik popped out from the side of the stage again and made no more – sleepy time gestures to the room. I have since seen a video posted by the band from upstairs in the dressing room which overlooks the Commodore stage, incredulous that the audience wanted more after almost three and a half hours! You’ve got fans, BJM, you’ve got great fans.