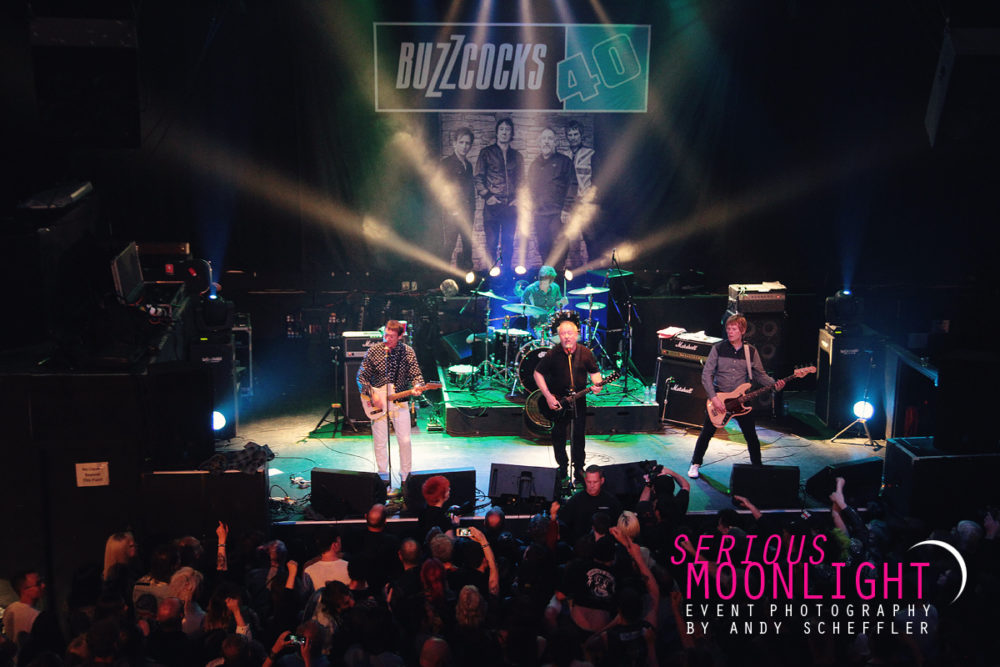 Buzzcocks brought their 40th anniversary tour to Vancouver recently, and I was there in the very nick of time to capture it! Having arrived direct from my day job, I figured I had a few minutes to pop to the washroom before their set start. The line-up for the washroom itself proved entertaining, as one particularly tall girl in denim with flaming red hair hollered around the corner, “If someone’s doing cocaine in the bathroom, hurry up… I gotta pee!” A response came from inside. “If you can’t do coke and pee at the same time, you’re doing it wrong!” So it’s that kind of night, is it?

Not only did Buzzcocks hit the stage on time, they actually started up about 15 minutes early, while I was still finishing up in there! I dashed downstairs only to discover a sold out crowd of punks is quite the immovable object when trying to weave to the front to shoot. I charged through the bar lineup and squished myself into the odd little media pit in front of the Rickshaw stage. The crowd was already over the moon, and within the first couple songs, crowdsurfers were already dropping onto us from the top of the moshpit. Folks were having a bang-up time. Guitarist Steve Diggle is a particularly good time to watch, with lots of kicks, flamboyant arm movements and cheeky grins. Delightfully, as I finished up front and started to make my way upstairs for some more shots, singer Pete Shelley could be heard remarking, “This is a new one from twenty years ago!” The upstairs area here was hot and sweaty, and kind of moving, alarmingly. These punk pioneers are still making new fans today, as well as keep their original fans around. Diverse crowd and very fun show.