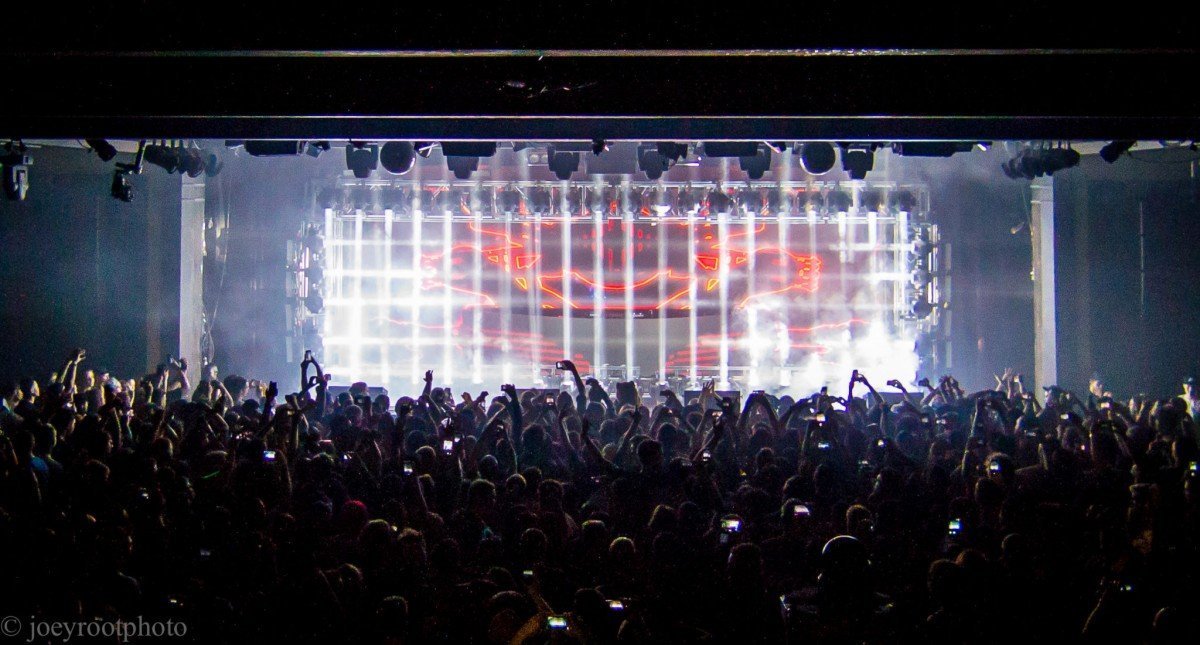 Excision kicked off his 2016 Paradox tour this Friday in Vancouver, BC, with a pair of back-to-back sold out shows at the legendary Commodore Ballroom. This year he is boasting a towering set of LED screens and what appears to be his new standard— a thunderous 150,000 Watts of PK Sound. With support from fellow bass-heads Bear Gryllz and Figure, they are poised to wreak a path of total destruction across North America.

Friday night began with a set from the most mysterious member of Excision’s team, Bear Gryllz. Hailing all the way from Yosemite National Park, it is alleged that Gryllz once ate an unlucky hiker and taught himself to make beats on his stolen laptop. He has since adopted an aggressive style of music fit only for a terrifying grizzly, a persona he fully embodies with a very cozy-looking costume. While the man behind the mask remains a mystery, the energy he pumped into the room was more than clear. Either transfixed by his hard hitting bass, or his ridiculous bear head, the crowd was definitely feeling it.

Next up was Figure who provided his hellish take on bass music. Weaving a blend of his signature dark tones with the look of a madman, he raised the dance floor like an army of the undead. Even after 30 minutes had passed since he was scheduled to finish, Figure remained at the decks, digging deep into his repertoire and producing anything from ghoulish strings to Rick and Morty quotes. Despite the delay (eventually explained by a ‘Help’ menu visible behind the curtains) the persistence of supporting acts and X-citement for the headliner was enough to keep the crowd buzzing.

Finally, after a short break in action, the curtain dropped revealing floor to ceiling, fully 3D-mapped LED screens. The stage was transformed into a futuristic war machine as Excision took his rightful place at the head of command. As the Paradox engaged, an earth shattering rendition of Jauz’s ‘Rock the Party’ whipped his troops into a frenzy, embarking on an epic journey through space and time, with PK stacks providing the goods at full capacity. One moment we were in outerspace, the next waging war with a giant tank —suddenly there was a full-size dinosaur roaming the stage? (Not a projection this time, people!)

Blasting past the usual curfew of 2am at The Commodore, Excision went deep and pushed his volume to the limit. In the midst of his own track ‘Live Wire’ an actual wire fell from the roof and was left dangling a mere inches above the crowd. The signature Excision sound was intimately combined with mind numbing bass and dynamic visuals to create a truly immersive experience which rocked the whole building. The Paradox is something which must not only be seen and heard to be believed, but also felt —in person, as a member of Excision’s own army.

Enjoy at your own risk, earplugs highly recommended.

No lacking of energy from the crowd

Our leader for the night

Throw your X’s up