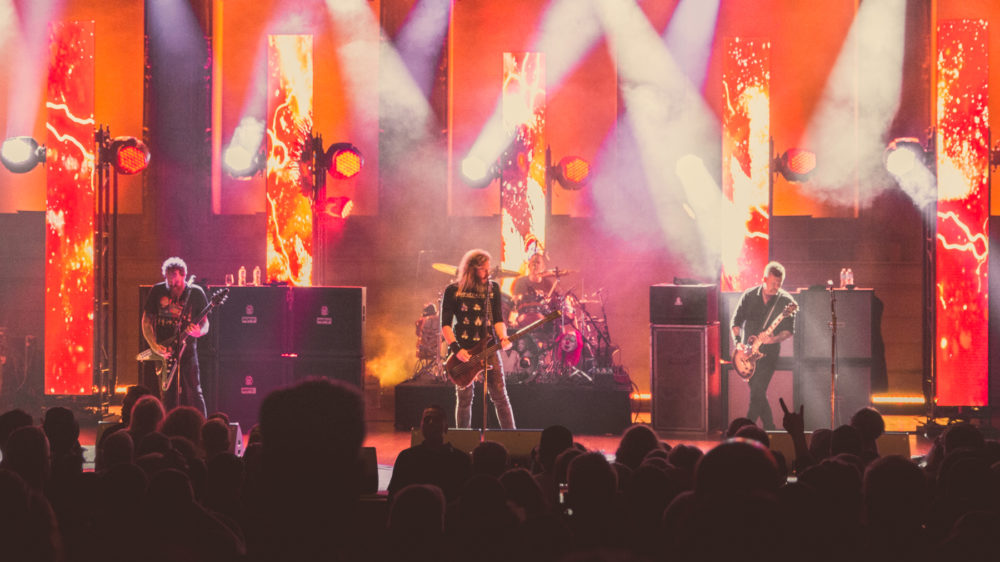 It was an incredible night for all rock and roll/heavy metal fans and on stage antics. Eagles of Death Metal took to the stage to ‘Magic’ by Pilot, getting everyone up on their feet as lead singer Jesse Hughes sang the lyrics whilst reaching for high fives from the crowd. They opened with their classic ‘I Only Want You’ and had a mysterious extra band member running around in a clown outfit playing along on guitar. With a closer look it became clear it was Mastodon’s Brent Hinds. Jesse and Brent shared a dance up and down the stage whilst prolonging the outro.

Halfway through the set wizard/guitarist Dave Catching took the limelight and let out a 5 minute guitar solo. Following this their Canadian bassist Jennie Vee did a roaring cover of Motorhead’s ‘Ace of Spades’. Another special guest came on stage, this time it was Ehren Mcghehey from MTV’s Jackass. He requested that Jennie Vee kick him in the balls as hard as she physically could, leading to him crawling off the stage. Finally, closing their set with ‘Speaking in Tongues’, two massive wacky-waving inflatable tube men appeared from corners of the stage.

When Mastodon came on stage, they surprised fans with their monumental 13-minute track ‘The Last Baron’. After being blown away by each members vocals and instrumental finesse, they turned to many of their newest tracks from the ‘Emperor of Sand’ album. The Orpheum lit up from their LED screens scattered around the stage with visuals of demons, sea creatures and album artwork. Brent Hinds continued his on stage antics by throwing out Halloween skeleton sun glasses and pushing security out of the way to let fans come closer to him as he shredded guitar solos. 16 songs later, they went back to their first album ‘Remission’ and played ‘Mother Puncher’ before closing the set with their latest riff filled hit ‘Steambreather’. After the members all took a bow together, drummer Brann Dailor grabbed a microphone to thank the crowd for such an amazing show.