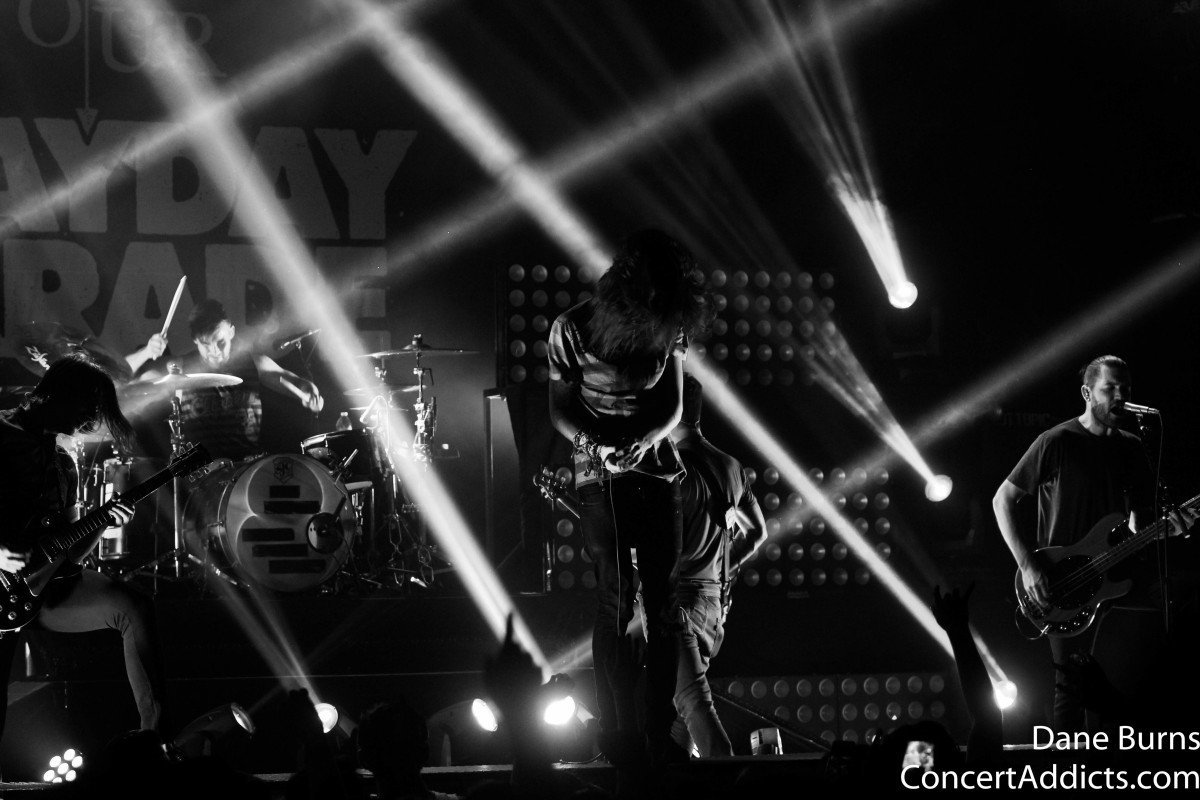 The Alternative Press Tour consists of As It Is, This Wild Life, Real Friends, and Mayday Parade. Thank you to Epitaph and Fearless for this opportunity and putting together a great bill of bands for fans to witness.

Fans were delighted to hear some slow tunes on Thursday night from the acoustic duo This Wild Life. Anthony Del Grosso and Kevin Jordan formed the band in late 2010 and joined Epitaph Records in early 2014. Since joining many touring opportunities came up for TWL. The group returned to Warped Tour for their 3nd time, headlined the UK, played and toured Australia in 2014 as well as got the chance to play Soundwave festival in 2015. Since the release of Clouded and Heartflip This Wild Life has been touring constantly throughout the year; therefore, they often play the same songs on their tour. In contrast to what one may think this strong duo always finds a way to draw in fresh and returning faces with ease for an intimate and moving experience. The bands set consisted of fan favorites such as Sleepwalking (a Bring Me The Horizon cover), Ripped Away, Puppy Love, and No More Bad Days to name a few. Before Jordan and Del Grosso began playing No More Bad Days Jordan explained how the song was for his mother to have hope for no more bad days due to the fact that she was battling cancer and raising kids. After finishing his story Jordan asked that the House of Blues turn off the house lights and that the fans raise their cell phones and lighters in the air in order to light up the room. It was definitely a sight to see. The set was concluded with Concrete and after many fan chants for Del Grosso to “get on the drums” he did just that and played faster than I could shoot. Kudos to This Wild Life for their success this far, they’re only going to get better from here.

Real Friends is an emo rock band from Tinley Park, Illinois that was formed in 2010. Real Friends current line up consists of drummer Brian Blake, bassist Kyle Fasel, guitarist Dave Knox, lead singer Dan Lambton, and guitarist Eric Haines. The group has gained millions of views on YouTube for their popular songs I Don’t Love You Anymore as well as I’ve Given Up On You and have created a large following of fans along the way. Fans who wear their heart on their sleeve and have trouble getting through hardships find solace in the band. This is because RF writes songs based on heartbreak, lonely nights, and questioning one’s every move and more. For Real Friends set the band made sure to play songs that had heartfelt meaning to the fans such as Sixteen, Old Book Loose Ends, Late Nights In My Car, and Summer. During the set lead singer Dan Lambton said “the vibes are fucking real tonight” as fans in the sold out crowd poured out their hearts through song with the band. Lambton also mentioned that he had lost someone close to him around this time of year previously and that it feels like a piece of him is missing. He encouraged fans to refrain from feeling sad about their own lives while they are at the show and to ensure that they have a good time instead because “inside the venue nothing out there matters”. Overall this was a great opening band and can be expected to headline sooner rather than later.

Mayday Parade originated in Tallahassee, Florida with Derek Sanders doing vocals, Jeremy Lenzo playing bass, Alex Garcia on lead guitar, drummer Jake Bundrick, and rhythm guitarist Brooks Betts. The band’s sound is labeled as emo pop-punk/rock due to sharp guitar riffs by Garcia and deep sentimental lyrics by Sanders. Mayday Parade has had many successes throughout their career thus far beginning with selling 50,000 copies of their debut ep Tales Told By Dead Friends in 2006 without a label and now their most recent success came when they released their fifth album Black Lines (2015) and reached number one on Billboard’s Top Rock Album & Alternative Albums chart. The band brought a spark and the crowd lit the fire as Mayday played a majority of songs from Black Lines (One Of Them Will Destroy The Other, Keep In Mind Transmogrification Is A New Technology, Letting Go, Hollow, and Until You’re Big Enough), and A Lesson In Romantics (Jamie All Over, I’d Hate To Be You When People Find Out What This Song Is About, Black Cat, and Miserable At Best) all of which the fans knew every word to and sang along. Before playing Terrible Things off of the Valdosta ep Sanders asked for fans to bring their cell phones out once more before the night was over as the house lights went down. Sanders broke out an acoustic guitar for Terrible Things and I Swear This Time I Mean It and later played the piano for Miserable At Best toward the end of the set. The whole band did a phenomenal job of making the night fun and intimate for each and every fan in attendance.

If this review hasn’t spoken volumes to you, do yourself a favor and see the Alternative Press Tour before it’s over!