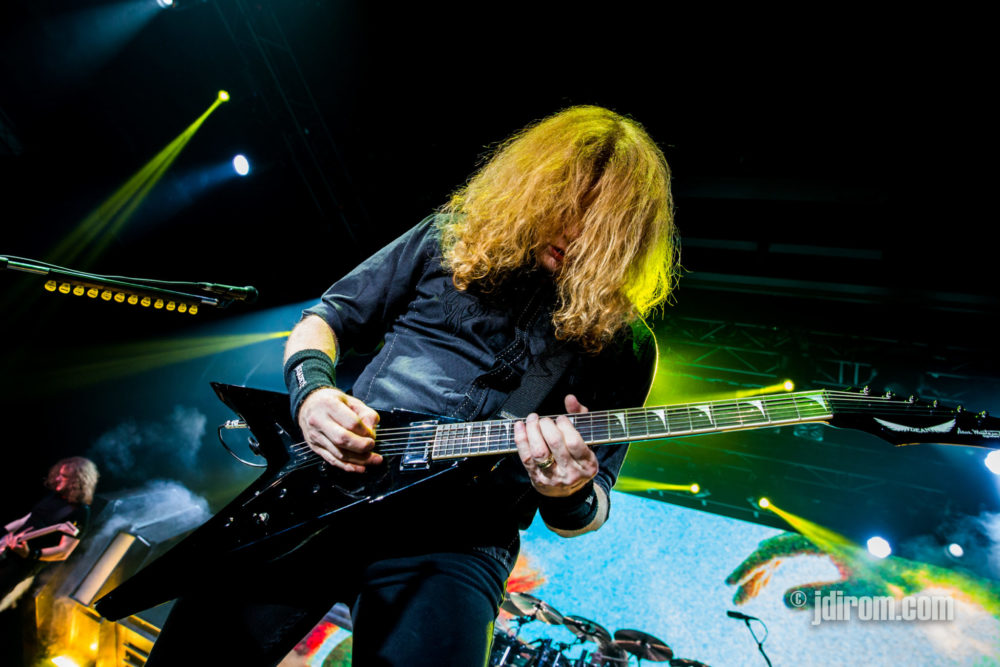 In support of their 15th studio album Dystopia, Megadeath hit the stage. A rhythmic chant of “Megadeath”, alone with legions of funding fists and horns in the air beckoned the band to the stage.A heavy fog filed the stage as monitor high above the stage showed an animated sequence of the robotic construction of the band’s logo being pieced together, and injected with a ecto like ooze.

He strolls through the fog and launches into the first track off the latest album with The Threat is Real. The crowd is intense, pushing forward into the barrier, with their arms in the air. Metal at it’s best. The band has the crowd in the palm of it’s hands, as they hang on each riff, and are mesmerized by the electric wizardry of Mustaine. Enthralled with Mustaine’s playing, one almost missed the elaborate light an video show on the five stage monitors.

The set comprised of songs from throughout Megadeath’s entire discography. While the only The Threat is Real, Dystopia, and Fatal Illusion were the only three song making the set from the bands latest album, the show was packed with fan favourites.

Suicidal Tendencies set the crowd into a frenzy. Muir was high energy throughout the set, as band members moved furiously around the stage. Muir only slowed down on occasion, retreating to the back of the stage, during solos. Full on crowd surfing, and chants of “ST” as the band closed their set with Pledge. Suicidal is a fun high energy band, fuelled by catchy infectious grooves.