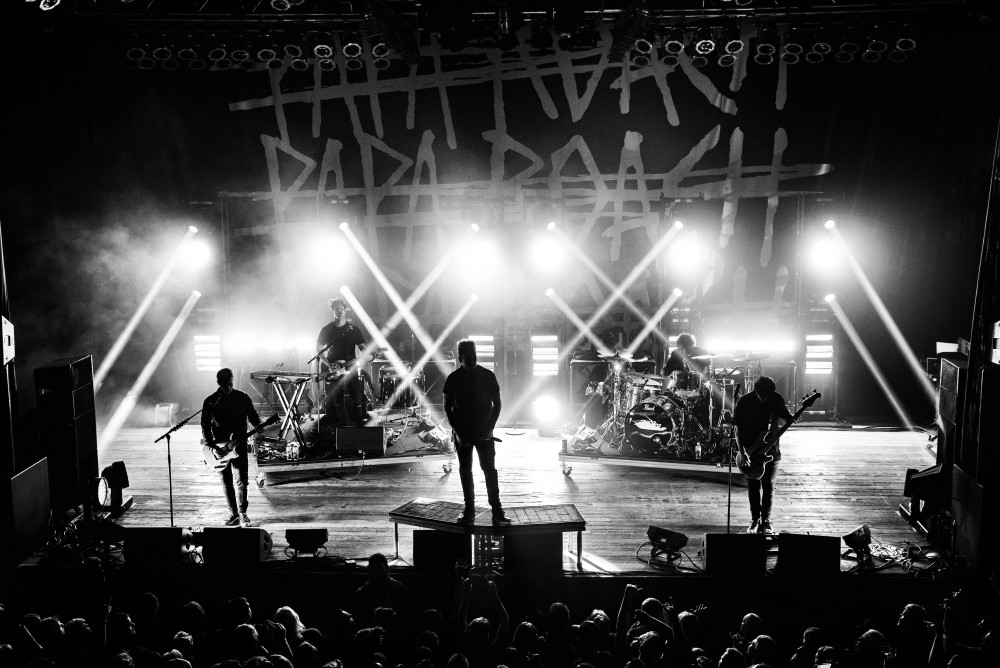 Yet another sold-out crowd flocked to The House of Blues on April 7, excited for hard rock icons Papa Roach to bring the Crooked Teeth tour to Myrtle Beach.  Escape The Fate got the crowd buzzing, their short but powerful set moving the floor early on in the night.  Their performance perfectly set the tone and atmosphere for the following set: Nothing More.

Having seen Nothing More several times in the past (most recently on their headlining run, earlier this spring), I knew we were in for an explosive performance.  Vocalist Jonny Hawkins tore onto the stage with a vengeance to start the set with “Do You Really Want It?”, injecting a new level of intensity into the crowd.   The band leaves nothing to be desired with their stage presence- from aggression in the opening songs, to call and response moments such as those in “Salem”, to tender and longing tracks like “Just Say When” and “Jenny”.  Jenny, specifically, simply drips with emotion that is palpable whenever I hear it.  There’s not a more genuine band in hard rock music today in my eyes, who cover such a wide range of emotions so effectively and honestly throughout the course of a set.  While Nothing More’s monstrous atmosphere had the feeling of a headlining set, the best was still to come.

As the massive curtain blocking the stage fell and the opening chords of “Crooked Teeth” shook the venue, the crowd swelled with excitement.  Thousands belted every word as vocalist Jacoby Shaddix sauntered around the stage, clearly showing he knew how to work a raucous crowd.  As the first track ended, the band wasted no time transitioning into their furious 2006 hit “…To Be Loved”, capitalizing on the peak of energy from the previous track.  Never ceasing the adrenaline, Papa Roach swiftly moved through their catalogue with both classics and new tracks. From the title track to the new record, “Crooked Teeth”, to “Forever” (with a small tribute to the late Chester Bennington) and all the way back to “Getting Away with Murder”,  their performance brought something for new and old fans alike.

Through all the chaos, there was a single respite, a moment of peace. the crowd was silent for “Gravity”- the sound reverberating off the walls and letting us actually listen. While the intensity of the set was infectious, this moment was the truest connection I experienced that night between Papa Roach and their fans.  The set closed with two classics, “Scars” and the PR anthem “Last Resort”.  I couldn’t help but bang my head to the iconic main riff, and the crowd was absolutely manic.  This was the most energetic circle-pitting song of the night by far, and the set ended with an honest moment of connection with the audience. Jacoby Shaddix mounted the barricade steps and let the crowd sing the final words.  That genuine moment proved Papa Roach’s devotion to their fans and was a perfect way to close out the night.