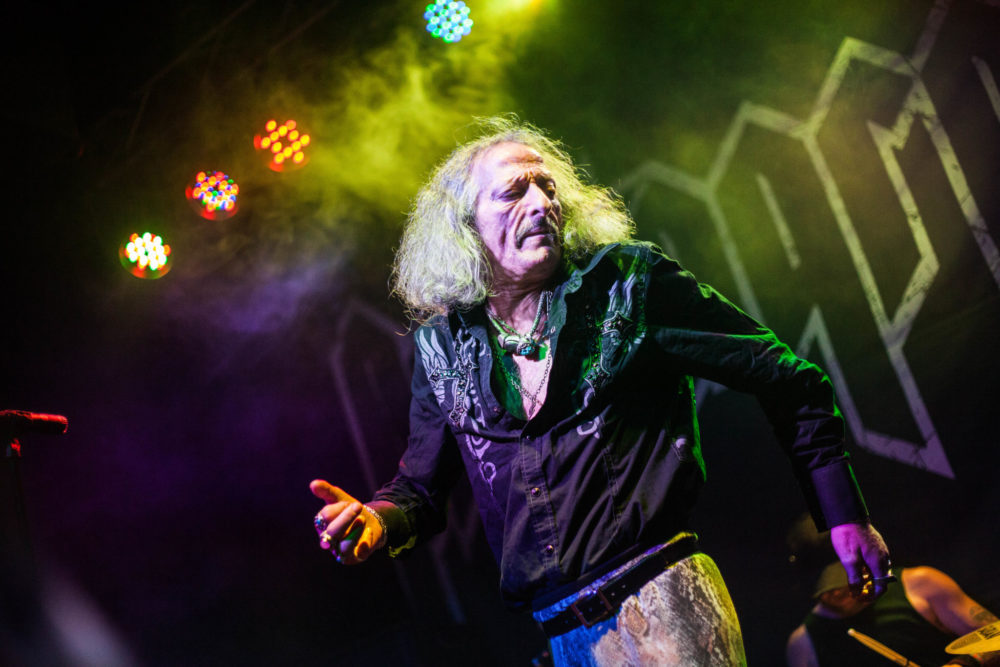 There’s a lot that can be said about a band like Pentagram. A couple things being – ‘I wonder where I can get a pair of snakeskin pants like Bobby Liebling’ and ‘this band sure packs a mighty punch.’ These were, verbatim, the thoughts coursing through my mind when I went to go see Virginia’s own doom metal architects last Thursday night.

Pentagram raided the Observatory’s own Constellation Room with copious amounts of extreme hip-thrusting fury – enough to make every fan in the fun-sized room simultaneously push and shove to try and get as close to the front as possible; and without a doubt, most of those people would succeed. I was indeed one of those people, but instead of coming back with bruises and scrapes, I came back with some shots depicting the whole night of chaos (…and some bruises and scrapes).

Unlike surely close to 95% of the people in the room, I was a novice Pentagram fan. I had heard nary a song by them before seeing them live, so I really didn’t know what to anticipate. All I had to go by were the conversations littered with excitement I overheard from around the room. Once the stage lights dimmed and the last Metallica Kill ‘Em All-era song had run it’s course via the overhead speakers, the band came out one by one, leaving the whole room consumed with animation. The frontman, Bobby, wasted no time getting right to the good stuff, and in between guitar solos would dance around the stage as if he were performing in a festive Mardi Gras parade. They even had the colourful rainbow stage lights to go along with it, too! Meanwhile, the rest of the band members were completely bringing the house down with their unmatched talent and immaculate synchronicity. The guys in Pentagram certainly know how to entertain and deliver, so it’s no surprise they had half of the room in a moshpit before the first song even commenced, and it’s no surprise they were such an anticipated band of the evening.

If I had to describe the show in one word, I don’t think I could. All I can say is, you must go see Pentagram for yourself if you want to be slammed with some genuine doom metal and some groovy dance moves at the same time. You can see all of Pentagram’s upcoming shows here. Thanks for reading and checking out my coverage!