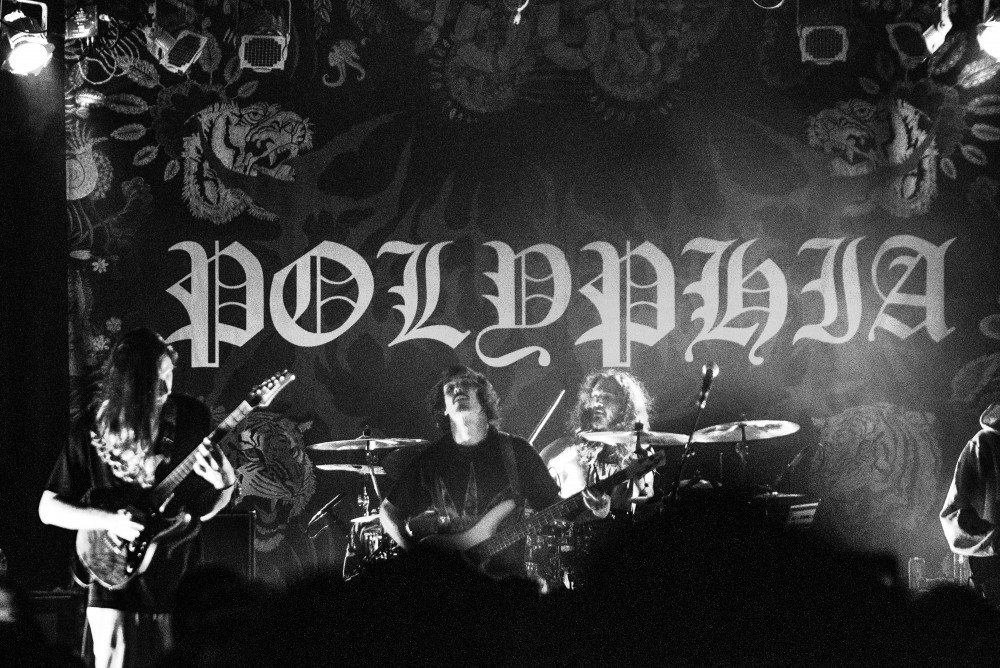 Rapidly rising to prominence in the world of instrumental progressive music, Polyphia  tore through the US this fall with support from Covet + Hail the Sun.  Riding the success of their latest record, “New Levels New Devils”, Polyphia continued to prove they’re not content to stay static musically.  The Dallas based 4-piece continued to innovate, bringing jazz and Latin influences into their sound and morphing into something truly unique.  With such diverse support rounding out the bill, the packed-out crowd in attendance knew they were in for a technical, nuanced sonic rollercoaster of a night.

Covet opened the show, with lead guitarist Yvette Young painting intricate soundscapes with dreamy tapping riffs.  The meandering nature of their performance cast a sort of trance over the crowd.  Every nuance and layer felt purposeful, creating a “story without words” in a sense. The airy guitar lines were accentuated by punchy yet still subtle bass lines, adding yet another voice to the performance.  As a musician, I personally admired the effortless transition between energy, serenity, chaos and peace… all without seeming the least bit forced.  This is one set I wish was given a longer time slot, and I fully intend on visiting their sonic landscapes again.  Live performance is where Covet shines, and this will not be the last time I see them.

Next up was post-hardcore act Hail the Sun.  It’s not very often that having a vocalist makes a band the “odd one out” on a bill, but that was the case on this particular night.  HTS brought blistering, raving punk aggression to balance the tranquility of the previous performance.   Vocalist/drummer Donovan Melero commanded the crowd the entire set, exuding tremendous energy even from behind the drum kit.  The cathartic moshing that persisted throughout their performance set the stage for Polyphia, the entire venue just buzzing with anticipation.

Polyphia finally took the stage to the ominous bell intro of their new single, “G.O.A.T” off of NLND.  Tim Henson, Scottie LePage and Clay Gober slink onto the stage, and as the riff hits the energy of the venue exploded.  The smooth, yet evil groove is infectious, charming even, as Henson and LePage’s dueling verse riffs lead listeners into Gober’s gut-punch bass solo bridge.  That rise and fall is something Polyphia has absolutely perfected on their newest material.  The second song, OD, was another funk-heavy and dissonant acronym track that melded with the energy of GOAT, while introducing an element of chaos.  Polyphia proves that you don’t need words to create moving progressive music.  After the darkness of the first two tracks subsided, the quartet showcased their growth by tearing through older material as well as their previous EP, “The Most Hated”.  The energy from album to album is distinct, and it’s apparent in the crowd response.  Older material inspired moshing, while their latest two offerings were packed with songs you can’t not dance to.  The night culminated (or so we thought) with their epic swansong “Finale”.  Soaring riffs gave the outro an epic, cinematic feel, tremolo flutters aplenty to give the song the uniquely Polyphia flair.  After a brief aside, the band emerged once more to play one of their signature songs, “Euphoria”.  Henson mouthed the words “I’m-the best-at writing f’kin hooks, yeah, nananana…” as he ripped his personal favourite hook he’s written.  The crowd bounced till the last note, the constant energy brought to a head… and finally allowed to settle as the final A note reverberated through the venue.

Polyphia just keeps getting better and better.  The self proclaimed “not only the biggest, but also the best metal band in the world” has nowhere to go but up. After a late November Japan tour, that’s the last we’ll see of polyphia until 2019.  UK headliner tickets are on sale now, dates are below.