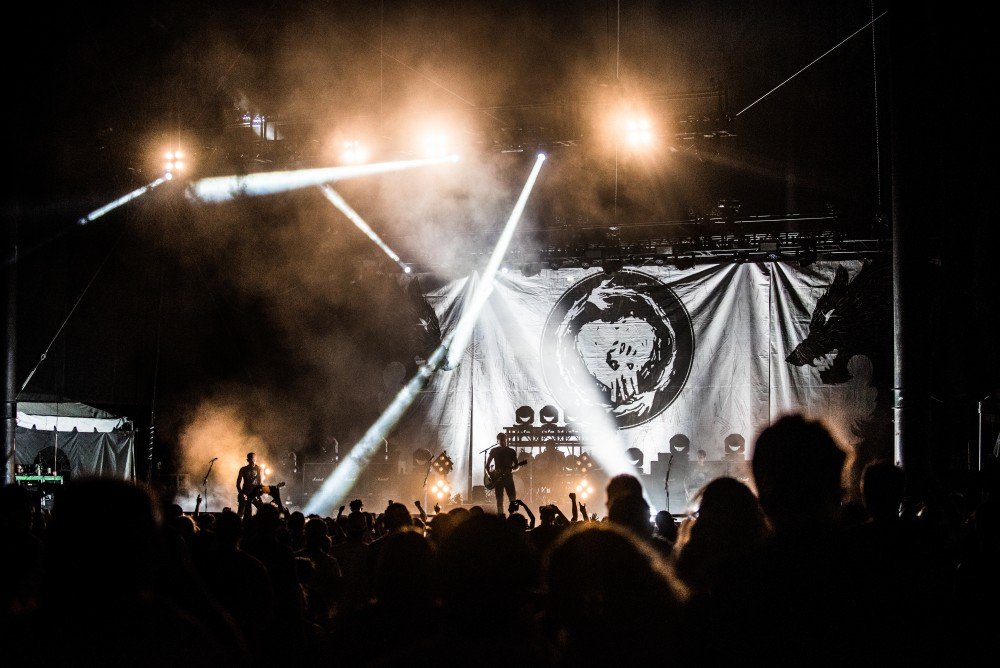 Rise Against rolled through Raleigh, NC on the Mourning in Amerika tour on August 7. With AFI and punk rockers Anti Flag rounding out the bill, this show was bound to be a raucous night.   Anti-flag got the crowd moshing early, the band’s constant leaping off of props onstage passing on contagious energy.  Their energy and passionate lyrics matched their stage presence-aggressive and unapologetically political.

AFI fed off that energy further and built on it.  Vocalist Davey Havok brought a silky swagger to the stage, captivating the crowd with his unique air as a frontman.  The audience went wild for their classic track “Miss Murder”, and AFI set the stage flawlessly for the stars of the night: Rise Against.
Rise Against has consistently been a powerhouse in the punk world since their debut in 1999.  Opening with the first single off their 2017 record “Wolves”, the furious pace began early and carried through the entire set.  The mosh pit spun feverishly, limbs flying driven by the breakneck drum beats.  Vocalist Tim McIlrath acted as a conductor for crowd morale, belting lines at the audience through a megaphone for a fitting track, titled…uh… “Megaphone”.  As the set progressed, McIlrath mounted the barricade to interact with the crowd- passing off the mic to fans and shaking hands with the throng in front of him.

The energy of a heathen’s ritual seemed to come over the mosh pit, and Rise Against only fueled that fire with classics like “Savior” and “Re-education Through Labor”.  The insanity wound to a slow, meandering pace for a four-song acoustic interlude. The echoing intro notes to “Swing Life Away” resounded through the venue and captivated the crowd.   Personally, that track means a lot to me, so finally hearing it in person was a powerful moment I’ll not soon forget.

For the encore, all of the electricity of the performance came to a head with Rise Against’s anthemic “Prayer of the Refugee”.  The pure catharsis of such an aggressive track closed the night on a fitting final note.  As a whole, the night was a perfect blend of highs and lows, pressure and release, intensity and peace.  This was my first time seeing all three bands on the bill, but it surely will not be the last.