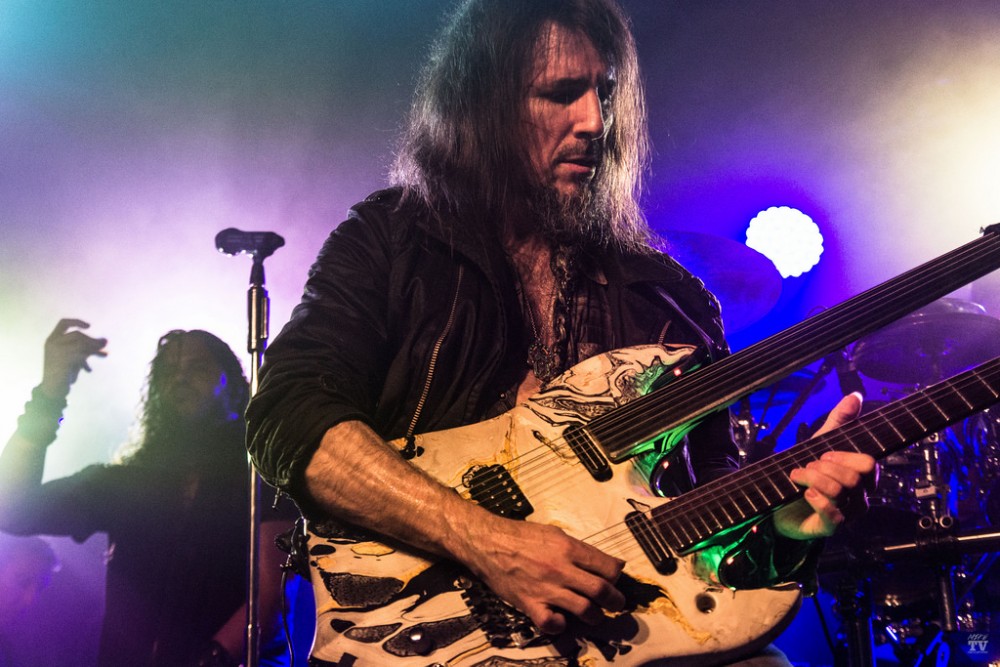 Composed of an incredibly stacked line-up of industry pros from some of the most prolific bands in rock and roll, Sons of Apollo’s performance at Limelight in Belfast felt like opening a Pandora’s box of Prog-Glam-Heavy-Metal history upon an unwitting audience. It was totally cheesy, totally over-the-top and I was unironically revelling in every moment of it!

As lively and exited as the crowd was to be privy to such a close encounter with musical greats, the band was perhaps even more enthused to be playing in Belfast for the very first time. “Better late than never,” proclaimed lead singer Jeff Scott Soto, who owned the stage from the first moment with his gusto. “Why the fuck am I drinking a Heineken? This isn’t Amsterdam,” he continued. “Someone pass me a pint of the black stuff!”

As audience members passed up pints of Guinness throughout the night, the band threw back epic song after epic song—originals from the group’s 2017 album “Psychotic Symphony” as well as Dream Theater covers, instrumental jams, and lots of unexpected aural gems. The genre of the group felt essentially impossible to pin down, with occasional spacey 80s synth vibes and funk-soul organ overtones seamlessly fused with heavy metal riffs. This certainly reflects the ideals of frontman Mike Portnoy of being a multi-dimensional musician by taking influences from many genres and not allowing himself to be fully pinned-down or stereotyped.

And while it was hard to pull my eyes away from Jeff Soto’s theatrical stage-moves—from which Jack Black surely has taken a lesson or two—I couldn’t help but keep coming back to watch this world-class drummer. The smile never once left Portnoy’s face as he banged away, twirling his sticks up in the air and catching them without missing a beat. He just looked like he was having the time of his life. As he popped up from behind his absolute fortress of a drum set to give a wave of appreciation to the audience two songs in, I could feel his sincere passion for this project as the visionary behind it.

How could Portnoy not be smiling when he gets to play music with such a talented band—his so-called “dream team”—who were strongly showcased throughout the evening? Virtuoso bass player Billy Sheehan performed a mind-altering solo, playing up and down the neck like it was a harp and producing a cello-like sound that would be at home in any classical recital. A keyboard solo allowed Derek Sherinian to demonstrate a stunning range that took us from heaven to hell with reverent, hymnal melodies to discordant, bacchanal ones. Former Guns N’ Roses guitarist Ron “Bumblefoot” Thal led the most bad-ass cover of “The Pink Panther Theme” you’ve ever heard. Even Soto took a vocal solo, looping his own voice, which was almost tribal and very stirring.

These musicians could clearly do anything they want, and they chose to come together to form Sons of Apollo. Based on their set tonight, it’s no mystery as to why: because this is fun for them. It’s not pretentious, they don’t take themselves too seriously, and they are having a great time doing the music that they love. When a band is playing for the right reasons like that, it comes across on the stage, and I think that is what made this concert so remarkable and unforgettable.