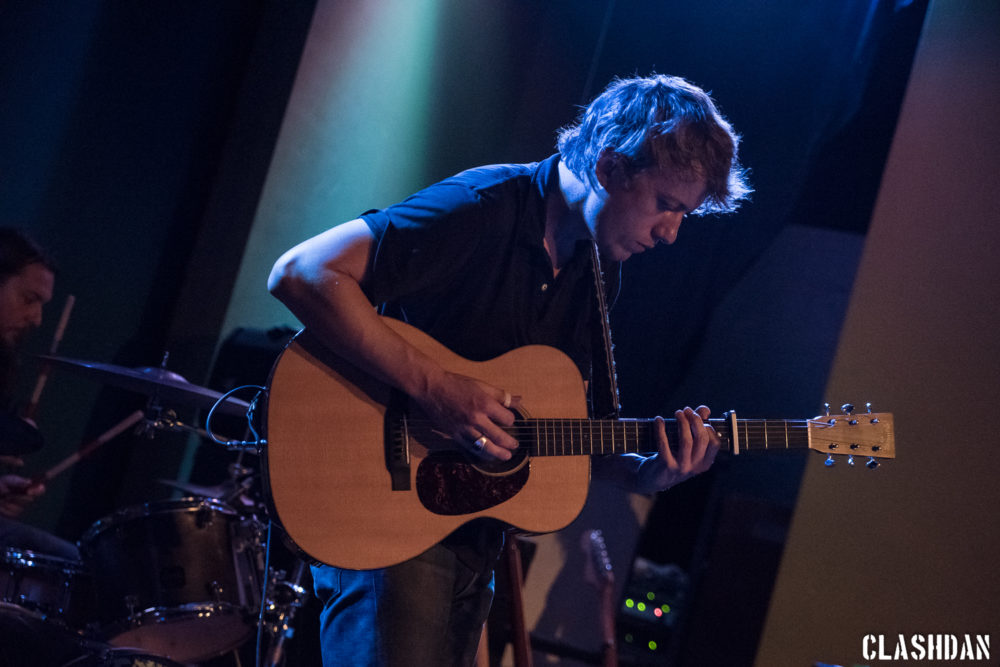 Steve Gunn, the Brooklyn-based guitar slinger and singer-songwriter, recently made his debut on Matador Records with the brilliant new album Eyes On The Lines. Expanding on his past solo and band work, Eyes On The Lines finds Gunn meandering through a set of guitar rock songs that incorporate a variety of styles and influences. Classic rock, slow burning blues, dusty Americana, and psych-pop are channeled into sprawling grooves that showcase his confident guitar work and meditative nature. The album doesn’t turn it’s back on his previous atmospheric folk-rock sound, it simply builds on that foundation, and adds some muscle. Eyes On The Lines is a band album that Gunn honed over lots of touring before hitting the studio, so it seems appropriate that he would head back out on the road to play the new songs the way they were created.

Gunn has always exuded a smoldering power and quiet confidence on stage. His recent show at Kings in Raleigh was no exception. The room was filled with anticipation as Gunn took the stage. Joined by James Elkington on pedal steel and guitar, the band delivered an understated yet captivating performance that touched on both new songs and assorted fan favorites. Noted for his hypnotic fingerpicking guitar style and rich vocals, Gunn has expanded into a bolder and more accessible direction. Songs like Eyes On The Lines opening track “Ancient Jules,” were performed with a bit more momentum and energy. The riffs were in abundance, and songs often meandered into extended grooves. The show was a varied journey sprinkled with laid-back folk charm, bursting guitar runs, and a sunny enthusiasm. Steve Gunn was neither flashy nor overly elaborate, but managed to deliver a uniquely engaging and energetic performance.

Opening the evening was newly Asheville-based The Dead Tongues. The Dead Tongues is a project of singer-songwriter Ryan Gustafson. For this performance, Gustafson performed solo sitting in a chair at the center of the stage. Swapping between banjo picking and acoustic guitar, he delivered a set of folk and country rock songs steeped in Southern charm. Gustafson was followed by Philadelphia lo-fi psychedelic rockers, Spacin’. Led by Jason Killinger, Spacin’ rambled though a slab of fuzzy acid-tinged songs that married golden hooks with hypnotic solos and thudding drums in a murky slab of noise that would make the Velvet Underground smile with approval.