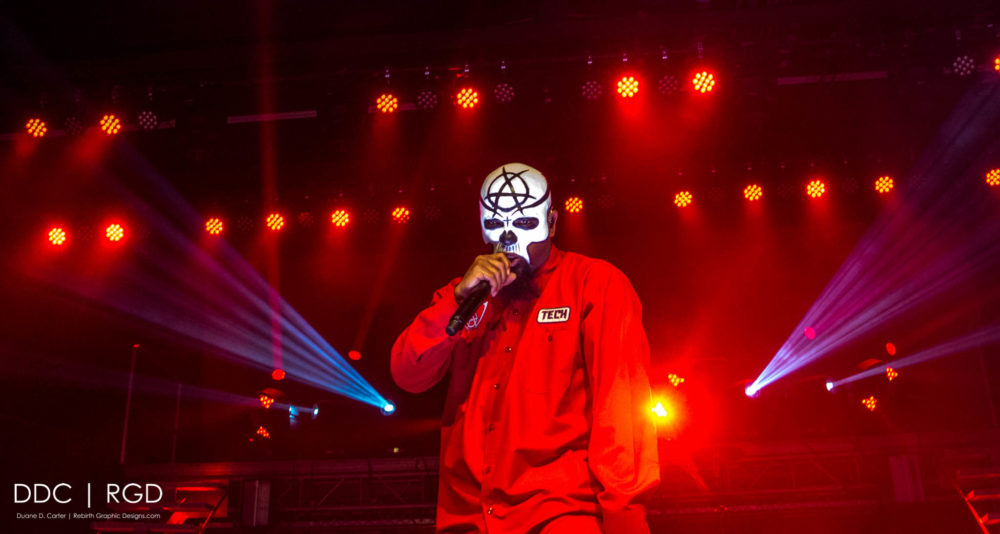 Now I’ve heard about this guy TECH N9NE but never listened to his music, but I knew he was a big deal.

So when I got the opportunity to shoot Strange Music show the other day and was super surprised at the line to get in the Marquee Theatre in Tempe AZ.

I made my way down to the crowd to get set up and when I look around at the crowd, WOW! Face painted, hair dyed, pierced things…I thought he was a rapper?? Now I heard a few of his collaborations before and he’d done stuff with 2 Chains, B.O.B etc, so one of the security guards I just met said, “Oh! You just wait until he gets on stage”.

Before that can happen I get to hear from CES CRU, STEVIE STONE, & RITTZ, none of which I was familiar with. The crowd sure as hell knew them and was singing word for word.

They lost their collective minds once the lights went out and the smoke machines went off.

Strobes lights flashing, blinding whom ever dared to stare in it’s direction and a dark eerie voice boomed!

TECH appears on top of the pull pit to begin his sermon. Again WOW! One of the best rap shows I’ve seen, I mean the guy had a presence. A few super fans started to climb over one another (crowd surfing if you wanna call it that) to get to the stage.

I was just started to get into it when security tapped me on the back, and held up 3 fingers.

GOSH! Who the f$%k made this rule up 3 songs then out?