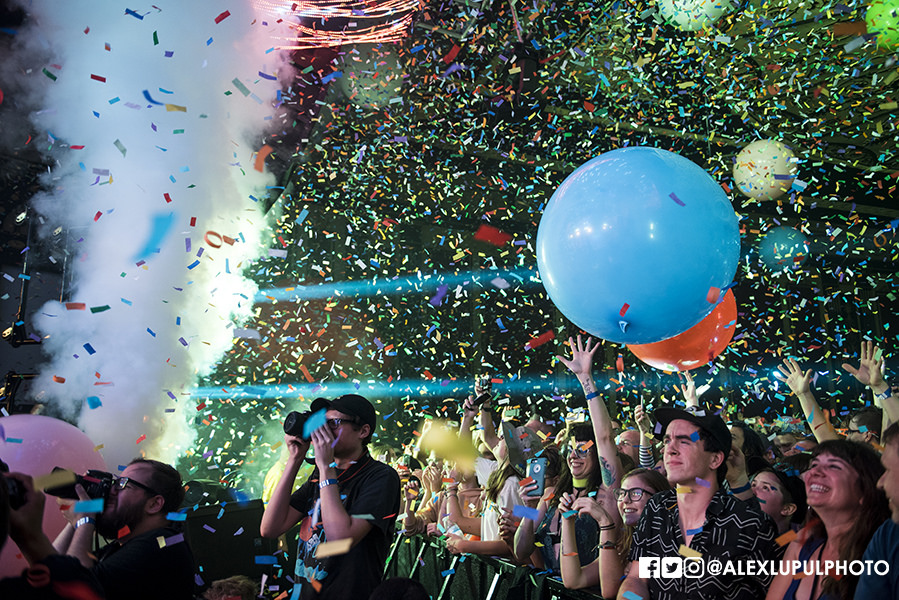 The Flaming Lips made a stop in Niagara Falls, NY on September 20th, bringing a scheduled “There Should Be Unicorns Tour” date to The Rapids Theatre.

For decades the Oklahoma City, Oklahoma collective have been renowned for their elaborate stage shows and costumes, something that seems to have been excitedly carried over by their fans.

During my walk towards the entrance, I passed the long line-up of fans patiently waiting to enter the venue, which stretched all the way around the side of the building. I couldn’t help but notice some of the fans donning elaborate neon-coloured costumes, which made them resemble something more otherworldly or extraterrestrial than your average concert would require.

A large contingent of fans were also excited to see Canadian singer-songwriter Mac Demarco, touring behind his 2017 release “This Old Dog,” whose swirling dreamlike indie-rock sounds earned him a Polaris Music Prize nomination.

While not featuring a stage show as elaborate as his friends in The Flaming Lips, Demarco’s live shows have been known for their light-hearted and random nature, particularly due to his interactions with his audience.

From my spot in between the stage and the barricade, I was nearly pelted by one of the cigarettes thrown from the crowd to the stage. This seemed oddly fitting considering Demarco’s affinity for them, as seen through his promotional photos (which show him being showered by cigarettes, as well as being submerged in a bathtub filled with them) and through the title of his song “Ode to Viceroy.”

The concert continued with Demarco inviting a 17-year-old fan onstage, where Demarco and his band serenaded him with a rendition of “Happy Birthday” to celebrate the occasion. Thereafter, the fan requested an autograph from the singer-songwriter, handing him a permanent marker. With nothing on-hand to sign, the fan pulled the backside of his pants down to provide some space for a signature. Marker in hand, Demarco gladly obliged and scrawled out his signature.

Shortly following the conclusion of Demarco’s set, The Flaming Lips took to the stage with the level of theatrics one would expect from the psychedelic pop band. Lead-singer Wayne Coyne donned a bright red suit, dollar-sign chain, black eye mask and pink Nike Airs, a subdued look by the bandleader’s standards.

Within the first two songs the crowd and stage were showered by a brightly coloured downpour of confetti, emphasized by the jets of smoke shot from both sides of the stage. Simultaneously balloons, too large to wrap your arms around, spilled from the rafters and onto the audience. The balloons added spots of colour in the historic 1920’s theatre while they were thrown into the air by audience members, dancing to and fro as they bounced around the venue.

Throughout the rest of their set the band provided enough showmanship to turn this concert into a full-blown spectacle. It continued with Coyne raising a series of golden letter balloons above his head. The lettering measured close to 10-feet high, spelling out “FUCK YEAH NIAGARA FALLS,” a custom that’s carried over to each Flaming Lips concert, with the location changing depending upon which city they’re performing in.

During their performance of “Yoshimi Battles the Pink Robots, Pt. 1” a 20-foot-tall pink inflatable robot expanded in between the stage and the crowd. It continued to expand until it towered over the entire production, a sight that left audience members smiling from ear to ear.

The “There Should Be Unicorns Tour” proved to be aptly titled, as Coyne and company performed the track of the same name from their 2017 release “Oczy Mlody.” After making a quick costume change that featured inflatable angel wings, the lead-singer hopped onto a full-sized unicorn prop, rigged with lights, which he rode through the crowd until the conclusion of the song.

Even the act of crowd-surfing is done in a unique way, true to The Flaming Lips’ signature style. During their cover of David Bowie’s classic song “Space Oddity” Coyne entered a giant transparent ball, traversing the crowd in a fashion reminiscent of a hamster in a hamster ball.

All things considered, without photographic evidence it might be difficult for others to believe you saw a unicorn at a concert. But it’s through these moments that the band’s consistent love for the unique and unexpected are showcased, and are exactly what makes a Flaming Lips concert both effortlessly enjoyable and entirely unforgettable. This is one concert you really shouldn’t miss.