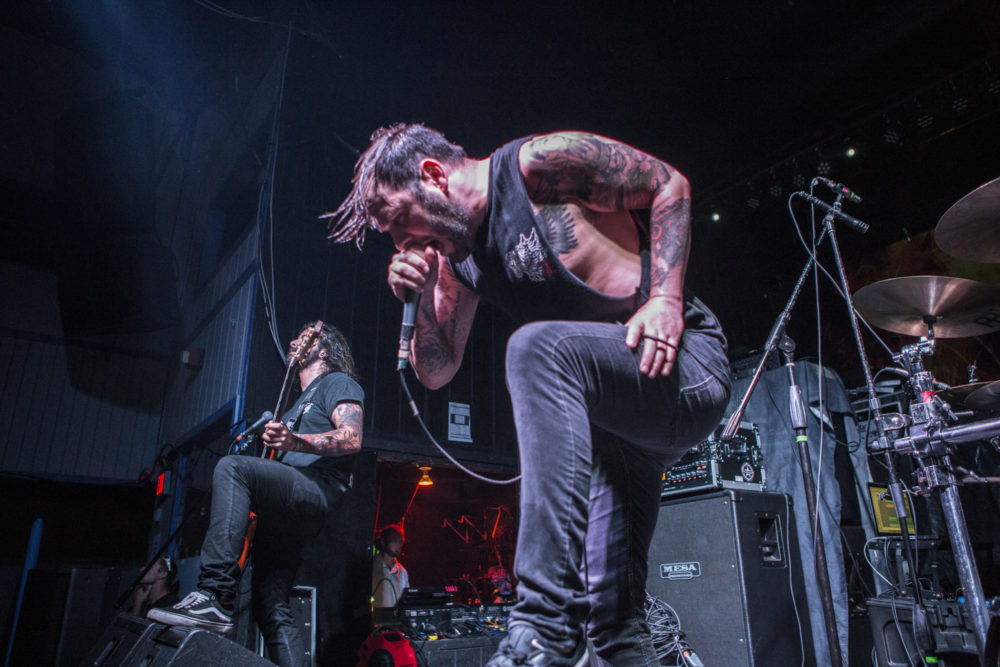 This year’s rendition of Summer Slaughter was geared to amaze.  While previous years had proggier roots, 2016’s festival was 12 bands of unrelenting brutality.  From the get-go, Ingested brought incredible stage presence and intensity-even more impressive as an early band.  At the end of their set, Jay Evans (Vocals) hopped the barrier and screamed inches from the crowd- a hell of a way to hype up the crowd for the rest of the day.  Slaughter to Prevail followed, bringing Russian roots to deathcore.  The initial anonymity of Alex Terrible’s horned mask also gave a unique tone to his vocals- remarkably clear, but still muffled- with somehow amplified and deeper lows. I had actually recognized him from his YouTube covers of Meshuggah that he posted several years back- and was floored that an originally YouTube artist had made it all the way to Summer Slaughter.   Revocation brought us the first taste of tech-death for the night.  Blistering speed coupled with a harsh mid to high vocal timbre made for a traditional tech-death set.

Carnifex brought a blood-soaked macabre take on deathcore, including the single off their new record, ‘Drown Me in Blood’.  Leather and spikes added to the ambiencce of their performance. Following them was Suffocation- an old-school and charismatic take on Death Metal.   Their vocalist behaved rather strangely for his genre, albeit in a good way-he’d bob his head and dance like he wasn’t on stage at a death metal show.  It was strange yet interesting, and added a unique quality of nonchalance to their set.  After the Burial was the only non- DM or deathcore band on the bill, and they sure delivered.  They opened with ‘Lost in the Static’, a hit off their latest record ‘Dig Deep’.  The distinct 0-0000-0000—0000-0000-0000-0000-0 intro riff drove the venue wild.  The moshing was intense for this set, some of the heaviest I’d seen all day.  It was good to see these guys back touring after the tragic death of their guitarist, Justin Lowe, last year that made them pull all of their tour dates.  The recognizable ‘Djent’ style of ATB was unique for this festival, and introduced some much needed groove.

The crowd had some time to recover, though, as there was an extensive soundcheck for George Kollias of Nile’s monster drum kit.  After what seemed like ages, Nile proceeded to melt faces with blistering double bass only Kollias could deliver. The different vocal styles of Nile’s two guitarists complemented each other nicely, but were distinct enough to offer two different deliveries throughout a song.  Finally, the headliner,  Cannibal Corpse.  No band can deliver the crushing vocal onslaught and ferocious full-body headbanging like George ‘Corpsegrinder’ Fisher.  Cannibal corpse proved to me why they are rightfully the prototype for Death Metal bands- every member is so completely in time, making for a wall of sound like no other.  And to top it off, Corpsegrinder plays NO games.  He stands in one spot and either screams at you with his mass of hair over his face, or headbangs with such intensity that any normal neck would snap.  They were the rightful conclusion to such a brutally heavy day of metal.