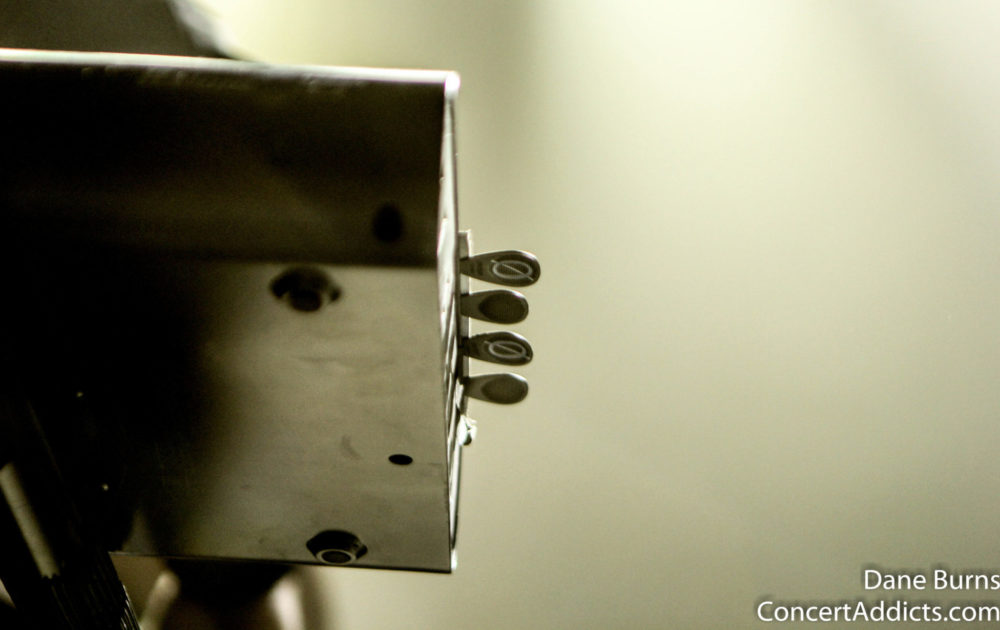 After a two-year hiatus Underoath decided to make a return to the spotlight and boy did Los Angeles miss these lads. Fans were lined up outside the venue and later led onto the escalators in groups to prevent longer lines for security which only raised the fans anxious feelings to get inside quicker for a better spot. Once inside I heard a few gentlemen in the bathroom discussing how they were going to hop the rails (which separated the main floor from the upper levels) to be able to mosh during the bands set and that there was no way they were going to miss it. I could tell this night was going to be rowdy and that’s exactly how it went.

Underoath jump started their set with Young and Aspiring which is Underoath’s first track from They’re Only Chasing Safety. The band came out with a ball of energy jumping and flying all across the stage while fans went wild and sang along with lead singer Spencer Chamberlain and opened up the most pit for their own pleasure. Needless to say the mosh pit continued for the whole set while people consistently joined in, others looked for a way out as that wasn’t their cup of tea. During the set Chamberlain explained that the band felt bad for not stopping in Los Angeles on their farewell tour and that they wanted to make up for it by adding a “secret show” to their reunion tour. The crowd clearly forgave Chamberlain and the rest of his crew as the audience sold out the entire Fonda Theater which led Underoath to make a change to their venue choice to The Nova which also became sold out according to a crew member from The Nova. Underoath not only played fan favorite album They’re Only Chasing Safety in its entirety, but also Define The Great Line. Some notable moments from the show were Chamberlain joining the crowd for some vocals during Writing On The Walls, guitarist Tim McTague’s never ending smile and energy, as well as Christopher Dudleys very passionate expressions throughout the show as he consistently leaned over his keys, jumped, and made a riot during what I’m sure was the time of his life. Unfortunately, there was no encore for the crowd as requested by the fans loud screams, but that doesn’t mean the fans left unsatisfied. Many crowd members had the chance to relive their high school years and older memories from previous Underoath shows which was a more than overwhelming experience.

If Underoath and Caspian is coming to a city near you make sure to pick up a ticket for you and a friend because they will sell out quickly.

I would also like to extend a special thank you to the following people: Lindsay Bailey, Tyler Soucy, and Monica Seide for helping me acquire a ticket and a photo pass for Caspian and Underoath on short notice.

Caspian was the only opening band for Underoath at Sundays show. Below is a brief overview of the bands musical success:

After originally forming in Beverly, Massachusetts in 2003 and playing small gigs instrumental rock group Caspian prepared their first demo in 2004 that was later released in 2005 titled You Are the Conductor under the label Dopamine Records. Over the course of the next 10 years Caspian produced five albums their most recent titled Dust and Disquiet in 2015, and six ep’s the latest being Hymn For The Greatest Generation.

Now for a review of Caspian’s live performance:

“Go all the way” began Tom O’ Bedlam’s voice looming over the awaiting crowd. O’ Bedlam was reading a poem written by Charles Bukowski titled “Roll The Dice”. “If you’re going to try, go all the way. this could mean losing girlfriends, wives, relatives, jobs and maybe your mind.” I couldn’t focus on the concert at this point, I didn’t think of the crowd, my camera, my jobs, my home, my bills, my family. I thought of myself and this life I pursue as not only a “Concert Addict”, but a concert photographer. Would I be willing to not eat for 3 to 4 days, to be freezing on a park bench, or even face isolation? These questions had my mind racing. What am I doing with my life to further it and will I go all the way? The answer: yes. So, before I dig into Caspian’s set I would like to thank them for the beautiful choice of opening content that I’m sure made everyone examine their lives for just a moment.

Following Bukowski’s poem came the intro to Caspian’s first song Darkfield from Dust and Disquiet. While Caspian played I couldn’t help but think of the quote “a picture is worth a thousand words”. The reason for this is because here is a band that is not utilizing vocals, but instead using their instruments to speak for them. Allowing the crowd to feel and sense the vibes given off from the stage and the lighting that illuminates the band. Caspian displays a sound that makes you feel as if you are canoeing down a river only to be turned around spinning out of control and then back to your regular pace. It’s a sound and a feeling that can’t be described in many ways. But I feel a sense of hope and even joy when listening to the groups music. During the show Caspian remained humble despite their heightened popularity over the years by thanking the fans a few times throughout their set for showing up early and allowing the band to play not only for Underoath, but for the folks in the crowd. Though the bands entire set was impressive, what really intrigued me about Caspian’s performance was their ending. While playing Sycamore each member in a varying pattern stopped playing their instrument, put it down, picked up a pair of drumsticks and began playing in sequence with the drummer (Joe Vickers) and each other. True talent on behalf of the band.