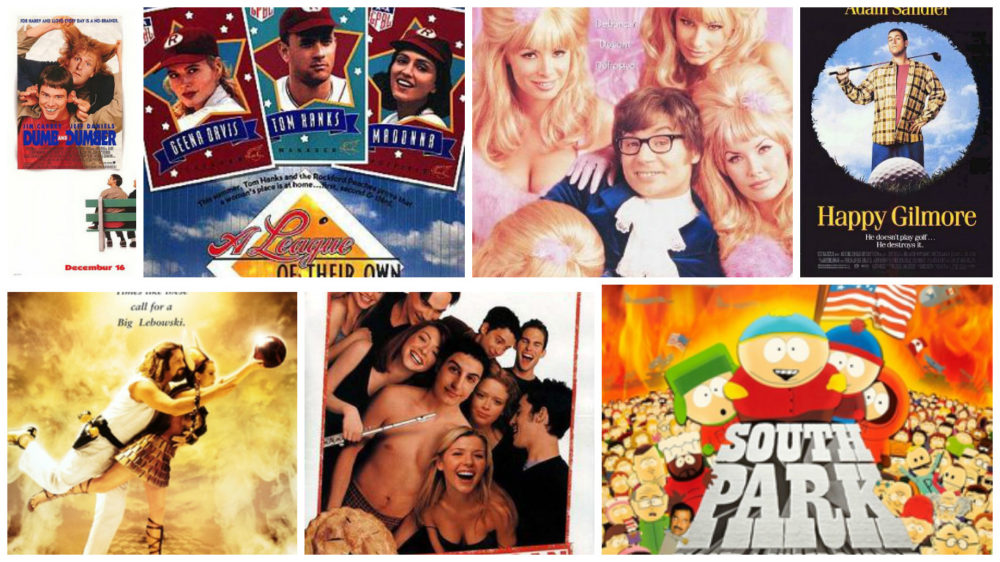 The further we drift away from the ‘90s, the more the decade begins to take shape in our memories. It’s always difficult to pinpoint the terminology to describe the atmosphere of a chapter in history, but by now a lot of people in the millennial generation and up can recognize that special intangible something that’s quintessentially ‘90s.

And as far as I’m concerned, there’s not much that tops a distinctively ‘90s-flavored comedy. So just for fun, I went back through a bunch of them and worked out my list of the top 10 comedies from this glorious decade.

I’m still not sure there’s been a funnier comedy made since 1994. The offbeat chemistry between Lloyd (Carrey) and Harry (Daniels) made for a memorable, endearing, and endlessly quotable romp of idiocy. I confess I haven’t been able to bring myself to watch the sequel, but for those interested it’s currently up as one of HBO Go’s streaming options.

This is always a strange movie to look back on, because somehow it’s achieved cult classic and all-time great status at the same time, and those ought to be mutually exclusive distinctions. Whatever the case, if you had the patience to wade through a bit of Coen brothers weirdness, you probably fell in love with this film 18 years ago. The Dude (Jeff Bridges) is an icon, but it doesn’t get much funnier than Walter Sobchak (John Goodman).

Written and directed by the unrivaled Mike Judge, Office Space was one of the unlikeliest comedy hits in recent history. It’s a drab, miserable tale depicted by a handful of actors who, frankly, never did much else (with the exceptions of Gary Cole and Jennifer Aniston). Yet it was hilarious from beginning to end, capturing the monotony of nine-to-five work in a way that’s more realistic than most of us want to admit.

He’s fallen off a little bit in the comedy world, and has certainly produced a few duds over the years, but what an incredible performance this was by Mike Myers. The guy played the hero and villain in the best James Bond parody of all time, and one of the funniest comedies of the last 30 years.

This goofy film wasn’t quite Dumb And Dumber (to me), but it may have been an even greater exhibition of Carrey’s unique talents. And it’s also easy to appreciate that it was largely left alone, with a sequel soon after its release but no modern reboot or 20-years-later sequel in the works. The film did pop up recently as inspiration for a game within a hub of similarly licensed titles, but that’s more an homage to the original than anything else. Using the image of Carrey from the film, the game is a real money arcade with animal-based slot reels and wacky free bonus games that capture the spirit of the movie.

It’s hard to believe now, but there was a time when Adam Sandler was on fire. His crude, over-the-top brand of humor worked well in his youth and led to a run of pretty well-liked comedies including Billy Madison, Big Daddy, The Waterboy, and The Wedding Singer. But Happy Gilmore is hands down his funniest film. It’s all in the hips.

It’s amazing that this animated comedy came out 17 years ago, but it speaks to the comedic genius of Matt Stone and Trey Parker that all these years later, South Park is as popular as ever. The only shame is that they haven’t made a cinematic sequel. Instead, they’ve poured their extra energy into a Broadway hit (The Book Of Mormon) and a video game that was basically an extension of the show. And according to a behind-the-scenes look, the sequel to that game will be out in early 2017!

Probably the defining teen comedy of a generation, American Pie hilariously captured three primary concerns of the American high school student: get laid, party, and figure out what it means to graduate high school. Plus, it introduced us to the Mrs. Robinson of a new generation: Stifler’s Mom.

Another late-‘90s comedy that nailed the concerns of the American teenager, this one did it with a little more heart and sans and R-rating. But it arguably had a cleverer brand of humor than most movies on this list, and it’s hard not to fall in love with the likes of Cat Stratford (Julia Stiles) or Patrick Verona (Heath Ledger). If you brushed over this movie 17 years ago, I highly recommend watching it again—it’s funnier than you remember.

Part period piece, part sports drama, A League Of Their Own is not as much of a full-fledged comedy as most of the other films on this list. But Tom Hanks’s portrayal of ex-MLB star-turned-drunken manager Jimmy Dugan has an argument as the best comedic character of the decade. Plus he coined the phrase “there’s no crying in baseball,” and that’s worth something!