It shouldn’t come as a shock that the machine that is Hollywood is designed to print money.

The decision process studios go through in deciding which films or tv shows to back usually comes after a lot of number crunching to see if they would expect to turn a profit.

This means that when it comes to sure things, the industry tends to jump all over them and drain them for every last drop they can.

One of the best ways to get a large audience to check out a new project without having to be that creative is to rehash an old popular idea.

This leads us into the current state we are in now, where reboots, remakes, and long-overdue story continuations are flooding the market place.

I would like to say, preemptively, that I am not completely against these types of productions taking place. When they are done properly, they can have magnificent results. The problem, as I see it, is that the people that are, or have been, doing it right are spilling blood in the water and it’s causing the money-hungry sharks to circle looking for a taste.

In that last 8 years we have seen a lot of popular eighties and nineties franchises being refreshed with new films; such classics as Total Recall, Fright Night, Robocop, Poltergeist, Teenage Mutant Ninja Turtles, A Nightmare On Elm Street, Full House, Friday The 13th, Fame, Vacation, Dumb and Dumber, 21 Jump Street, The Thing, The Karate Kid, Day Of The Dead, Footloose, The Fog, Arthur, Miami Vice, April Fool’s Day, The Dukes Of Hazzard, The A-Team, My Bloody Valentine, Red Dawn, Maniac, Annie, Prom night, Carrie, Evil Dead, Jurassic Park, Mad Max, Point Break, The X-Files, Funny Games, 12 Monkeys, Psycho, and the list goes on and on. If you have seen any of these revisits and also seen the originals for comparison, you know that contained within are a few really well done remakes/reboots/refreshes, a few really horrible ones, but the majority are just middle of the road crap.

Lets look at an example of the good, the bad, and the ugly. 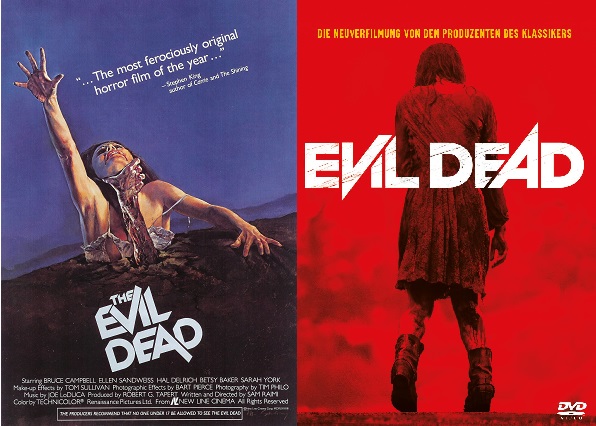 The original directed by Sam Raimi, is one of the most unique horror films ever put forth. The script, cinematography, acting, and special effects each add to this complete masterpiece of a film. The end result is campy and cheesy, but at the same time it still ends up feeling truly scary.
The reboot, directed by Fede Alvarez, breathed new life into the franchise. The film was brutal and bloody, delivering intense visuals that burned themselves into the viewers mind. It was completely different than the original, but took big chances that paid off, allowing the movie to stand out on its own against the original.
Most fans of horror movies could watch either installment and walk away with having had a positive experience. 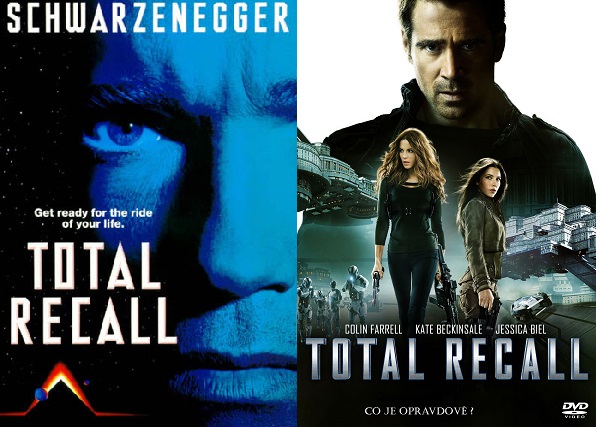 The original, directed by Paul Verhoeven, earns its place high within the ranks of science-fiction action films with its unique story, creative characters, and perfect casting of Arnold Schwarzenegger as the lead. The way the film focuses on the seedy underbelly of the Martian planet allows exploration into the characters contained within that world. The heavy use of practical effects added to the final product, and end up making the scenes seem warmer because of the human touch. By the end the viewer has been exposed to something completely rare and entertaining.
The reboot, directed by Len Wiseman, in itself is not a terrible movie. It took the same story, with a few modifications, and tried to deliver something more futuristic. The visuals of the film rely on CGI to do the heavy lifting. The final product is a cold and humanless level of visual art, and a film that feels more like a Blade Runner meets Minority Report amalgamation than anything else, but it is important to note that this film took chances. Even though most of them didn’t pay off, it did try to reinvent the film and that is what a reboot should do. They would have been better off making a few more changes to the script, and changing the name of this movie. On its own it is a decent enough action movie, but compared to the original it is undeniably inferior. 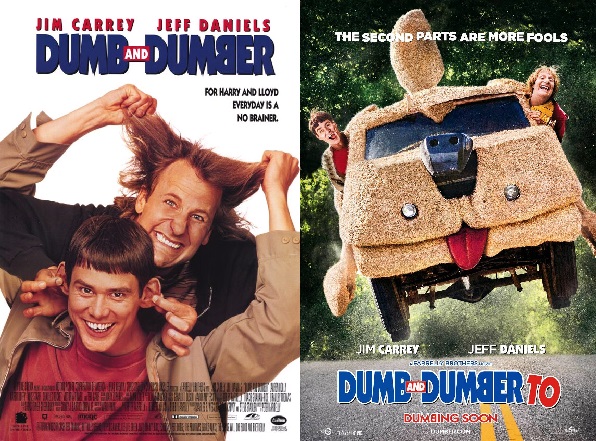 The original, written and directed by the Farrelly Brothers, was one of the funniest movies to come out of the nineties. The production saw Jim Carrey in his prime, cast in a role that seemed custom fit for his incredible energy and hilarious antics. Take in to account the Farrelly Brothers’ writing, Jeff Daniels’ uproarious co-starring role, and the perfect soundtrack, this movie just feels good to watch.
The long-overdue sequel, also directed by the Farrelly Brothers, was a simple cash grab. They took the plot points and funny moments of the original and laid them over a different story and new batch of characters, making the film feel formulaic and overall uninspired. You can literally take jokes from the original, and see how they rehashed them to fit the new story. It was just ugly to watch, and very disheartening. By the end of the film you are just left with a bad taste in your mouth. This is a perfect example of when a reboot/remake/long-overdue sequel should not be made. It wasn’t made for any good reasons. It was made because they knew they could make money off the nostalgia factor.

The sad fact about these three different examples, is that the ugliest one raked in the largest net profit.

The studios look at data like this, and start digging for other films to “refresh”.

Hence the state the industry is in right now.

One movie about to be released that seems to prove this point is Ghostbusters [2016]. They released a trailer a few weeks back, and it highlights just how average the film should be.

One would imagine the conversation when planning out this production went something like this:

Pitchman: So we want to reboot the Ghostbusters franchise.
Studio: Cool, cool, cool! Well everyone is rebooting everything lately, what can we do to refresh this whole reboot idea and make it feel totally original.
Pitchman: Well, in the original it was four men out saving the world. What if…and just wait to hear this out…what if we made the four leads in our movie all female?
Studio: Whoa! You are blowing my mind. This is groundbreaking stuff. But what else, there needs to be more.
Pitchman: Okay, okay. Well in the original they had this female receptionist, what if we switch that up and set that role to be played by a male?
Studio: Holy shit! Are you kidding me? This is going to be the best movie we have ever made! Here’s $154 million dollars, you go out and make the best damn movie of your life.

Even through it is refreshing to see a film of this magnitude get made with all female leads, in the end did it really need to be that way. Does the fact that the four main characters are women help the story at all? I highly doubt it. It just seems like these choices were made to spice things up.

The original film was a delicate balance of suspense, horror, comedy, and drama. Comedy was injected throughout, but the film always manages to take itself seriously. The cinematography is wonderful, the acting is fantastic, and each character is well rounded.

The trailer for this new movie just makes it feel like every other new age comedy of the last few years. It looks like the film is one long Saturday Night Live skit, and that has nothing to do with the fact that three of the main characters are from SNL. It has to do with the way they wrote the scenes, and how the humor seems to be ad-libbed by the actors. This is just too commonplace these days, and since it is common it doesn’t make this film feel special or different from any other recent comedy. It feels like another middle-of-the-road funny movie that just happens to have ghosts being busted in it. It’s watered down crap, and I am tired of it.

So here is my plea:

Hollywood, unless you can commit to making an effort in all future revisits to popular film franchises, please leave them alone. You are diluting what made them special in the first place. Sincerely, a movie nerd.