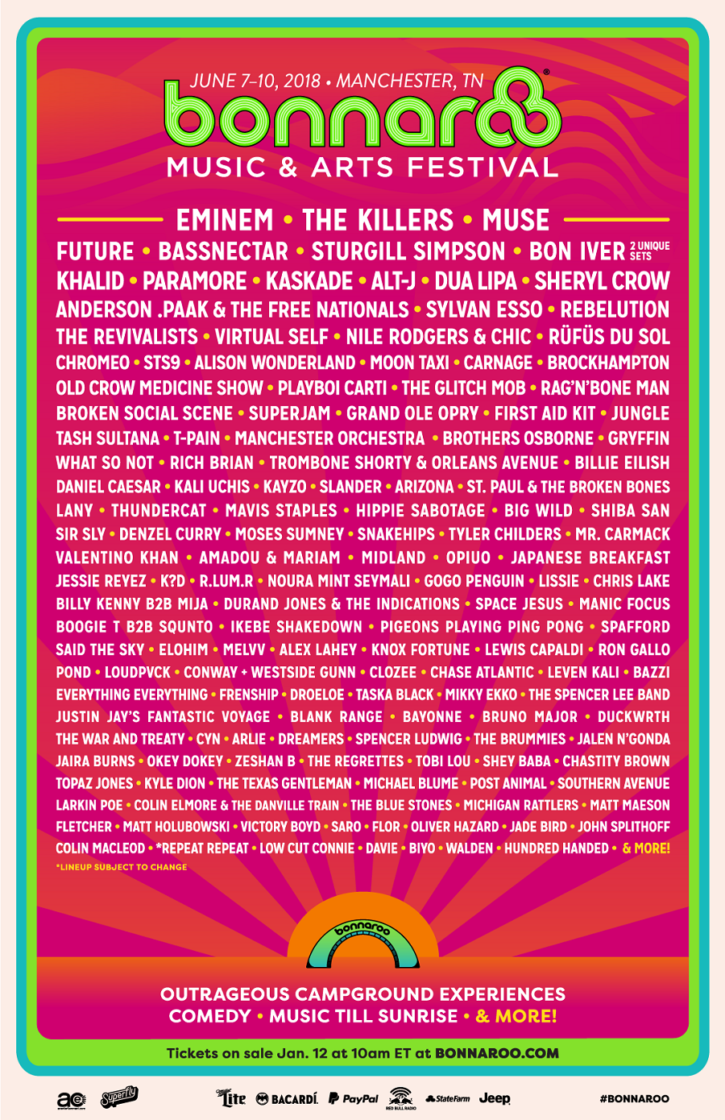 Superfly and A.C. Entertainment are proud to unveil the initial artist lineup for the 2018 Bonnaroo Music and Arts Festival. This year’s edition of the world-renowned four-day multi-stage camping festival will showcase over 150 artists, Bonnaroo will take place June 7 – 10, on “The Farm” at Great Stage Park, the spectacular 700-acre event space located 60 miles southeast of Nashville in Manchester, TN. All tickets go on sale this Friday, January 12 at 10am ET, exclusively via www.bonnaroo.com.

Hailed by Rolling Stone as one of the “50 Moments That Changed The History of Rock ‘n’ Roll,” and by the New York Times as the summer event that “revolutionized the modern rock festival,” the 2018 Bonnaroo Music and Arts Festival will, as always, feature the comprehensive span of boundary busting diversity fans have come to expect, with an extraordinary array of artists performing around the clock across 10-plus unique stages over the four-day event.

Constantly looking for ways to enhance the fans’ experience onsite, Bonnaroo has several exciting new improvements, both structural and experiential, to announce for the 2018 event. For the first time, this year the communal areas, formerly known as pods, will be called Plazas. The Plazas are strategically located and well-lit public places throughout the campgrounds that will include: shade, free public WiFi, showers, fun activities and art, charging stations, Clean Vibes Trading Post redemption centers, misting stations, medical, safety stations, information and portable restrooms. Several permanent “Barns” are being installed in various locations onsite including VIP that are being designed to create more vibrant scenes in the campgrounds similar to the legendary ones at The Grind and The Garage. Another pristine wooded hangout similar to The Grove is also being installed.

The tie that binds all of these innovations together is the unmatched spirit and vision of the incomparable Bonnaroo community, shared by anyone who has been to the festival in the past or anyone who dreams of being there in order to become part of its magical legacy. In 2018, Bonnaroo plans to pioneer new ways of enriching the bonds that last long after the festival weekend is over. To do so, the organizers are creating new experiences to bring fans together, including Droolworthy Food with Celebrity Chef Tim Love, set to be a special community-focused area based on all things culinary, as well as House of Yes, Little Cinema, The Well, Tonalism by DUBLAB and The B-Hive Under the Tower. For more information on these uniquely designed experiences and the Plazas, visit: https://www.bonnaroo.com/experience/camping-plazas/. Bonnaroo’s Groop Camping experiences will also be taken to the next level with Themed Community Camps, including a Communal Campground created by festival veteran and superfan Matt Shultz of Cage the Elephant.

As in past years, Groop Camping in the GA campground is available to ensure that all fans get to camp with their friends no matter when they arrive onsite. Not only can old friends camp as one, but those who share a passion, identity or favorite way to express oneself can as well. The themed camps are similar to the groop camp except that the “groop leaders” are festival staff and guests who are dedicated to helping everyone have the best weekend of their lives. In addition to Shult’z campground, some other themed camps are: “Solo Roo’ers Camp” for fans attending alone who want to seek new relationships; “SheROO by MOTHERSHIP” for female-identified Bonnaroovian friends (a portion of this camp’s proceeds are going to benefit the Tegan and Sara Foundation.); “Fun SuperJam Camp” for musicians looking to share, learn and collaborate; as well as “Family Camping” and “Soberoo Camping.” For more information on Groop Camping, visit: https://www.bonnaroo.com/on-site-accommodations/.

Bonnaroo is also excited to announce the return of the beloved Kalliope stage this year. A staple of the Bonnaroo late night experience, Kalliope’s fires burn bright with nonstop DJ bliss into the early morning hours.

Bonnaroo is a truly global event, with tickets purchased in all 50 states and over 40 countries around the world. As one of the planet’s foremost musical events, it is proud to be one of America’s most environmentally friendly festivals, the only major event in the world with its own permanent solar array and compost waste on site. The festival also works with a team of 100% volunteers who collect food from its vendors and on-site caterers to donate over 20,000 LBS of food to a local food bank who feeds families in need, senior citizens and other members of the local community. Since its very first day, Bonnaroo has been diligent in its pursuit of true sustainability. The festival has twice been recognized by the state of Tennessee, winning the Governor’s Environmental Stewardship Award as well as the Tennessee Department of Environment and Conservation’s Pursuit of Excellence Award. Complete details, as well as Bonnaroo’s annual report to the fans, can be found at www.bonnaroo.com/experience/sustainability.

In addition, 2009 saw the formal establishment of the Bonnaroo Works Fund, a 501c3 nonprofit organization, serving as the philanthropic division of Bonnaroo Music & Arts Festival. The mission of the Bonnaroo Works Fund (BWF) is to support local, regional and national organizations that advance arts, education, and environmental sustainability. Since the inception of the festival in 2002, more than $7 million in support has been generated, largely benefiting Manchester, TN, Coffee County and surrounding areas. A few of the national organizations that have provided local and regional support include First Book, Notes For Notes, Little Kids Rock and Music For Relief – along with nearly 100 others. For more, info,, visit: http://www.bonnarooworksfund.org. Bonnaroo Works Fund is administered by the Community Foundation of Middle Tennessee.