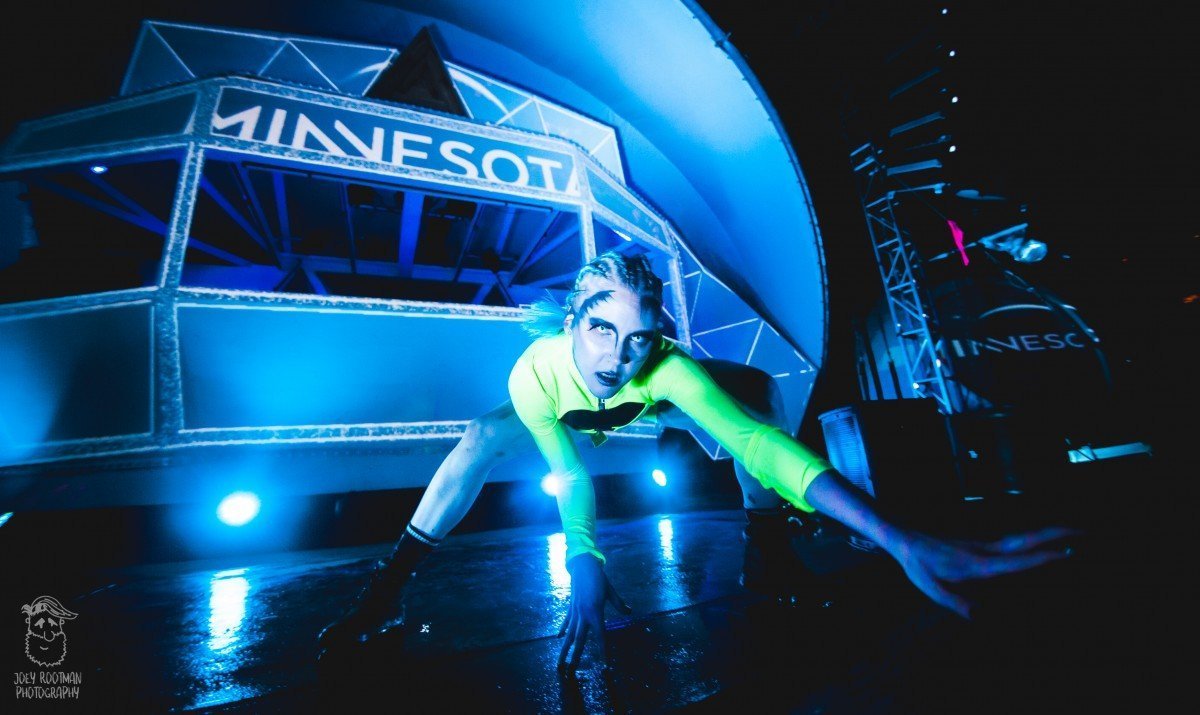 Back for the 22nd year at Salmo River Ranch, this year’s Shambhala Music Festival felt more humongous than ever. Bursting with over 20,000 attendees, the farm felt, once again, saturated with the excitement and positive energy it gets to experience only once a year. Shambhala is first and foremost a music festival, a loud one at that, however it is also so much more. It is a place of personal growth and discovery, a place to be you with no judgment. From the minute I set foot on the farm, the moment I received my first shambha-hug of the festival, the escape from the worries of day to day life was nothing short of palpable. This was it, it was time to Shambhala.

Though the festival starts in full on the Friday, Thursday provides the opportunity to slowly lower oneself into the bubbling madness of Shambhala. The Amphitheater and the Living Room are the only two stages open, but that doesn’t deter the crowds. The forecast for the weekend called for rain on the Saturday and Sunday, so on the Thursday the crowds were out in full regalia. The Living Room was alight with crafty totems, LED movement art, and elaborate get-ups. Meowmix, a group of female DJs from the Kootenays, had the crowd bouncing to melodic, groovy dance tunes, a perfect sound for sunset. Naturalist followed with a deeper, but still highly danceable disco style set. Closing out the music for the night, a Shambhala favourite Longwalkshortdock had the Amphitheatre packed to the brim as he head-banged harder than the entire dancefloor combined.

With the anticipation of a wet weekend on the forefront of everyone’s mind, Friday felt like a full send. Costumed ravers took the opportunity to doll themselves up, and flex the muscles of any battery filled totem which may not be so fortunate as to see the stages once the sky opened up. As night rolled in, JPOD in the Forest brought a cheesy grin to every face in that crowd, playing his classic upbeat remixes. There is nothing that compares to the joyful buzz of the Fractal Forest. It feels as if I witness more elation and euphoria within five minutes of breaching that forest than I do in the three-hundred something days preceding my entry. House music stages are never far behind, and Anna Lunoe’s contagious grin up on the Pagoda washed over the crowed for the full hour and a half. In contrast to Anna’s upbeat house set, Ivy Lab in the Grove threw down some seriously sexy tunes. They had the crowd tied around their finger playing songs like “Cake”. Decompressing from Ivy Lab, Be Svendsen played a 100% organic desert house set in the Living Room, definitely a highlight of the weekend for me. Spending even a little bit of time in the Living Room brings me back to a calm, pleasant mental state.

Saturday was a wild day, and allowed me to experience a Shambhala I haven’t experienced before: Shambhala in the rain. Not long into the day, the rain started, and didn’t let up for many hours. The effect was the farm turning to mud. Lots of mud. Luckily I was prepared with boots, raincoat and umbrella, and overall, it was a blast. While no one loves that moment when their boot gets sucked into a slurpy muddy mess, the rain gifted this year’s attendees with a truly unique experience. I spent hours mesmerized by the glittering effect of rain passing through the pagodas lasers, a sight I wouldn’t trade for a million dry socks. Charlesthefirst, departed from his regular stomping grounds, the grove, to rock the Pagoda with cozy booms and verdant visuals. Not too long after, Mau5trap’s No Mana replaced Charlie’s moss filled graphics with a virtual wonderland of with his signature video game inspired techno.

Looking back, walking around to the different stages was entertaining to say the least. The mud got so thick that some paths were virtually impassable, and the silliness that comes with watching technicolor ravers slither around a farm was a bucket full of laughs for the 99.9% keeping a positive attitude. Although not necessarily doctor recommended, many decided to embrace their inner ogre and send it shoeless like Shrek had he been an Excision fan. It was filthy fun. I took shelter in the Grove for a period of the night, seeing some people I may not have before, such as Om Unit and Barisone, both top-notch sets. Another reason how the rain poured an unexpected dose of glee into my night.

Sunday came, the rain never left, but today it seemed like we were all a bit more prepared. People were ready to make one more magical day at Shambhala. I kicked off the night with Moontricks, a returning duo that lives 30 minutes from Salmo. It wasn’t the first time I’ve seen them, but it was easily the best. There is nobody else that knows how to sneak in some cheeky banjo and a harmonica solo into bass music quite like they do. Their new song, “Wood for the Trees” wrapped us into a tortilla of warm fuzzies, and I think I speak for us all when I say we were drenched in spicy sauce. In an instant, a mere moment, we were all transformed into a saucy Sham-burrito.

This emotional high continued with Goldfish in the Forest. This South African duo blended live sax into electrifying house tunes and added even more colour to the already polychromatic forest. The live instrumentation continued with FKJ in the Grove, playing to a packed stage. FKJ commanded multiple instruments and electronic beats to take the Grove on a journey, flowing seamlessly from beautiful downtempo to upbeat house. A perfect follow up set, Bonobo upheld his legendary status by gracing us with a masterfully mixed DJ set, including tracks like “Cirrus” and “Bambro Koyo Ganda”.

As the night wound down, so did the rain. Finally, Shambhalites could rid themselves of their umbrellas to soak in the last hours of the festival. This is one of my favourite times, although bittersweet. There is so much love felt between people because we all successfully completed Shambhala; in the end we are all in it together. Rich E Rich, curator of the funkiest Forest on the planet, says it all in one song as concludes the festivities, 12pm Monday morning, with Sister Sledge’s classic: We Are Family.

Shambhala 2019 was an amazing, unique year. As always, the music was on point, and the vibes were utterly Shambhala. There’s no other place in the world where I feel connected to a group of people more than I do here. Love and acceptance is in abundance, and this year the rain gave us just another part of life to tackle together and to bring us closer. Its always sad to leave, but you can bet I’ll be there next year, rain or shine.