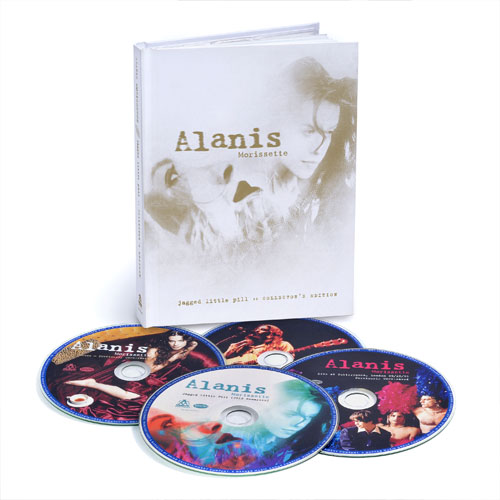 Alanis Morissette was just a few months shy of her 20th birthday when she started recording Jagged Little Pill. This year, the legendary album has reached that same landmark. To celebrate the double-decade milestone, the multiple Grammy®-winning singer-songwriter has curated a special collector’s edition of her debut, an album that’s sold more than 33 million copies around the world and ranks as one of the best-selling albums of all time.

This new four-disc JAGGED LITTLE PILL: COLLECTOR’S EDITION includes remastered audio of the original album plus an entire disc of 10 unreleased demos from the era handpicked by Morissette from her archives, offering a deeper and more personal look at the classic album. Also included is a previously unreleased concert from 1995 as well as 2005’s Jagged Little Pill Acoustic. Limited to 30,000 copies worldwide, JAGGED LITTLE PILL: COLLECTOR’S EDITION will be available from Rhino on October 30th. Also available on the same day is a two-disc DELUXE EDITION that includes the remastered original album and the second disc of unreleased demos. Both collections will also be available digitally.

“I’m super excited to share this music with a whole new generation of peeps, as well as people who have grown along with me over the last two decades,” says Morissette. “Thankfully, these songs have stood the test of time for me, and in their timelessness, I am thrilled to honor and reflect on them as well as the last twenty years of my life and career.”

In addition to selecting music for the set, Morissette dug into her personal collection to include never-before-seen photos and other ephemera from the time. She also contributes a new essay reflecting back on this time in her life along with stories behind the 10 demos she recorded between 1994-98, all of which are making their official debut here. The track “The Bottom Line” is possibly the most historically significant—it’s the first song Morissette and album producer Glen Ballard wrote together within an hour of their very first meeting in 1994. Other early tracks from those sessions include “Superstar Wonderful Weirdos” and “Closer Than You Might Believe.” Also featured are several tracks Morissette wrote while touring the world and ascending into a global phenomenon following the album’s release including “King Of Intimidation” and “Death Of Cinderella.”

Ballard also oversaw mixing and mastering for this collector’s edition. “Twenty years has not diminished the energy and excitement we captured on these recordings from 1994,” says Ballard. “It’s been a joy to sit with these tracks after two decades and to find them in such good shape. The power of digital recording gives us this time machine and, although we are twenty years older, this music still sounds fresh!”
The third disc of JAGGED LITTLE PILL: COLLECTOR’S EDITION features Jagged Little Pill Acoustic. Released in 2005 to celebrate the album’s 10th Anniversary, this collection finds Morissette delivering “unplugged” and alternate interpretations of every song from the original album.

The set concludes with an unreleased complete concert from the Jagged Little Pill tour. Recorded in London at Subterranea on September 28, 1995, the show captures Morissette at the peak of her success as she makes her highly anticipated UK concert debut. For this powerhouse performance, she was backed by her touring band (dubbed Sexual Chocolate), which featured a stellar rhythm section with bassist Chris Chaney (Jane’s Addiction) and drummer Taylor Hawkins (Foo Fighters).