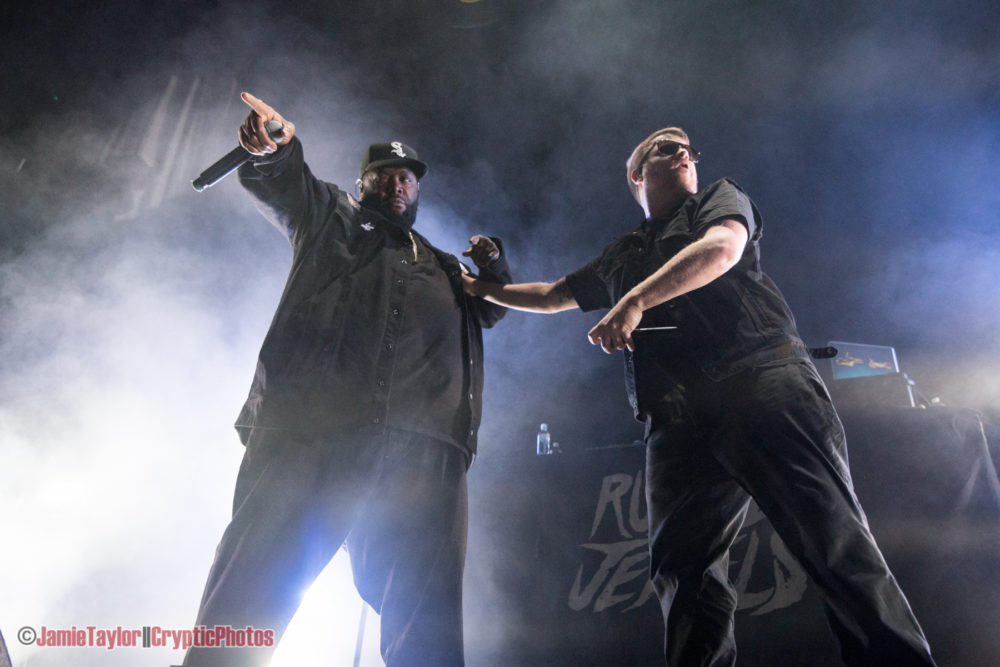 Run The Jewels, the lauded duo of El-P and Killer Mike, have shared the long-awaited details of their feverishly anticipated new album, Run The Jewels 4. Set for a June 5 release via Jewel Runners / RBC Records / BMG, this eleven song, 40 minute powerhouse is their most ferocious and focused effort to date, and sports a lineup of all-star guests including Pharrell Williams, Mavis Staples, 2 Chainz, Zack de la Rocha, Josh Homme, DJ Premier, and Greg Nice. Recorded primarily at Rick Rubin’s Shangri-La Studios and the iconic Electric Lady Studios in NYC, RTJ4 represents two years of intensive writing, recording, distilling, and amplifying the most potent elements of their music. The result is a collection of wall-to-wall bangers illuminating the group’s unique ability to straddle the worlds of pointed social commentary and raw, boisterous fun.

The new album is preceded by two singles, both of which arrived to rapturous reception. The first, “yankee and the brave (ep.4),” dropped during an impromptu Instagram Live session the duo held as shelter in place orders were starting to take hold. Days later, the second single “ooh la la (feat. DJ Premier & Greg Nice)” made a surprise debut in the season finale of the hit Netflix series Ozark, and became the #5 most Shazam’d song in the country. This was soon followed by the song’s glorious new music video, directed by Brian & Vanessa Beletic, which quickly shot to the #10 trending position on YouTube, surpassing 1.5 million views in its first week, and brilliantly setting the stage for the arrival of RTJ4.

The time between albums has been a very busy one for the duo, including scoring their first gold-certified record for “Legend Has It” from RTJ3; receiving their first Grammy nomination for the song “Chase Me,” a collaboration with Danger Mouse for the hit film Baby Driver; embarking on a full US arena tour with Lorde; contributing an exclusive song for the Marvel blockbuster Venom; and landing a major sync in a global Cadillac ad, which premiered during the 2020 Academy Awards. Additionally, Killer Mike debuted his acclaimed Netflix show, Trigger Warning with Killer Mike, continued his advocacy for Bernie Sanders, and lent his political muscle to the successful election of Atlanta’s first female black mayor, Keisha Lance Bottoms. He’ll also be making his Hollywood debut in a soon to be announced feature film. Meanwhile, his partner in rhyme and RTJ producer El-P stayed busy in the studio making the music for RTJ4, contributing a song to the soundtrack for the Oscar-winning film Roma, scoring the biopic Capone starring Tom Hardy (which makes its digital debut today), and began a major reissue campaign for his celebrated solo recording catalog. He also made a surprise cameo in the new season of Mr. Robot with Rami Malek.

In addition to new music, Run the Jewels will be launching the group’s much-anticipated cannabis line, a collaboration with the founder of the legendary Cookies strain. The group are also set to join Rage Against The Machine for their massive world tour, which just last week was rescheduled for 2021 as a result of the Covid-19 epidemic, and is already sold out. New tour dates below.