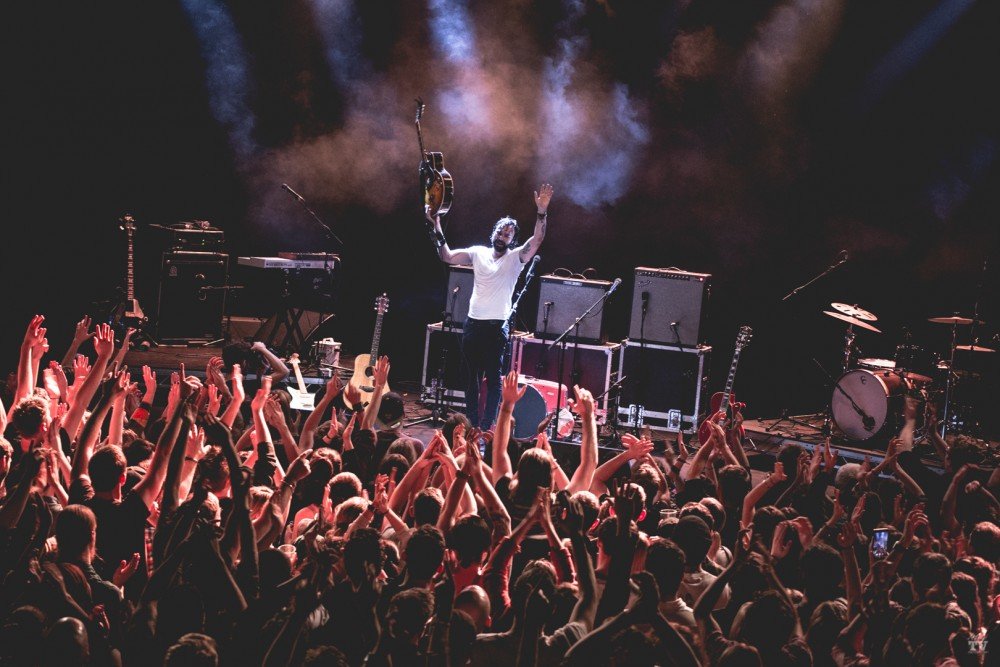 Look Alive, the new EP from Shakey Graves, is out today to coincide with the final episode of the “Hello Gorgeous” web series. “Hello Gorgeous” is a three-part documentary/music video project produced by Shakey Graves frontman and bandleader Alejandro Rose-Garcia in association with Onion Creek Productions. The show aired bi-weekly beginning last month, with each chapter in the series taking a behind the scenes look at the history of Shakey Graves, the making-of Hello Gorgeous, life on the road, as well as a performance of a brand-new track. Episode 1, “Look Alive,” can be viewed HERE.

Episode 2, “The Recipe,” can be viewed HERE. The finale, Episode 3 “Under the Hood,” can be viewed/shared HERE.The studio versions of the songs featured on Look Alive were all recorded at Hello Gorgeous and produced by Rose-Garcia. The title track “Look Alive” was co-written by Finneas O’Connell (Billie Eilish) and Rayland Baxter and co-produced by Shakey Graves drummer and longtime collaborator Chris “Boo” Boosahda. The Austin American-Statesman hails, “Its trippy, dreamy, psych-folk vibe sounds like something new for Shakey Graves, while still clearly connected to past musical explorations. As a possible indication of where Rose-Garcia and his bandmates are headed next, it’s an intriguing and inspiring signpost.” Listen to the full EP HERE.

Long before very necessary social isolation, Rose-Garcia started working on this project. It had been a dream of Rose-Garcia’s for many years to establish his own studio for he and his cohorts to create, so last year he found a small house in Goforth, TX, set up shop and named the space Hello Gorgeous.  Of making the series, Rose-Garcia explains, “I made ‘Hello Gorgeous’ without goal—not to create a TV show, not to make music videos, simply to document and create something that meshed all the worlds of my creative life into one. It was an experiment of sorts, trying to peel back that personal veil of secrecy. How many bad takes happen before a good song emerges? If an idea enters a room, can you see it in real time? I was weary of spending hours and months working behind closed doors only to emerge with a handful of carefully crafted songs to then sit on and promote until you can’t stand hearing them, all before anyone in the public had heard a single note. I wanted to create a unified project, a song that was the video, a video that was the story, the story that was the point.

”Rose-Garcia began funneling some of his more uncharted creative interests into this project including hand-built miniatures and animation with the hopes of fleshing out the unique world he envisioned. He furthers, “I was looking for more exploration without purpose in my own life, and I felt that if I shared my hunger for this idea with other people, I could perhaps encourage someone who’s too scared of results to start, to just start.

”The songs and subsequent videos were being constructed furiously with no deadline in mind but coincidentally, as soon as production wrapped, the pandemic hit and the shelter at home order began. “I felt stunned, fearful, tingly. Things were changing and all at once I realized that I had been spending all of my creative efforts working on a thing that was suddenly not only viable, but one of the only methods of expression allowed in this current crisis,” Rose-Garcia reflects. “In more ways than I realized, I was ready for a reset. I’m always urging myself to view things differently, everything from global politics to household politics. Right now, the unsustainable aspects of life have never been clearer and I know the world can’t live on song alone. I’m racking my brain to find ways to help where I am, pledging myself to work at the food bank in this time, and trying my best to raise funds for different industries and individuals in need. I feel genuinely honored that there are people in the world who are soothed in any way by me playing a ditty or talking to them through a computer screen and that something that I’ve created from thin air can actually help potentially feed someone, and more than ever it feels like maybe that was always the point. I feel terrified and optimistic at the same time and its not like COVID-19 is the one glaring issue with life as we know it, but in a way it is a crucial reminder that things can and will always change at the drop of a hat, for worse and for better. We are now all trying to wake up each day in the same four walls with a new view of the world.  I can share a little bit of my isolation with you, and I hope for the same in return. And with that in mind I welcome whatever terrifying awesome thing comes next. Hello Gorgeous!”

On Monday, May 11, Rose-Garcia will be a featured guest on The Paste Happiest Hour—the daily live-stream and music show. Tune in at 5pm ET to watch him perform songs off Look Alive and more. Rose-Garcia’s bi-weekly live-stream concert/hang/call-in/quiz show/performance will also take place next Monday. The live-streams raise money on behalf of MusiCares.

Originally a solo music project by Austin-native Rose-Garcia, Shakey Graves now includes members Patrick O’Connor (guitar) and Jon Shaw (bass), and Boosahda (drums). After a pair of independent releases, Shakey Graves released the breakout full-length And the War Came in 2014 on Dualtone Records, which won an Americana Music Award for “Emerging Artist of the Year,” followed by years of extensive touring and prestigious festival appearances both stateside and abroad. In 2018 Shakey Graves released Can’t Wake Up, leaving behind much of that stripped-down, folk sound, and drawing on another set of musical influences, ranging from the Beatles and The Kinks to Elliott Smith, Broken Social Scene, Built to Spill and other ‘90s indie-rock bands.