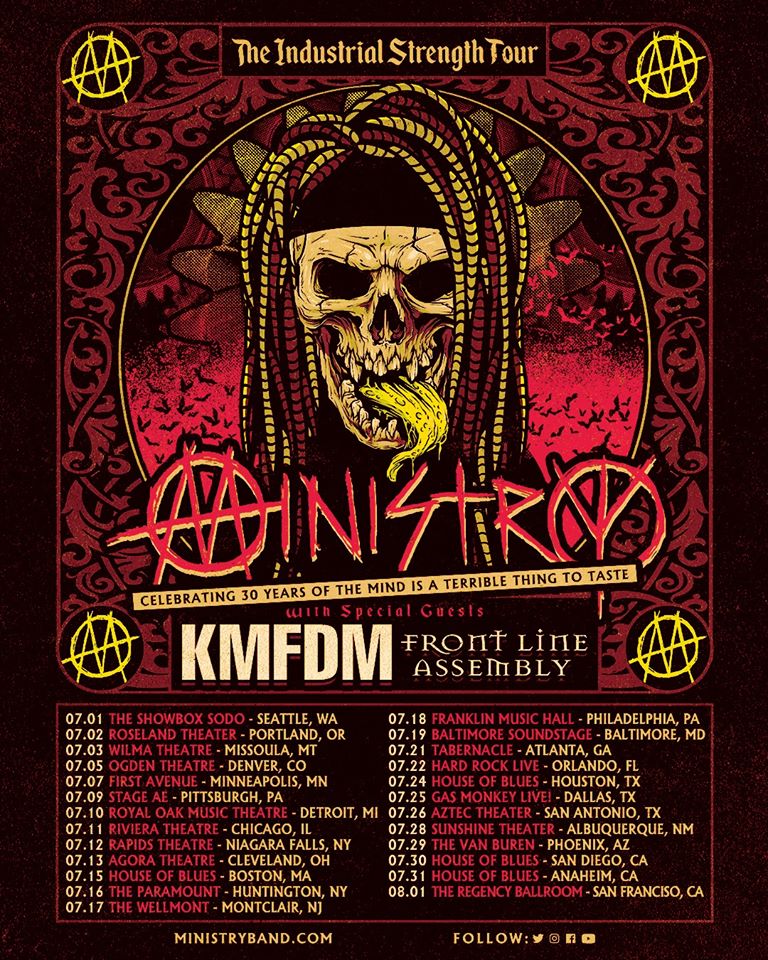 American industrial metal band Ministry will be hitting the road in 2020 for “The Industrial Strength Tour” with KMFDM and Front Line Assembly.

In honor of the 30th anniversary of Ministry’s revolutionary album “The Mind Is A Terrible Thing To Taste,” band creator Al Jourgensen decided to go old school with the celebrations, announcing The Industrial Strength Tour to kick off this summer alongside very special guests KMFDM and Front Line Assembly.

“’The Mind Is A Terrible Thing To Taste’ just turned 30. Who knew we’d still be around to see this day,” says Jourgensen. “But since we are alive and kicking, we figured we’d hop in the way-back machine and recreate the infamous original tour with KMFDM, and add in Front Line Assembly as well. Don’t miss it this time because we’ll be in wheelchairs for sure in another 30 years. May the fence be with you!”

“The Mind Is A Terrible Thing To Taste” was released in November 1989 and features hit singles “Thieves,” “Burning Inside” and “So What.” The record further cemented Ministry and Jourgensen as music innovators ahead of their time, producing a voluminous, aggressive sound that became a trademark for the industrial music genre.

Kicking off July 1 in Seattle and wrapping August 1 in San Francisco, the 25-date Industrial Strength Tour hits most major markets in the U.S. Tickets go on sale Friday, January 17 at 10 am local time at www.ministryband.com. Blabbermouth is also hosting an exclusive presale beginning at 10 AM local time Tuesday, January 14 and running through 10 PM local time Wednesday, January 15—find the presale code at https://www.blabbermouth.net/.

The Industrial Strength Tour comes after a memorable 2019 for Ministry who joined Slayer on the thrash metal band’s final dates of its Farewell World Tour and the release of a new fully authorized limited-edition visual history book, “Ministry:Prescripture.” Find more info here: https://www.melodicvirtue.com/collections/ministry