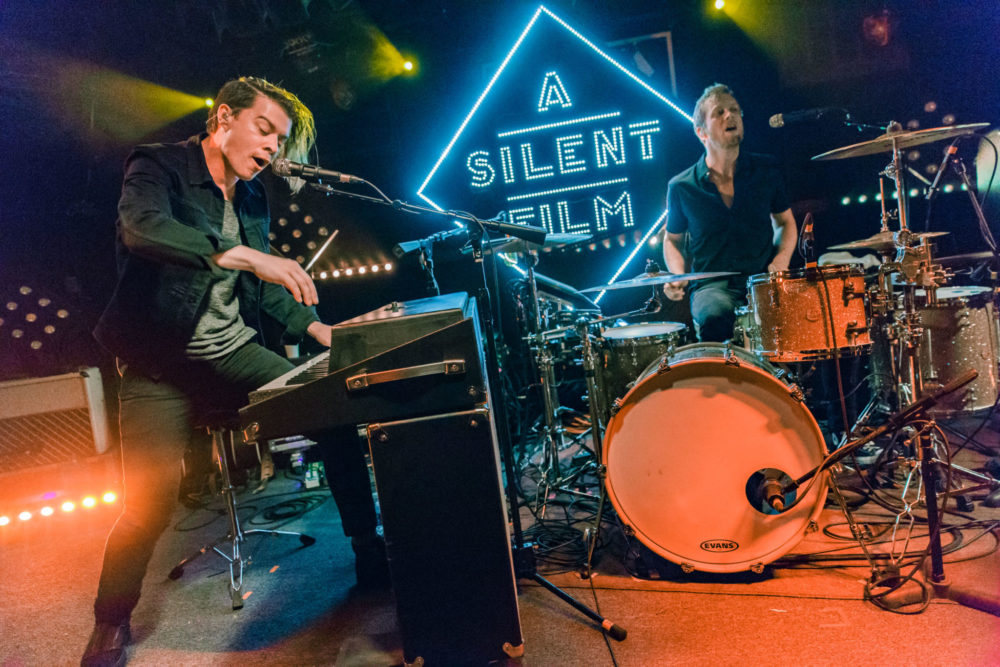 A Silent Film, the duo of singer Robert Stevenson and drummer Spencer Walker, released their third, self-titled album last fall, and in the months since they’ve been touring hard behind it. The Oxford, England-based band did a 27-date headlining tour through the US last fall, and already this summer they’ve returned for yet another 21 shows. While many of the dates this time around are hitting different cities than the fall tour, the group returned last week to the Rock and Roll Hotel in Washington, DC, where they last played at the beginning of November.

On album, A Silent Film are quite good, but in their live performance they manage to push everything up several notches higher, putting on one of the most dynamic, high-energy performances out there. To a large extent this is due to frontman Stevenson, who isn’t afraid to move around even a very small stage, getting right up in the audience’s faces at one moment, and dramatically playing keyboards at the next. Backed not only by Walker but also by touring members Matt Kidd on guitar and Jacob Roos on bass, Stevenson put on a performance worthy of a much larger venue.

While there were, of course, numerous overlaps in the set list with the fall show – the band’s fans wouldn’t forgive them if they skipped “Harbour Lights” (with which they opened the show this time), “Anastasia,” “Danny, Dakota & the Wishing Well,” or even newer songs like “I Don’t Need a Reason” and “Lightning Strike” which have already become staples of their set. They played all of those, of course, but also took advantage of the opportunity to work songs into their set that they skipped last time around, such as “Chinese Lanterns,” “Lake Swimming,” and “Firefly in My Window.”

The real treat of the night, though, came halfway through the set when halfway through the set, Kidd and Roos exited the stage, leaving the core duo of Stevenson and Walker to play a three-song acoustic set. Walker moved behind the piano while Stevenson took up an acoustic guitar, and they played stripped-down versions of “Queen of a Sad Land” and “Losing Hand,” as well as a surprise cover of Bruce Springsteen’s “Dancing in the Dark.”

Fans who came out to the show also got a taste of what is to come in the band’s future, as they played four new songs – “Celia,” “Vermillion Dream,” “Unturned Soil,” and “Bullet in My Head” – which are amongst those slated for the next album, which they are currently working on. Based on the strength of those songs, it seems certain that the band will continue to move upward for some time to come.

The DC show was early on in their tour, and many dates still remain. If they’re coming to your town, you owe it to yourself to go and check them out.