If you were looking for a fun Saturday night in Vancouver on March 10th, this was the place to be. It was a sold-out show at the Commodore Ballroom with a mix of people from different cultures, ages and free-spirited souls. The night started out with a DJ set from Vancouver local Krisp Kutz who got everyone moving to a variety of dance, soca, soul and dubstep hits.

With little break in between sets, another BC local hit the stage, Erica Dee. She came on with a gleaming smile and golden jacket ready to rock the crowd with her soulful voice. As her performance went on, she brought on stage several guests to assist her. First up were two freestyle dancers from Immigrant Lessons, who acted out an emotive dance with Erica standing by to supply synth beats and melodic harmonies. Second to join her was Desirée Dawson, with an indie-soul feel, then Christie Lee Charles who is indigenous to Vancouver from the Musqueam territory and Young Dene also rapped a few verses. Then one last female singer, Shankini came on giving a back and forth r’n’b style rap with Erica. Her persona and stage presence was very strong and having more female singers join her on stage was empowering.

She gave a shoutout to Angela Miracle Gladue, aka Miss Chief Rocka and dancer of A Tribe Called Red, for her native jewellery she was wearing so proudly. Towards the end of her set two Indigenous Hip Hop artists, Snotty Nose Rez Kids took the stage to give a grimy rap full of energy. Finally, all the guests took the stage for one last bow. It was truly amazing to see the local and indigenous talent. 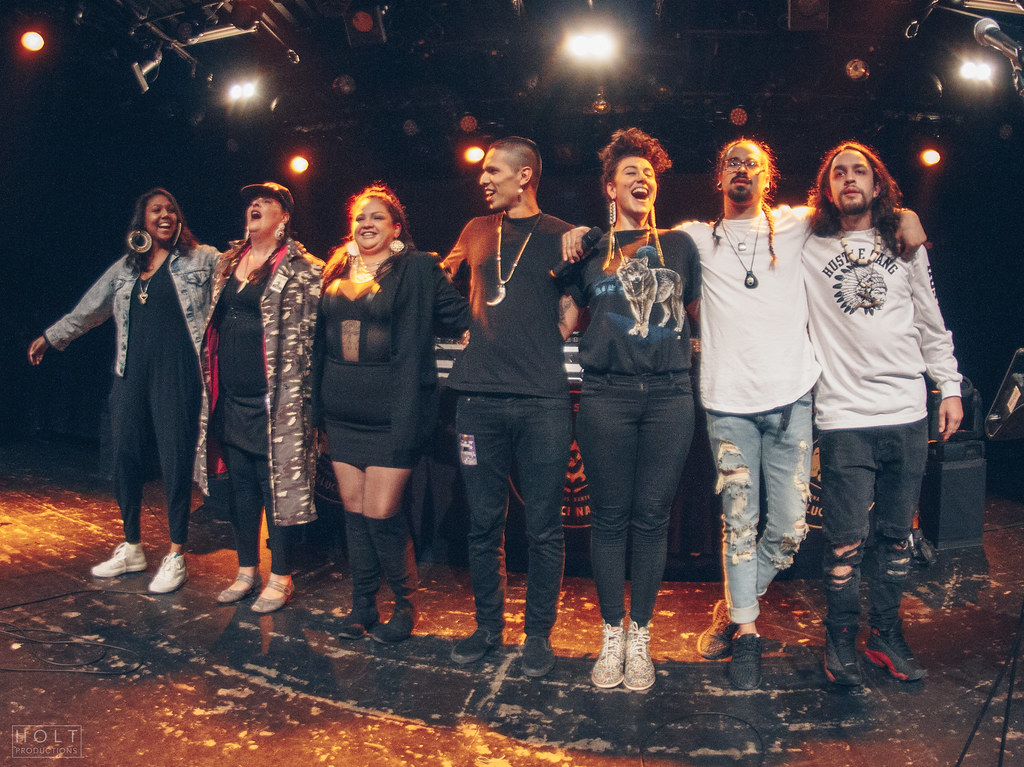 Closing up the night were native Ontario hip-hop legends A Tribe Called Red. The crowd was thoroughly warmed up and ready to dance the night away to their fantastic fusion of First Nations music, reggae, rap and moombahton. The live group consists of two DJs, Tim “2oolman” Hill (Mohawk, of the Six Nations of the Grand River) and Ehren “Bear Witness” Thomas (of the Cayuga First Nation) who came on calm and collected, slowly revealing themselves and the excitement about to hit the venue. After a few of songs, it was time for their secret weapon(s) to make an appearance, two native dancers (Matthew Creeasian and Angela Miracle Gladue) positioned themselves in front of the DJs wearing a mixture of indigenous dress/jewellery and casual streetwear. Soon they began to breakdance and freestyle, giving the crowd even more excuse to cheer and jump. 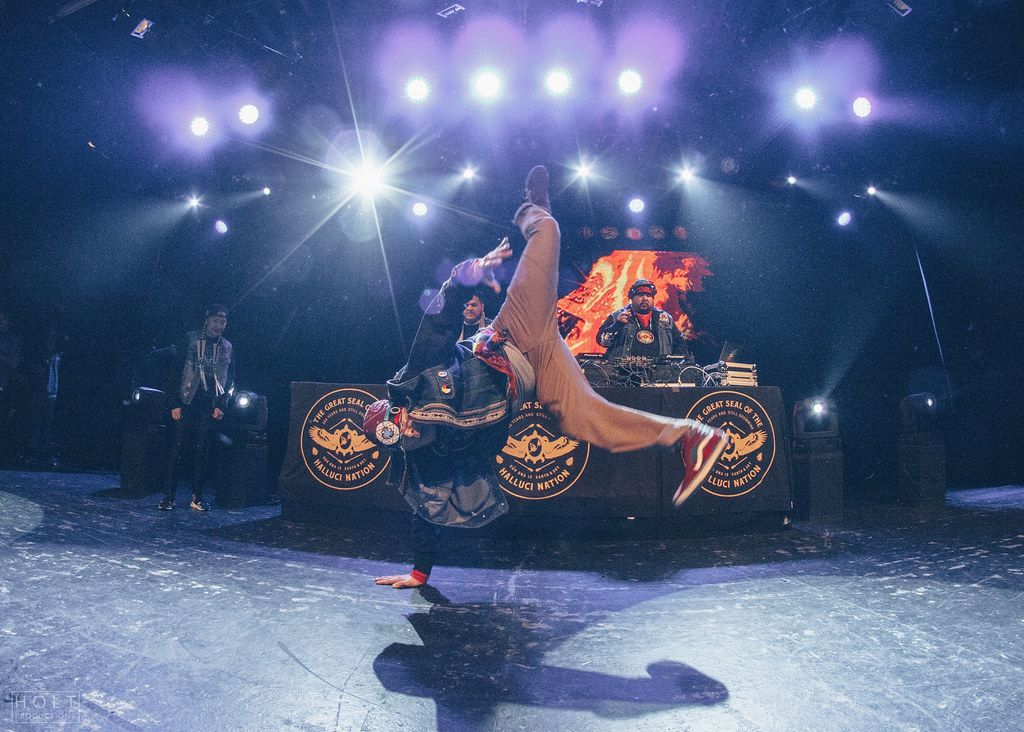 After a couple of songs, the dancers left the stage, focusing the attention back to the DJs and cartoon western-style visuals behind them. Their music not only makes people move and sway to their hypnotic beats but also opens minds to the rich cultural music that the native people have in North America. As someone who has never been exposed to this (I am originally from England), it was extremely fascinating.

As their set continued, the two dancers re-appeared, only this time in full indigenous clothing backed with songs such as ‘Indian City’ to get them leaping across the stage. 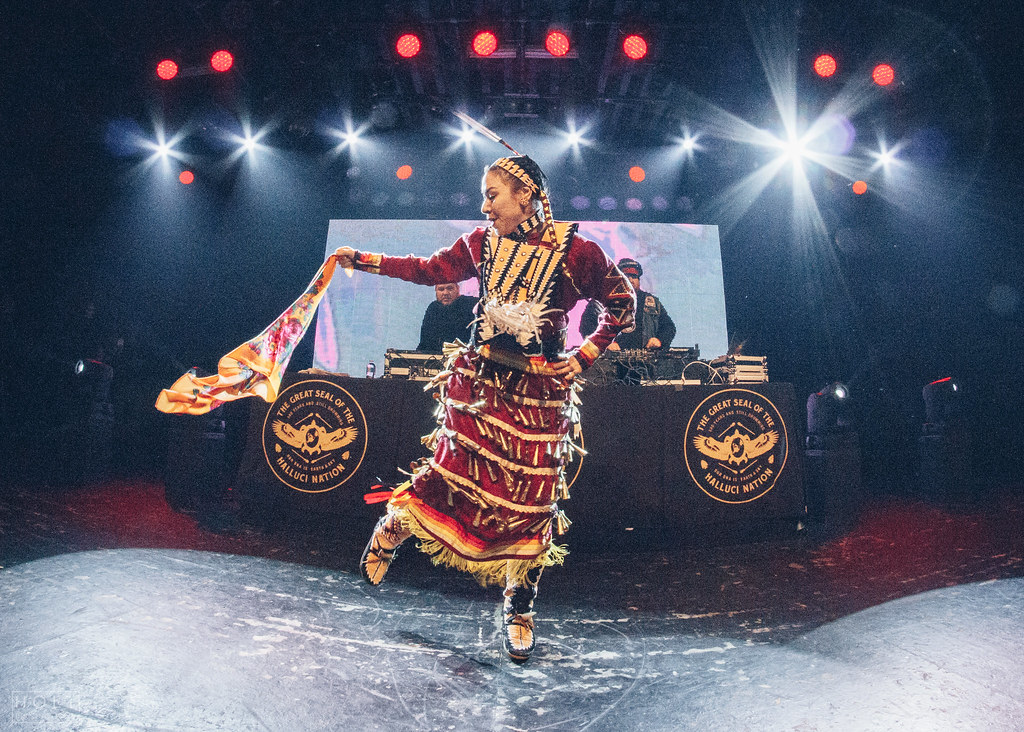 Not only was this an incredible experience but one I will definitely be looking forward to seeing again.