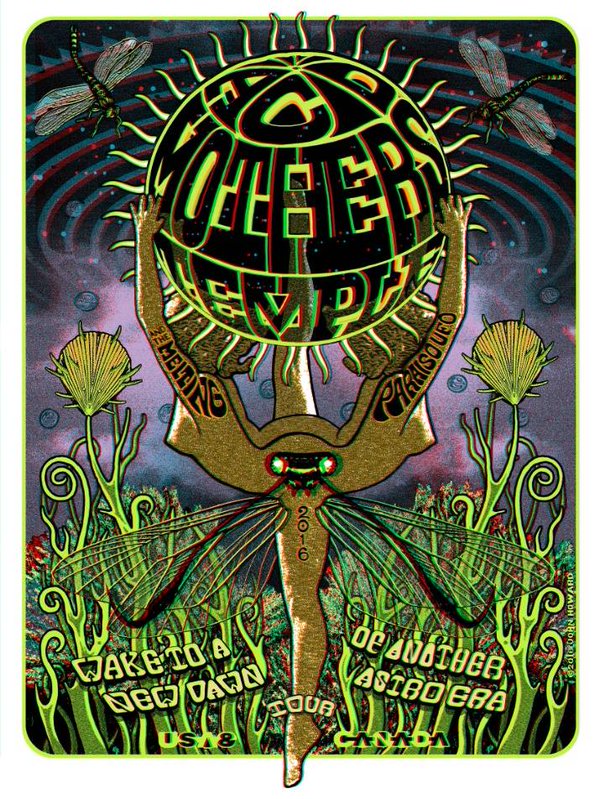 Last night, Vancouver got an annual  fix of psychedelia courtesy of Acid Mothers Temple. The performance landed deep on the psychedelic side of the musical spectrum, the evening was arranged by Timbre Concerts have put on a great many psychedelic shows including the particularly trippy  Levitation Vancouver festival. AMT, are a long standing Japanese spaced-out group that range from extenuated stoner-rock succulent riffs to drifting, bizarre sonic experiments. The evening’s performance did well to further the band’s musical reputation.

Acid Mother’s Temple: “Wake To A New Dawn Or Another Astro Era 2016” poster by John Howard.

Playing support for the evening were Orphan Goggles, a savage and thrilling four piece from Los Angeles. An AMT show usually includes an opening acts of considerable interest; Orphan Goggles, as their name may suggest, play music with a bizarre, post-psychedelic perspective. Although the group played with a the set up of a regular four piece rock band, their sound and attitude was anything but typical. Vicious, primal, and with a touch of humour and absurdity, Orphan Goggles effectively warmed up the the crowd’s experimental appetite.

Led by group founder and guitarist, Kawabata Makoto, AMT are touring veterans.  North America has been fortunate enough to expect an AMT roughly every year; 2016 featured the psychedelic heavy weights with a significantly altered roaster. Of course, AMT are and will always be Makoto’s project, the group has always been something of a revolving “Soul Collective.” The substantial switch up in musicians made this particular AMT performance very distinct from their last five west coast tours.

Satoshima Nani has played drums with AMT since 2014.

Although there were the familiar faces of  guitarist Tabata Mitsuru and the iconic and wizardly Higashi Hiroshi, AMT’s rhythm section has been recently reformed, with the energetic addition of drummer Satoshima Nani. Most sorely missed onstage was longtime band member Tsuyama Atsushi, who had performed much of the group’s vocals in addition to bass duties.  Since Atsushi‘s retirement, the torch has now been passed to S/T, a member of the now defunct Japanese psychedelic rock outfit Green Milk From The Planet Orange Planet. S/T performed his part with art and admiration; he is a more than capable bass player and his distinct style has altered the core atmosphere of the band drastically. Of course, it was still spacey and psychedelic, but it was more fluid and drifting than some of the more guitar riffed shows in past years.

Longtime fan favourite and live staple  “Pink Lady Lemonade” made the setlist with the later song being resurrected after a long, meandering jam where Makoto lifted his guitar into the air with a wild and lengthy guitar solo. One might almost assume that he could solo in his sleep if his meditative attention was not apparent through the sweat dripping down his forehead.

Overall, the evening was spacious and explorative musical adventure that was anchored down the impressive rhythm section of S/T and Nani. Acid Mothers Temple are a longstanding and fruitful institution. The group has set a large standard for can be accomplished, brilliantly pulling compatible influences from the worlds of psychedelic rock, jazz and the spacey avant-garde. This project’s musical continually impressive performance are the foundation of their dedicated fanbase. Check out a show if you can; Acid Mothers Temple are simply out of this world.

Check out the entire Acid Mothers Temple set including a cover of Black Sabbath‘s “The Wizard” courtesy of Lief Henderson of Top Hat Tapes.