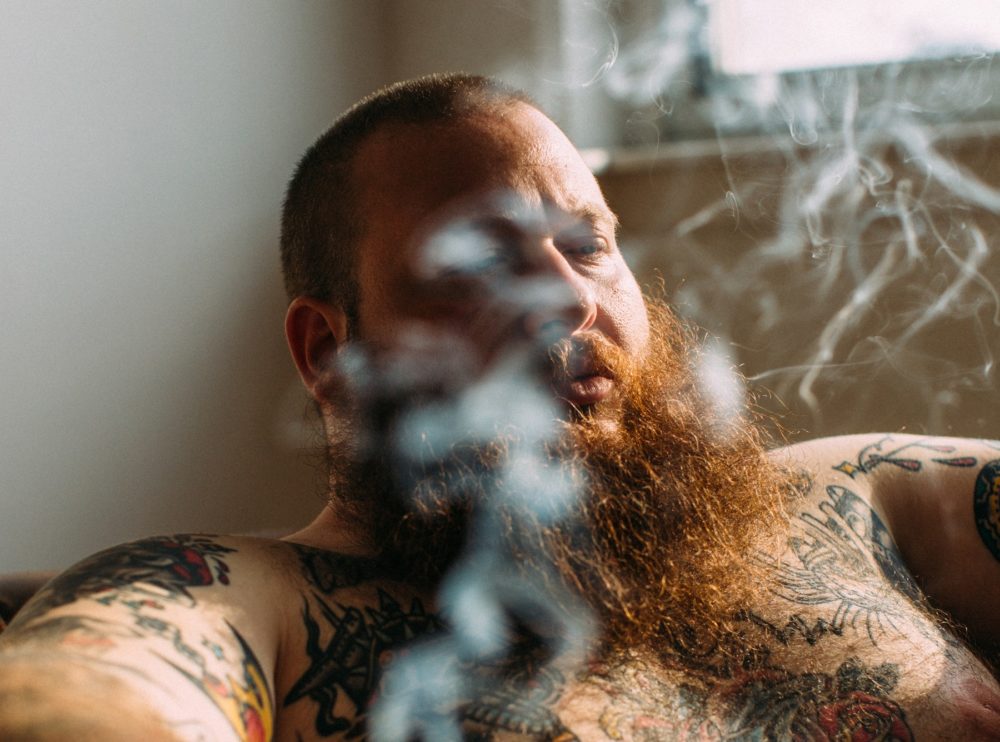 For the second time in as many years, Vancouver rap aficionados flocked to the Commodore Ballroom to witness Action Bronson inimitably brash, witty, and jocular brand of hip-hop – this time, with a brand new album, Blue Chips 7000, in tow under his Knicks shorts’ waistband. The Queens, New York, MC has always brought incredible energy and stage presence to his live performances, and the stunts he’s pulled on stage – tossing a meddling body-guard, launching a chicken parm sandwich into a crowd, smoking massive dabs, rapping from a porta-potty – have cemented his status as a can’t-miss act, a rapper who not only raps just as well live as he does on the record, but who also has a natural charisma, charm and cheekiness that is a petri-dish of hilarious antics.

Bronson is built like a rhinoceros with the head of a lion. He’s a big, big boy with piercing (and yet ever-stoned) blue eyes, a big, round, shaved head and a wild, bushy red beard. I’ve never seen him in pants – always athletic shorts – and it’s rare to see him wearing a top that isn’t a sports jersey. Hip-hop has always had its ties in fashion – from Flava Flav’s bling clock to Slick Rick’s Kangol obsession, to G-unit apparel to Kanye’s diss tracks against Nike – but Bronson exists entirely outside of that world. He dresses comfortably, has lines about shitting himself, and compares himself to Kevin Spacey in the movie “Ghost”. He lives an extraordinary life of hedonistic grandiosity and yet he often presents himself as Joe Everyman or, worse yet, Joe Shitshispants. Sure, he “came out the pu**y wearing Tims,” but you can’t fault the man for biology.

The crowd went nuts when Bronson first swaggered to the front of the stage and we didn’t let up much throughout the show. We sang along with choruses which intermittently deprecated and aggrandized Bronsolino, bobbing around and weaving through clouds of marijuana with our hands raised high. Bronson himself got no rest, taking breaks between songs only to sign memorabilia for fans. Bronson must have signed fifteen articles of clothing, five or ten copies of his cookbook, “F*ck, That’s Delicious”, and one single bumper of a “really f*cking nice BMW”.

Bronson blasted through tracks that spanned his entire 7-year catalogue, including the booming, “Wolfpack,” the jaunty hip-hopification of several 80’s classics,“Contemporary Man,” the hilariously titled, unplugged, Tracy Chapman-sampling, “Amadu Diablo,” the Alchemist produced, muzak-sampling, organ-riff-flipping, “La Luna,” the Slash-inspired “Easy Rider,” the hustler-ballad, “Actin’ Crazy,” and several others. Bronson was hilarious, braggadocious, confrontational, jovial, a mama’s boy, a gangster, grateful, aloof; a true contemporary renaissance man. I ran into a friend, who is an autograph hound, during the show and he told me that Bronson consistently came out back after his shows and said a quick hello to fans who had the patience to wait. I had a ticket to see Boys Noize at Celebrities and they were set to get underway soon after Bronson’s show ended, but I couldn’t pass up the opportunity to shake hands with the Don. I waited a little longer than my coat could warm me for, but I got my hello, a nice signature, and a hug from the man himself. Bronson is a true treasure in the hip-hop community, and I’d highly recommend seeing him play a show if ever you have the chance.