Fans of Against Me! will know that the outspoken Gainesville punks have never been afraid to push boundaries. And as the band brought their energetic live show to Vancouver (the last Canadian stop on a month-long North American tour) it was clear that they’ve still got plenty to say.

Against Me! were joined by an eclectic mix of music makers at Vogue Theatre on Friday night, with San Francisco dream rockers Annie Girl & The Flight kicking things off. But judging by the abundance of young ladies with brightly coloured hair holding tight to their positions in the front row, a large portion of the audience was there to see Frank Iero. The former My Chemical Romance guitarist and his band The Cellabration played a brief but powerful set of loud, slightly chaotic but undeniably tight songs from his debut solo project. And the gals in the front row loved every minute. But when tall, lanky Against Me! front woman Laura Jane Grace took the stage, more than just the first row went wild; the entire theatre was brought to its feet.

Cast your mind back a few years: when Reinventing Axl Rose was released by Against Me! in 2002, the band became an icon on the punk scene and known for a powerful live show which consisted of short, loud party anthems with political undertones. A lot has changed for Against Me! since 2002 but one thing remains: they still know how to put on a great show.

Grace and her support team of long-time band member James Bowman and relative newcomers Inge Johansson and Atom Willard kicked off the set with ‘True Trans Soul Rebel’ from 2014’s Transgender Dysphoria Blues. The focus of the night was definitely on material from this release; the band played almost every song from their latest album interspersed by a healthy smattering of tracks from 2010’s White Crosses.

The band members, in their trademark all-black attire and backed by a huge flag bearing a skull logo, played like the seasoned musicians they’ve become. With most of their songs clocking in at just over 3 minutes there was plenty of time to pepper the set with a selection of tunes from their ever-growing library. They kept long-time fans happy with favourites such as ‘Walking is Still Honest’, ‘Pints of Guiness Make You Strong’, ‘T.S.R. (This Shit Rules)’ and even ‘Cliché Guevera’ while squeezing in almost every recent single they’ve released. And at no point did they seem to run out of energy.

Grace’s voice is as powerful as ever, and using every minute of her experience as a touring musician she was able to keep the audience engaged from start to finish. There was limited banter but it didn’t matter; the crowd swayed, surged, sang along and crowd surfed for the entire set. And although it would be easy to go to an Against Me! show and just have a good time, it’s difficult to not be moved by their songs. This is a band that writes music about everything from politics, relationships gone wrong and the state of the music industry to Grace’s experiences as a transgender woman. Against Me! doesn’t shy away from difficult subjects and they should be applauded for staying true to what’s important to them. 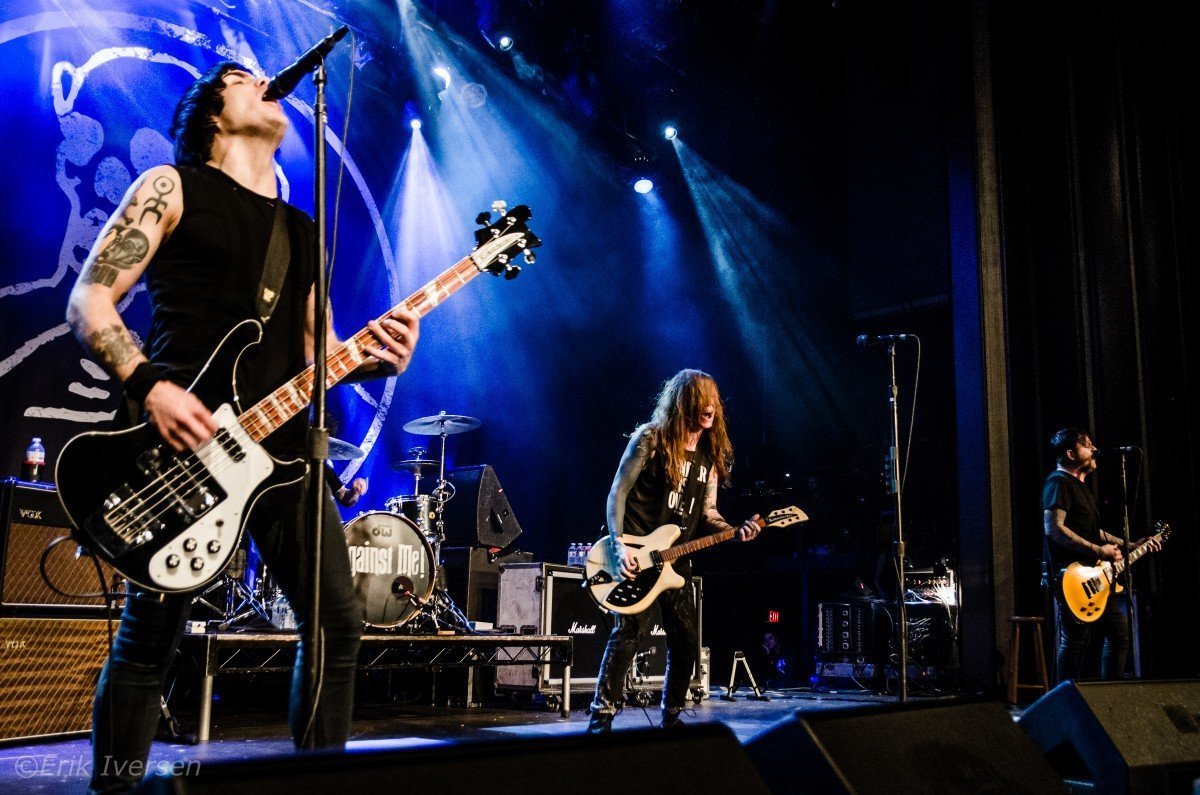 Closing off the set with the anthemic ‘Sink, Florida, Sink’, Against Me! made it clear that while they continue to push boldly forward as a band, they’re not planning to forget their past any time soon. And that’s good news for new and old fans alike.