90s Canrock fans have been waiting a long time for this. With reunions of bands that called it quits years ago becoming a pretty regular occurrence, this was still one people seemed to be really looking forward to. Age of Electric have played a couple shows recently, but this was the first one in Vancouver in around 18 years. Now see, I was part of that early fan base, but I didn’t start photographing shows (or really going to them at all) until 1999, just after they had split up for, what seemed like at the time, good. Within a few years, I had tallied shows by a multitude of the individual members’ subsequent bands, and even somehow infiltrated Todd Kerns’ camp for a while, shooting studio sessions and going halfway across the country on tour with his band. Then Kerns went off to Las Vegas where he’s had some pretty nutty success and also ended up playing bass for Slash, which is no small potatoes. But all this time, I never thought I would have a chance to see Age of Electric, in its original form, on a stage in front of me.

Opening the show was Fake Shark, but unfortunately I was shooting a show down the block and didn’t make it in time for their set. I got in just a few minutes before the next band came forth, Gay Nineties. They have a sort of roundabout connection, in that way that bands in Vancouver are pretty incestuous, as singer Parker Bossley also plays in the band Mounties, alongside Ryan Dahle, who is also in Age of Electric (of course). Early in the set, Bossley stopped to get the still-thin crowd to sing the intro to Age of Electric’s big hit “Remote Control” with him. The attempt was met with less-than-enthusiasm. “Oh… that sucked. Ryan’s up there fucking bummed,” Bossley said, hiking a thumb towards the backstage area. The second try was more of a success. Bossley is a great frontman. Always stylish, tonight he was outfitted in artfully-clashing plaid slacks and a spotty, billowy top, open a few buttons to show off a fanned-out, oily-green necklace atop a swiftly-sweaty chest. He drapes himself across his LED-lit mic stand, and butters up with crowd with plenty of “You’re beautiful… especially you two,” type of banter. Add to that the sheer joy of drummer Malcolm Holt, grinning through his flying arms, frequently chucking one stick in a spin high above his head or twirling one through his fingers. Occasionally, he misses the catch on the tossed stick, and continues to play by bashing his fist on the cymbals until he has a chance to pluck up a new one. He also broke… well… just about everything. He chewed a massive chunk off a broken stick before pitching the whole lot behind him, and late in the set, ended up standing to drum furiously. I thought that was just part of the vigour with which he was playing, but then he booted bits of the kit over, and it turns out he’d busted his kick drum. “This happens every time we play the Commodore,” Bossley admitted after asking for a replacement or fix. Bass player Daniel Knowlton held aloft the shiny tambourine he had been playing earlier, and said, “We can use this Prince tambourine.” I had noticed earlier that the tambourine had a gold Prince symbol on its face, a subtle tribute (after the last time I saw them play where they gave a less subtle tribute to Bowie just days after he passed – our fallen soldiers of music). Someone came out to try and hack a fix out using duct tape, to which Bossley gave kudos. “Duct tape, the solution, the final solution.” They tried to head into the next song but within the first couple bars, the duct tape failed, and a frustrated-looking Holt stood back up again and just drummed without it, as Bossley hopped briefly into the crowd for a quick wander. 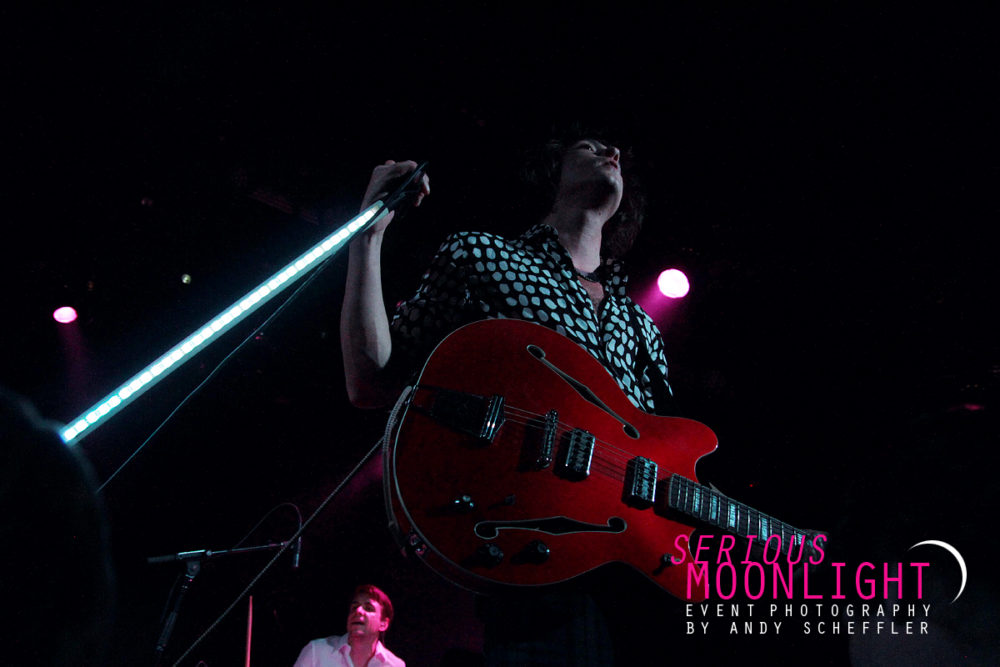 Soon enough, it was time. Oh, it was time! Out came Age of Electric to great fanfare, playing a set that consisted predominantly of material from the 90s, interspersed with a trio of new songs from the album the band has quietly been working on. While Todd Kerns (whose hair is ridiculous, by the way – long, black and flung frequently in a huge dark arc around his head) does the majority of the speaking on stage, and is still delightfully dorky for being so cool, it is interrupted frequently by oddball comments from drummer Kurt Dahle, or his brother Ryan clinking beer bottles or chatting with people in the front couple rows. Clearly though, despite whatever caused them to part ways long ago that has since been well-buried, as they have a great rapport on stage and above all, seemed to be having a ton of fun, laughing with each other, and just being on stage together again. Someone hucked a star-spangled black scarf at them, which Todd picked up, remarking that it looks like something he would wear, but it would look much better on Kurt (yeah I am going to have to move to first names here since it’s a pair of brothers). He strolled back to the drum riser and spent some time artfully wrapping the scarf around Kurt’s head. I’ve gotta hand it to him, he drummed for quite a while with that thing wrapped around his head like a granny though I somehow missed the point where it migrated back to the front of the stage, eventually ending up wrapped around Todd’s mic stand a la Aerosmith. Between Todd and Ryan Dahle, there are two really distinctive lead voices, either playing off each other in choruses, or at the helm of various songs. Todd’s loud, throaty rock n roll warble against Ryan’s slightly subtler metallic-hitchy voice. And there’s John Kerns on bass, still amazingly playing his guitar down by his ankles. From my perch midway back in the room, I simply couldn’t see him a lot of the time, but when he did pop upright for a while, he often threw a goofy face or smile around at his bandmates or the room. At some point, while Todd was standing at the mic singing his heart out, the other three were crowded around the drum riser chugging beers while somehow still sort of playing. 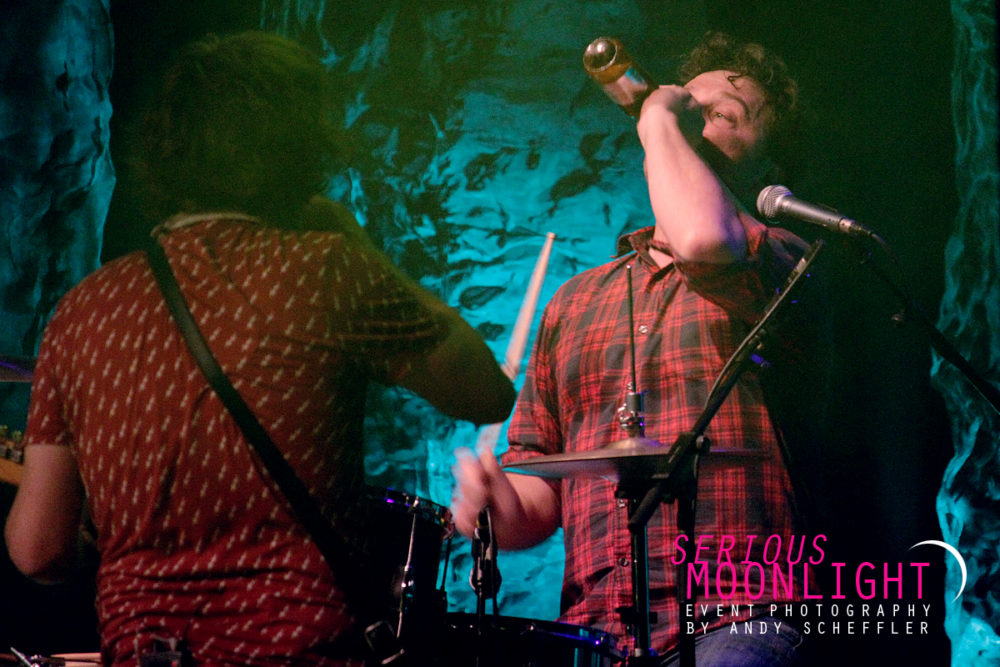 Spontaneously, the band erupted into snippets of songs like Aerosmith/Run DMC’s “Walk This Way” or Honeymoon Suite’s “New Girl Now,” all seemingly instigated by Kurt. Todd waxed nostalgic about the good old days following the “Walk This Way” bit. “Remember when MTV had music videos? …I come back up to Canada and MuchMusic is the same shit now. 16 & Pregnant is so much more interesting than Run DMC doing Aerosmith, right? Not!“A little later, they discussed what the new album might be called. Todd pointed at Ryan and shouted, “What’s the new album called? Quick, off the top of your head!” Ryan stepped to the mic with a grin. “Good shit.” He did the same to Kurt, who answered with “Hi how’ve you been?” This devolved into some discussion about order a pizza, and being at restaurants where the server waits until you have a mouth full of food before coming over to ask you, “How is that tasting?” Todd seemed to half-apologize to the crowd, saying, “This is the show – we play 6 songs, and then the rest of the show is this nonsense. Then we take requests. If you think we don’t know Honeymoon Suite, you’ve got another thing coming…” Never mind, they are having a blast up there. They even pointed out how serious they are about this reunion, in that they hired their original guitar tech to work the show. The quirky banter ended abruptly with Todd declaring, “You all know this one,” before tearing into “Untitled.” They ended the main set with “Ugly,” but Todd and Ryan came out again quickly, saying “There’s no place like home.” They mocked that they were going to do Extreme’s “More Than Words” together, but actually played their tune “Cranky,” pitting those two unique voices against each other. When the rest of the band emerged, it was right back to antics, with Kurt and Todd playing off each other some bit about Alan Jackson songs, but shortly, Ryan and Todd held their guitars aloft and stated those were the same guitars from the video for the following song in 1997. There was a quick round of introductions (as if we don’t know. “Todd Kerns on impossibly high notes and impossible guitar parts,” according to Ryan). They appropriately bid us adieu with “Remote Control,” much to the yelping delight of the audience.

It was great to see these guys back on stage together and working towards a new set of material, which by all indications, really stays true to their original sound. They have their fingers in so many musical pies, but all those projects are so distinct and seem to call to a specific character of the individual members, but together, for good fun Canadian rock n roll, they are Age of Electric.