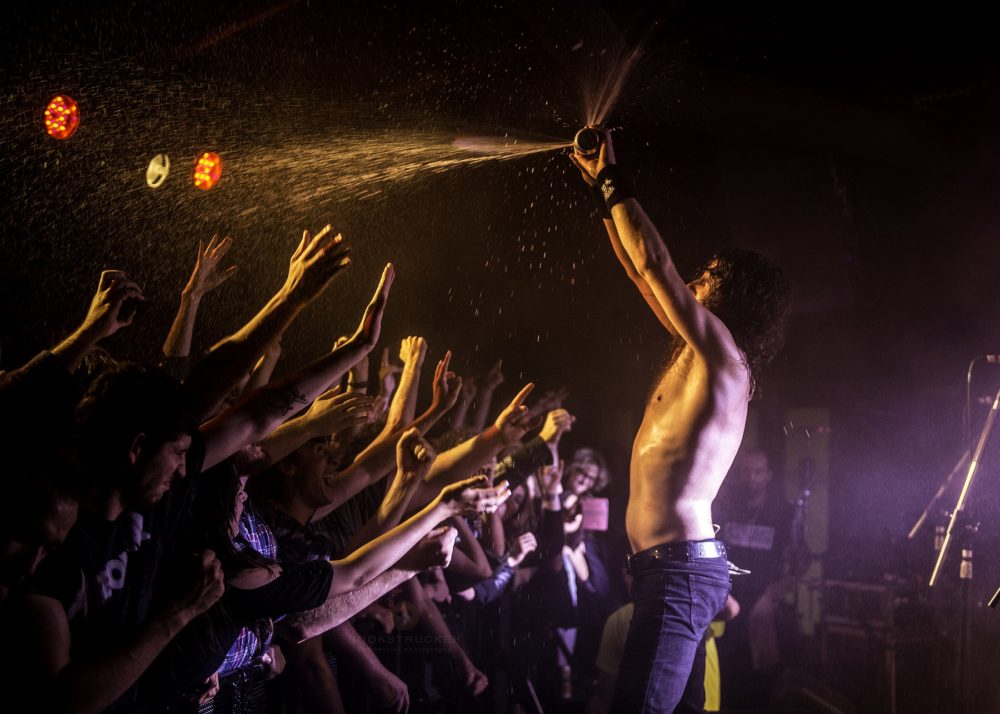 The room was full of excitement and ready to ROCK at the Gateway in Calgary! Opening act,The Wild, a rock band hailing from Kelowna, British Columbia, fully revved up with those in attendance. It was clear they had a lot of their own fans in the crowd singing enthusiastically along to their music. They played a great set! Keep an eye out for these guy, and if you can, catch them live.

Joel took the stage with the help of crutches, the result of a mishap that involved him falling off the stage at a previous show. There had been talk of cancelling, but Joel and the band would not let the fans down.The show must go on! There was an expectation that Joel would need to be sitting for most of the performance; similar to what fans have seen previously from Dave Grohl or Axl Rose. However, Joel just leaned his crutches up to the stack of Marshalls and gave it his all. It was amazing to watch him perform with his leg in a cast and no sign of holding back. At one point, Joel even managed a Chuck Berry style hop across the stage. Airbourne started the show with, Ready To Rock, which got the crowd super lit up and ready to go! The crowd’s energy was consistently high for the entire set with fans in the front row singing along to every word he belted out.

Airbourne will be releasing their forthcoming LP, Breakin Outta Hell, on Sept 23, 2016. The record was produced by Bob Marlette and mixed by Mike Fraser. When Airbourne played the lead single, Breakin Outta Hell, the crowd sang along and didn’t miss a lyric. Some entertainment news blogs have suggested that Joel O’Keeffe could do a good job filing AC/DC’s retired lead singer, Brian Johnson’s, shoes. Joel’s voice is certainly reminiscent of Johnson’s, but after seeing Airbourne as a band tonight, it’s clear they have their own sound and style. After the band played its set they came out for an encore which included Joel showering the crowd with a few beer. No one seemed to mind as you can see from the ear to ear smiles in the photos. The show ended with Joel shouting a lyric from Raise The Flag to the audience, “As long as you’re alive and we’re alive, Rock’n’Roll will never die!”.