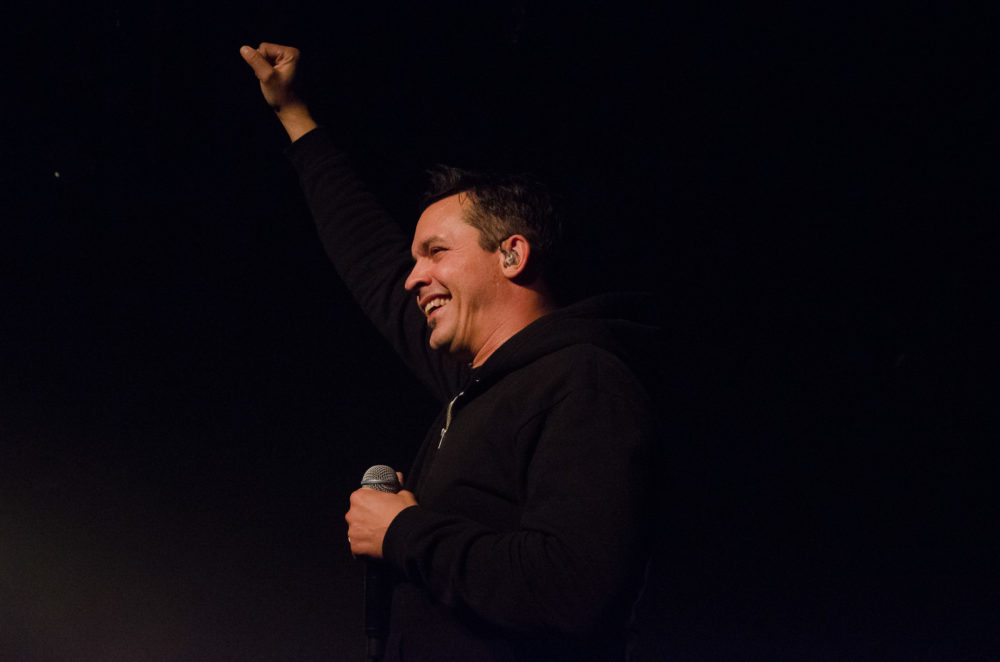 On Wednesday night in Vancouver, Rhymesayers Entertainment took over the Commodore Ballroom bringing some familiar and much-loved faces together: Brother Ali and Atmosphere. It was Minnesota charm, fan-service, and a healthy dose of #DadRap all evening long.

Rhymesayers Entertainment is a Minneapolis-based record label that’s persona appears more rap collective than industrial talent machine. With artists like Aesop Rock and MF Doom on their roster, you’d be remiss to label it backpack rap but you would not be alone. What Rhymesayers – and their artists – represent is an earnest desire to propagate the hip hop seed.

Taking the stage before Atmosphere was long-time collaborator Brother Ali. Ali is known for his rich storytelling through rap with strong political and religious themes. It’s also noteworthy that he stands tall and proud as an overweight, Muslim, albino rapper: he’ll be the first and last person to reiterate all of this, as he did on Wednesday night.

Focusing largely on his earlier work, Brother Ali encouraged the crowd to hold the sentiment that the night’s events were not “a show [but] a party” for everyone to be involved in. His responsibilities as opener seemed to lie in warming up the crowd more than flexing his own talent. Performing “Tight Rope” and “Forest Whitaker”, Ali threw only the hits at the crowd with most of them landing.

The one downfall of his set would have to be in his revisions of earlier work. As a devout Muslim, Brother Ali seems to be editing his past work to better reflect his commitment to God. In “Truth Is..” for example, he glazed over the chorus that contains the phrase “God damn it”, and removed another line in its entirety that says “I’m the pure and raw: uncut / Who the fuck wants what?”. I can understand writing material early on in your career that you may not agree with later but could his devotion to God be interfering with his art?

Brother Ali finished strong with a clever adlib – “we don’t gotta be on the same religious level / but we can all agree that Donald Trump is the devil.” – before handing the mic off to Slug and Ant of Atmosphere.

Why do people love Atmosphere? Because Atmosphere loves their people. This was displayed in so many ways during their set. From the constant gratitude towards their audience to the hokey-yet-effective injections of “Vancouver” or “B.C.” into lyrics, Slug knows what fans want.

Dropping old hits very early on – “God Loves Ugly”, ”Happy Mess” – helped hype the crowd before a few dips during some newer material that hasn’t quite permeated through their fan base yet (their newest album being just a month old). With over two decades in the industry, Atmosphere is at no loss for material but does an excellent job satisfying both new and old fans alike.

The greatest asset to their show is how genuine it all appears. Slug’s passion oozes through his delivery, a friend of mine commenting that he “spits and holds the mic like his life depends on it”. The group insists on making each show appear to be unique and dedicated to that one night of performance by dropping freestyles and rapping a capella. Ant, Slug and all of their collaborators truly seem to doing it for the love of music above all else.

The highlight would have to be during the third verse of “Little Man” in which Ant cut the beat to have Slug finish off the song alone, front of stage. “No heavy rotation / In any location / You’re not ready to face that you have no steady vocation / Plus you’re getting old, your raps are exhausted / Stop it, everybody knows that you’ve lost it”. From the audiences reaction to this verse – and many others – it’s quite obvious that Slug hasn’t lost it at all. In fact, at the tender age of 44, he may be at the pinnacle of his career.

Although their image and sound may be built on a history of self-destructive tendencies, Atmosphere is a resilient act dedicated to the craft of hip hop. With any luck, Rhymesayers will continue their domination of the alt-rap scene with Atmosphere at the helm.