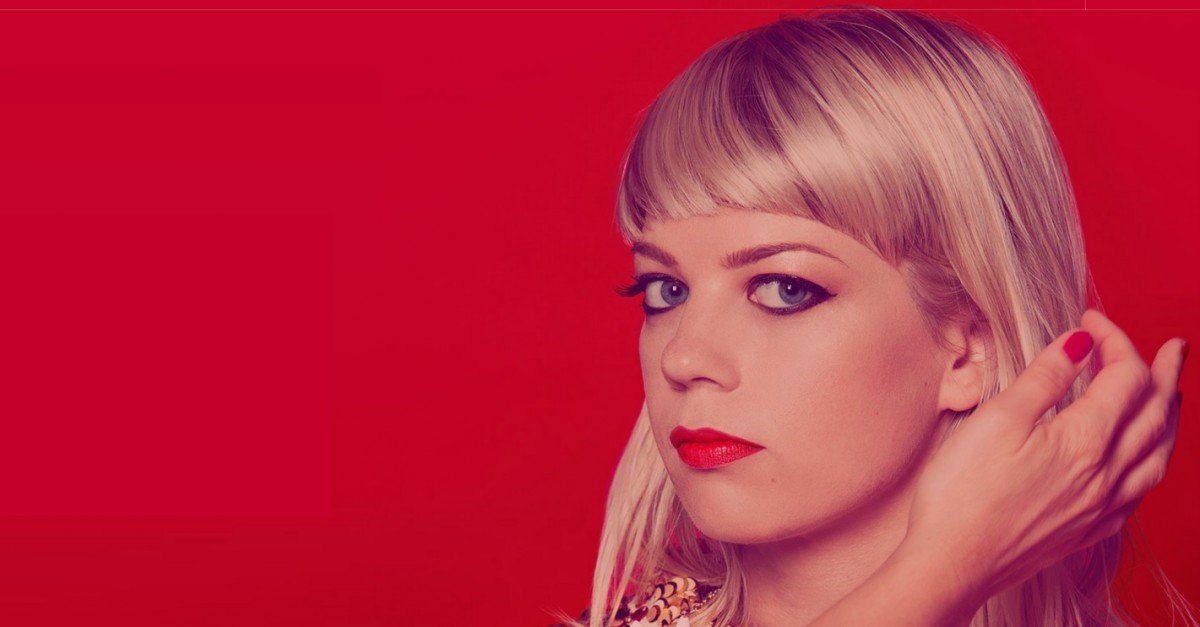 Two years goes by quickly but it still feels like forever since I saw Basia Bulat play at the Rio.  With a new album (Good Advice) out, she embarked on a North American tour landing her in Vancouver with local musician Malcolm Jack at Fortune Sound Club.  Though Fortune wouldn’t be my first guess as to where Bulat might be playing, the prospect of hearing her music on their sound system was enticing to say the least.

I’d never seen Malcolm Jack play but I assumed it would be something folk-y, as to fit in with the “MRG Concerts West & Vancouver Folk Music Festival present” headline.  I was kind of surprised with how short his set was but I’ve always found it really hard to get into an artist playing electric guitar on stage, solo; it just never sounds right to me.  Hints of Ariel Pink and Kurt Vile clicked with me, which was nice but just not really my thing.  Gotta say though, it’s still annoying to have a packed venue for a sold out show all talking over each other while someone’s performing.  Even if you don’t like them, or aren’t interested in the openers, it doesn’t mean you should just yell overtop everyone around you.  Go outside, stay at home, whatever works best; just keep your loud spilling of your guts about your day to a minimum while someone’s playing for you.

Thankfully the collective mouth of the room clamped shut when Bulat took the stage.  Good Advice is born from a break-up, at least from what seems to be expressed in song and read in interviews I’ve read online, though you may not be able to tell it from the surface.  Some song titles (‘La La Lie’, ‘Long Goodbye’, ‘Fool’) might reflect what the lyrics tell but the music has an upbeat pace and a lot of bright sounds mainly focused in the keys/synths that have seemingly replaced the autoharp and other stringed instruments in previous albums.  Produced by My Morning Jacket’s Jim James (whom I love as well), it sounds a bit throwback but Bulat’s voice pulls the pop album back into the presence, moving forward from what she’s just been through, and that night she was going to share her Good Advice.

Bulat looked tiny on stage, more so when holding her guitar, and opened the set with ‘Fool’ from her latest album.  Looking as vibrant as her singing in her gold sequin cape/cloak/whatever-it’s-called-these-days (which I thought was a dress at first), Bulat’s voice was strong as ever singing “I’m still your fool,” reflecting lingering feelings from what she’d just went through.  ‘Let Me In’ keeps the narrative running, giving more insight as to why she still a fool.  This is definitely one of the songs that has a sadness behind the lyrics but has such a bright sound from the electronic bubbles of sound.  Bulat got onto the keyboard, where she was nearly invisible from the crowd (and so she made a vocal mental note to get a riser next time), and they played ‘Long Goodbye’, which gave less of a lovelorn feeling and makes you want to dance the pain of what was lost away.

‘In The Name Of’ leans harder on the gospel side of things, though it didn’t come across as much live without back-up singers (her band members’ mics didn’t really give the same kind of power that the back-ups on the album do) and unfortunately her bassist seemed to have an issue part-way through which made me say to my friend Adrian, “This song feels kind of empty…”.  No bass explained my feeling perfectly.  Another upbeat sounding song, ‘La La Lie’, and the careful, slow-paced ‘Time’ ended the streak of Good Advice, giving a solid idea of the sound of the album.  Bulat was now going to throw back to the beginning with the title track of her first album Heart Of My Own.  Easily one of my favourite songs of hers, I was singing along with many others as the song drove along to the pounding of the bass drum.  The song doesn’t quite have the edge it does on the album when it’s performed by a band that’s more formed around the sound of the newer albums but it still gives me the same feeling with her strong voice leading it.

Tall Tall Shadow was an excellent album and Bulat’s finger-work on the guitar for ‘Five, Four’ sounds just as amazing live as it does on the album though the audience may not have been as good as back-up singers with our “ooo”s.  Bulat’s backing band left the stage as she played ‘If Only You’ (Heart Of My Own), ‘Little Waltz’, and ‘In The Night’ (both from Oh, My Darling).  We sang along with the upbeat ‘If Only You’, did our own waltz-in-place to ‘Little Waltz’, and cheered for the appearance of the autoharp on ‘In The Night’.

The band returned for the title track from Good Advice, which I loved even though I wasn’t a fan of the tone on her keys.  As one could assume from being a title track, ‘Good Advice’ the song definitely seemed to me to be the culmination of all the changes that came with this album both in Bulat’s life and sound.  Another title track followed with ‘Tall Tall Shadow’ which is easily one of my favourite songs to come out in the past few years and one that has been a highlight both times I’ve seen Bulat play live.  The set ended with the last song from Good Advice that evening, ‘Infamous’, which has an anthem-y sound to it and was a great set-ender.

The encore had Bulat coming back out with her charango finger-picking like crazy on the always awesome ‘It Can’t Be You’ from Tall Tall Shadow.  The audience was singing along and when she caught us trying to keep up with her “ooo”s, she did a back and forth that, while maybe not quite in tune still sounded amazing in that concert-sing-along way.  ‘Before I Know’ was hard to play on autoharp while in a cape, or so Bulat confessed, but it was a beautiful in-between before things were capped off with ‘Wires’ from Tall Tall Shadow.  I always loved the song but when she’s belting it out into that distortion mic, it comes at your even more powerful and heartfelt.  Bulat killed it on ‘Wires’ and ended on a high note.

Again I was really impressed with the amazing work Bulat and her band did and the sound they put out.  With such a strong, beautiful voice, she’s one of my favourite artists out there right now and I hope that she keeps selling out shows and getting the attention she deserves.  I hope that whatever heartbreak she just experienced is healing well, even though it made yet another amazing album for her.  Basia Bulat is a must-see in my books; she’s an absolute sweet-heart on stage and her voice and presence makes joy pretty infectious.  So if you’re along the tour route, go out and listen.