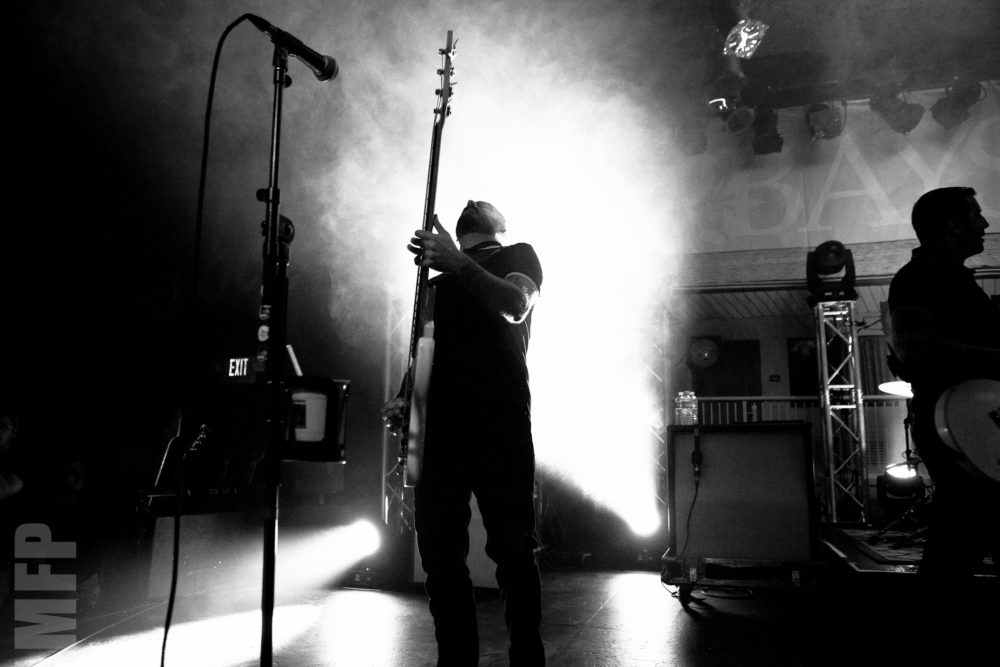 It’s Labor Day weekend, which means there are a ton of things to do. The home team is in town, a huge music festival and the gaming convention are all options. This puts a person such as myself in a weird position, there are just too many people at those events in giant open spaces. When I saw that Bayside was coming with The Menzingers in tow I knew that I’d found my choice for the first evening of the long weekend.

Sorority Noise came on stage and kicked things off with a solid set. I didn’t know much about the band going into the show, but I’ve been listening to their music since I got home. A blend of upbeat rhythms hiding the less than happy lyrics helps ease down the potential discomfort of addressing certain topics. One of those topics being death, which lead singer Cameron Boucher addressed by saying the one of the songs was about the death of a high school friend, and that it’s okay to talk about. One part Weezer and a huge part exposed emotional nerve, their performance was raw and got everyone’s attention. They have only been around for three years and I see big things for them in the future.

The Menzingers came out next and kicked things off with the ultimate get pumped speech of all time, the President’s speech from Independence Day. And they lived up to the expectation placed on the situation by the speech. The set blasted out of the gates with “The Obituaries”, a song that grabs fans with its easy to remember and effective chorus getting everyone to sing along, even those who don’t know the song. They continued the momentum by diving straight into “I Was Born”, which continued the theme of relatable and amazing songs. They played two songs off their upcoming album After the Party, “Lookers” and “”Thick as Thieves”, both of which fit in with their past work. The set was energetic and left the crowd wanting more.

That yearning for more was satisfied, but by the headliner Bayside. Who came out to the theme song of the amazing series Stranger Things, with the stage backlit in red, to evoke the title sequence of the show. Some might wonder why they chose this song to prime the audience for their set, well side note time. The original title of Stranger Things was Montauk, which is also a title of a Bayside song and an air force base in Long Island where the band is from. Bayside always puts on an energetic live show, delivering performances that never let down. Burning through a set list that would make any fan happy, even throwing in a cover of “Mr. Brightside” by The Killers, which sounded amazing. The crowd was moving and singing along the entire show, losing their voices from “Sick, Sick, Sick” all the way through “Pretty Vacant” and “Devotion and Desire”. Bayside continues to solidify their place in rock, beyond the emo label applied to them during the early 2000s by putting out well written music with personal lyrics.

Bayside’s new album Vacancy is out on Hopeless Records and is really worth a listen.